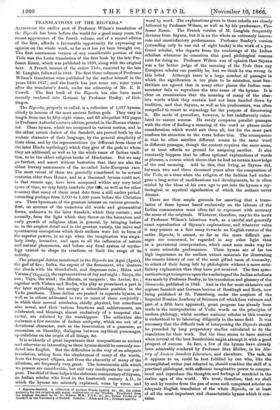 TRANSLATIONS OF THE RIGVEDA.*

ALTHOUGH the earlier part of Professor Wilson's translation of the Rigveda has been before the world for a good many years, the recent appearance of the fourth volume, and of a second edition of the first, affords a favourable opportunity for expressing an opinion on the whole work, as far as it has yet been brought out. The first continuous version of any considerable portion of this Veda was the Latin translation of the first book by the late Pro- fessor Rosen, which was published in 1838, along with the original text. A French version of the entire Veda, executed by the late M. Langlois, followed in 1848. The first three volumes of Professor Wilson's translation were published by the author himself in the years 1850-1857; and the fourth has just come out, some years after the translator's death, under the editorship of Mr. E. B. Cowell. The first book of the Rigveda has also been more recently rendered into German by Professor Benfey, of Got- tingen.

The Rigveda, properly so called, is a collection of 1,017 hymns, chiefly in honour of the most ancient Indian gods. They vary in length from one tofifty-eight verses, and fill altogether 912 pages in Professor Aufrecht's octavo edition, printed in the Roman charac- ter. These hymns, which are composed in various metres, and in the oldest extant dialect of the Sanskrit, are proved both by the archaic character of their language, by the general simplicity of their ideas, and by the representations (so different from those of the later Hindu mythology) which they give of the gods to whom they are addressed, as well as by the whole tenor of Indian tradi- tion, to be the oldest religious books of Hindustan. But we may go further, and assert without hesitation that they are also the oldest literary monuments of the so-called Indo-European race. The most recent of them are generally considered to be several centuries older than Homer, and as a thousand hymns could not, in that remote age, have been composed within any very brief space of time, we may fairly conclude (for Ufa, as well as for other reasons) that many of them must date from a still earlier period, extending perhaps from 2,000 to 1,500 years before the Christian era. These hymns are of the greatest interest on various grounds ; first, on account of the numerous old words and grammatical forms, unknown to the later Sanskrit, which they contain ; and secondly, from the light which they throw on the formation and early growth of religious ideas in general, by bringing before us, in the amplest detail and in the greatest variety, the naive and spontaneous conceptions which their authors were led to form of the superior powers, in an age when the imagination was singu- larly lively, inventive, and open to all the influences of nature and natural phenomena, and before any fixed system of mytho- logy existed to shape its creations or limit the range of its activity.

The principal deities mentioned in the Rigveda are Agni (Ignis), the god of fire ; Indra, the regent of the firmament, who shatters the clouds with his thunderbolt, and dispenses rain ; Mitre and Varuna (' OugavOc), the representatives of day and night ; Sarya, the sun ; Vayu, the wind ; the Martini, or tempests ; the Asvins, &c. ; together with Vishnu and Rudra, who play so prominent a part in the later mythology, but occupy a subordinate position in the Vedic pantheon. These deities are praised in separate hymns, as well as in others' addressed to two or more of them conjointly ; in which their several attributes, chiefly physical, but sometimes also moral, and their various functions and achievements, are celebrated, aud blessings, almost exclusively of a temporal cha- racter, are solicited by the worshippers. The collection also embraces a few remains of Indian antiquity, which are not of a devotional character, such as the lamentation of a gamester, an encomium on liberality, dialogues between mythical personages, speculations on the origin of all things, &c.

It is evidently of great importance that compositions so ancient and otherwise so interesting as these hymns should be correctly ren- dered into English. But the difficulties in the way of an adequate translation, arising from the obsoleteness of many of the words, from the frequent ellipses, and from the obscurity of many of the allusions, are frequently very great. The hermeneutic aids which _ we possess are considerable, but still very inadequate for our pur- pose. The chief of these helps is the elaborate commentary of Sayana, an Indian scholar who lived in the fourteenth century A.D., in which the hymns are minutely explained, verse by verse, and

• Rigreda-Sanhito. A collection of ancient Hindu hymns, de., An, the oldest authorny for the religious and social institutions of the Hindus. Translated Coin the original Sanskrit by H. H. Wilson, ILA., PALS., &a, do., Soden Profesior of Sanskrit in the University of Oxford. London : Allen and Co.; Triiimer and 0o. word by word. The explanations given in these scholia are closely followed by Professor Wilson, as well as by his predecessor, Pro- fessor Rosen. The French version of M. Langlois frequently deviates from Sayana, but it is on the whole an extremely inaccu- rate and unsatisfactory performance. Professor Benfey's version (extending only to one out of eight books) is the work of a pro- found scholar, who departs from the renderings of the Indian scholiast whenever he conceives that good philological reasons exist for doing so. Professor Wilson was of opinion that Sayan& was a far better judge of the meaning of the Veda than any European scholar can possibly be, but we think he was wrong in this belief. Although there is a large number of passages in which the signification is too plain to be mistaken, most San- skritists are agreed that in many other places the Indian com- mentator fails to reproduce the true sense of the hymns. It is clear on examination that the meaning of many of the obso- lete words which they contain had not been handed down by tradition, and that Sayana, as well as his predecessors, was often compelled to resort to etymology for the purpose of discovering it. His mode of procedure, however, is but indifferently calcu- lated to ensure success. He rarely compares parallel passages with the view of finding a meaning of the word or phrase under consideration which would suit them all, but for the most part confines his attention to the verse before him. The consequence is that he often ascribes different senses to the same word in different passages, though the context requires the same sense, or at least affords no ground for assigning another. It also constantly happens that he offers optional explanations of words or phrases, a course which shows that he had no certain knowledge of the real meaning. Add to this, that living, as Sayana did, between two and three thousand years after the composition of the Veda, at a time when the religion of the Indians had under- gone a long series of modifications and developments, he is often misled by the ideas of his own age to put into the hymns a my- thological or mystical signification of which the authors never dreamt.

There are thus ample grounds for asserting that a trans- lation of these hymns based exclusively on the labours of the Indian commentator mast often fail to represent with accuracy the sense of the originals. Whatever, therefore, may be the merit of Professor Wilson's laborious work, as a careful and generally exact reproduction of Sayana's explanations, and whatever value it may possess as a first essay towards an English version of the entire Rigveda, it cannot, so far as the more difficult pas- sages are concerned, be regarded in any other light than as a provisional interpretation, which must soon make way for a more scientific performance. These hymns are of far too high importance as the earliest extant materials for illustrating the remote history of one of the most gifted races of humanity, to admit of their being left by philologists without a more satis- factory explanation than they have yet received. The first syste- maticattempt to improve upon the renderingsof the Indian scholiasts was made by Professor Benfey, in his translation and glossary of the Stanaveda, published in 1848. And in the far more extensive and copious Sanskrit and German lexicon of Boetlingk and Roth, now being published at St. Petersburg, under the -auspices of the Imperial Russian Academy of Sciences (of which four volumes and part of a fifth have appeared), great progress has already been made in the inteiretation of Vedic words on the principles of modern philology, whilst another eminent scholar in this country is understood to be labouring diligently in the same field. It was necessary that the difficult task of interpreting the Rigveda should be, preceded by long preparatory studies calculated to fit the translators for their work. Bile the time seems to have arrived when several of the best Sanaluitists might attempt it with a good prospect of success. In fact, a few of the hymns have already been admirably rendered by Professor Max Muller, in his His- tory of Ancient Sanskrit Literature, and elsewhere. The task, as it appears to WI, could be best fulfilled by one who, like the accomplished writer just referred to, should combine the skill of a practised philologist, with sufficient imaginative power to compre- hend and reproduce the thoughts and feelings of mankind in the earlier ages of the world. We trust, therefore, that we shall by and by receive from the pen of some such competent scholar an adequate English translation of the whole Rigveda, or at least of all the most important and characteristic hymns which it con- tains.