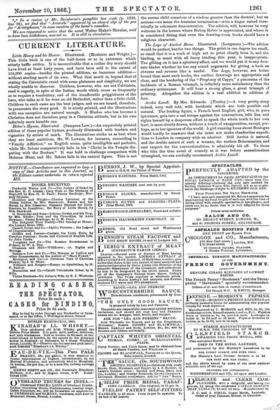 Little Henry and his Bearer. Illustrated. (Houlston and Wright.)— This little book is one of the half-dozen or so in existence which utterly baffle critics. It is inconceivable that a rather dry story should have lived at least forty years, and have been sold to the extent of 160,000 copies—besides the pirated editions, an immense addition— without sterling merit of its own. What that merit is, beyond that of stating the Calvinistic creed with some plainness and simplicity, we are wholly unable to discover. Children, however, who are not Calvinists, read it eagerly, in spite of the Indian words which occur so frequently as to require a vocabulary, and of the insufferable priggishness of the hero, who talks as if he were an old Methodist, rather than a little child. Children in such cases are the best judges, and we are bound, therefore, to pronounce the story good. It is nicely printed, and the illustrations with one exception are natural enough. A Hindoo who has become a Christian does not therefore pray in a Christian attitude, but in his own infinitely more humble one.