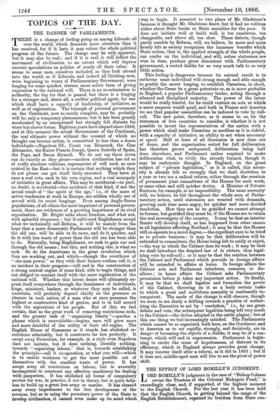 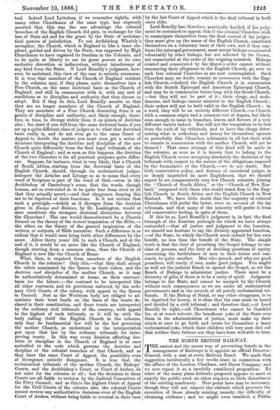 LORD ROMILLY'S judgment in the case of "Bishop Coleus° versus the Trustees of the Colonial Bishopric Fund," is exceedingly clear, and, if supported, of the highest moment to the English Church. For the last year it has been held that the English Church, in getting beyond the range of the English Establishment, regained its freedom from State con-

trol. Indeed Lord Lyttelton, if we remember rightly, with many other Churchmen of the same type, has expressly asserted that this was the one advantage the colonial branches of the English Church did gain, in exchange for the loss of State aid and for the grant by the State of ecclesias- tical powers of jurisdiction. To use Archbishop Whately's metaphor, the Church, which in England is, like a tame ele- phant, guided and driven by the State, was supposed by High Churchmen to have regained its freedom in the Colonies, and to be quite at liberty to use its great powers at its own exclusive discretion or indiscretion, without interference of any kind from the State. If Lord Homily's judgment, how- ever, be sustained, this view of the case is entirely erroneous. It is true that members of the Church of England resident in the colonies may, if they please, unite themselves into a Free Church, on the same doctrinal basis as the Church of England, and still in communion with it, with any sort of c,onditions as to discipline and authority that they choose to adopt. But if they do this, Lord Homily assures us that they are no longer members of the Church of England. They are members of a Free Church dissenting from it on points of discipline and authority, and likely enough, there- fore, in time, to diverge widely from it on points of doctrine also ; for, start if you will from the same doctrinal basis, if you set up a quite different class of judges as to what that doctrinal basis really is, and do not even go to the same Court of Appeal to decide the matter, you must soon get a series of decisions interpreting the doctrine and discipline of the new Church quite differently from the final legal tribunals of the Church of England ; and as soon as this happens, the doctrine of the two Churches is for all practical purposes quite differ- ent. Suppose, for instance, what is very likely, that a Church of South Africa, starting from the doctrinal basis of the English Church, should, through its ecclesiastical judges, interpret the Articles and Liturgy so as to mean that every word of Scripture is part of the word of God,—even in the Archbishop of Canterbury's sense, that the words, though human, are so over-ruled as to be quite free from error in all that they actually assert,—and that clergymen denying this are to be deprived of their functions. Is it not certain that such a principle,--widely as it diverges from the decision given in Essays and Reviews, by Dr. Lushington, would at once constitute the strongest doctrinal distinction between the Churches?. The one would thenceforward be a Church formed on the theory of the textual inspiration of the Bible,— the other, on the theory of the general inspiration of the writers, or subjects, of Bible narrative. Such a difference is so radical that it would soon bring forth other differences by the snore. Allow thirty years' life to such a Church, and at the end of it, it would be no more like the Church of England, though starting from a common stem, than the Church of England is now like the Church of Rome.

What, then, is required from members of the English Church in the colonies? Only this,—that they shall accept the rulers nominated, by the Queen as their rulers, and the doctrine and discipline of the mother Church, as it may lite authoritatively determined at home, as their contract- basis for the future ;—the contract to be interpreted like all other contracts, and its provisions enforced, by the ordi- nary Civil Courts of 'the colony, with appeal to the Queen in Council. Just as the Wesleyan body are obliged to ad- minister their trust funds on the basis of the trusts de- clared in their constitution, and those trusts are interpreted by the ordinary civil tribunals of the country, with appeal to the highest of such tribunals, so it will be with the body calling itself the English Church in the colonies, only that its fundamental law will be the law governing the mother Church, as understood in the interpretation put upon that law by the ordinary tribunals for inter- preting trusts. In this way every decision affecting doc- trine or discipline in the Church of England is at once embodied in the code which governs the doctrine and clicipline of the colonial branches of that Church, and as they have the same Court of Appeal, the possibility even of divergence entirely disappears. It is true that the ecclesiastical tribunals of the mother Church, the Bishops' Courts, and the Archbishop's Court, or Court of Arches, do not exist for the colonies at all ; but the decisions in these Courts are all liable to revision by the Judicial Committee of the Privy Council; and as this is the highest Court of Appeal for the Civil Courts of the colonies also, the colonial Courts cannot reverse any authoritative decisions even of the English by the last Court of Appeal which is the final tribunal in both cases alike.

Lord Romilly has, therefore, practically decided, if his judg- ment be sustained on appeal, that if the colonial Churches wish to emancipate themselves from the final control of lay judges, they must give up the name of the English Church, constitute themselves on a voluntary basis of their own, and if they con- tinue the episcopal government, must accept bishops consecrated voluntarily by other bishops, but not selected by the Crown, not consecrated at the order of the reigning monarch. Bishops created and consecrated by the Queen's order cannot, without renouncing their allegiance to the English Church, go over to such free colonial Churches as are now contemplated. Such Churches may, no doubt, remain in communion with the Eng- lish Church,—indeed, the English Church is in communion with the Scotch Episcopal and American Episcopal Church, and may be in communion before long with the Greek Church, —but they will not be part of it ; their clergy, and arch- deacons, and bishops cannot minister in the English Church ; their orders will not be held valid in the English Church ; in a word, they will be an entirely different Church,—a Church with a common origin and a common root of dogma, but likely soon enough to issue in branches, leaves, and flowers of a very different variety indeed. But will not the temptation to be free from the curb of lay tribunals, and to have the clergy deter- mining what is orthodoxy and heresy for themselves, operate so powerfully that Churches, schismatic in all but their wish to remain in communion with the mother Church, will yet be formed ? That some attempt of this kind will be made in the colonies, as soon as it is known that to belong to the English Church means accepting absolutely the decisions of lay tribunals with respect to the nature of the obligations imposed by the formularies of the Church,—we do not doubt. But both conservative policy, and distrust of sacerdotal judges, is so deeply imprinted on most Englishmen, that we should expect to see comparatively very few Church colonists joining the "Church of South Africa" or the "Church of New Zea- land," compared with those who would stand firm to the Eng- lish Church in South Africa and the English Church in New Zealand. We have little doubt that the majority of colonial Churchmen will prefer the latter, even on account of the lay tribunals, and that many of the minority will prefer it from old conservative feeling, in spite of them.

If this be so, Lord Hominy's judgment is, in fact, the final triumph of the Erastian principle for which we have always contended,—that all justice and judgment is the function, we should not hesitate to say the divinely appointed function, —of the State, to which the Church must submit for her own benefit, no less than the benefit of the State. The simple truth is that the duty of preaching the Gospel belongs to one class of persons, and the duty of deciding questions of equity concerning the faithfulness of men to their duties and con- tracts, to quite another. Men who preach, and who are good preachers, will rarely, if ever, make good judges. You might as well set the judicial Bench to spread the Gospel, as set the Bench of Bishops to administer justice. There must be a diversity of gifts, if there is to be a unity of spirit. Judgment belongs to the State, and cannot be usurped by the Church without such consequences as we see under all ecclesiastical governments and in the records of all purely ecclesiastical tri- bunals. If the Bishop of Natal, or any other clergyman, is to be deprived for heresy, it is clear that the case must be heard and decided by a civil tribunal ; and therefore that,—if Lord Romilly be right,—all Churchmen who cannot be thankful for, or at worst tolerate, the beneficent yoke of the State over them in the administration of justice, must make up their minds at once to go forth and create for themselves a fancy ecclesiastical yoke, which their children will very soon find out that neither their fathers nor they have been well able to bear.