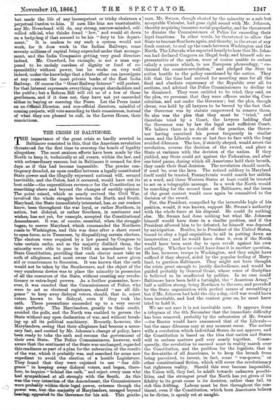 THE CRISIS IN BALTIMORE..

THE importance . of the great crisis so hardly averted in Baltimore consisted in this, that the American revolution threatened. for the first time to overstep the bonds of legality altogether. The most anxious efforts have been made by the North to keep it, technically at all events, within the law, and with extraordinary success; but in Baltimore it seemed for five days as, if this had become impossible. The precise con- tingency.dreaded, an open conflict between a legally.constituted State .power and the illegally expressed. national will, seemed inevitable, and the Union, had it occurred, would have cut its best cable—the superstitious reverence for the Constitution as something above and beyond the changes of earthly opinion. The point raised, which so nearly revived the Orvil War, involved the whole struggle between the North and South. Maryland; the State .immediately interested, has, as our readers know) been throughout the war loyal, or rather Northern,. in action, bat disloyal, or rather Southern, in sentiment and wishes; has not yet, for- example, accepted the Constitutional Amendment, It was, of course, essential, when the struggle began; to coerce Maryland, which commanded the Northern roads to Washington, and this was done after a short resort to open. force, as in Tennessee, by disqualifying certain electors. The electors were required by a law passed by. Congress to take certain oaths, and. as. the majority disliked them, the minority were able to pass in 1864 an amendment to the State.Constitution, providing that each elector must take an oath of allegiance, and must swear that he had never given aid or countenance to Secession. It was known that the oath would not be taken by the Southerners, and the object of the very. cumbrous device was to place the minority in possession of all the resources of the State, without creating any revolu- tionary or extra-legal powers. As a- further guarantee, how- ever, it was enacted that the Commissioners of Police, who were to act as electoral registrars, should "use all dili- gence" to keep away disloyal voters, should, that is, reject voters known to be disloyal, even if they took the oath. These precautions succeeded up to a very recent date perfectly. The Marylanders, greatly to their credit, avoided the polls, and the North was enabled to govern the State without any open declaration of war, and without break- ing up all its political machinery. Recently, however, the Marylanders, seeing that their allegiance had become a neces- sary fact, and. excited by Mr: Johnson's, change of policy, have been ready to take the oath and resume the government of their own State: The Police Commissioners, however, well aware that the sentiment of the State was unchanged, regarded this readiness as part of a plan for the subversion of the results of the war, which it probably was, and searched for some new expedient to avoid the election of a hostile Legislature. They found that they were enjoined to. use "due dili- gence" in keeping away disloyal voters, and began, there- fore, to inquire ." behind the oath," and reject every man who had sympathized at all. strongly with the South. As this was the very intention of- the Amendment, the Commissioners were probably within-their-legal power, extreme though the power was, but the majority of Marylanders, enraged beyond bearing; appealed to the Gavernor for his. aid. This gentle- man, Mr. Swann, though elected by the minority as a safe but acceptable Unionist, had gone right round with Mr. Johnson, thereby acquiring immense social popularity, and he threatened to dismiss the Commissioners of Police for exceeding their legal functions. In other words, he threatened to allow the State to become Southern again, and thereby, in the event of any fresh contest, to seal up the roads between Washington and the North. The Liberals, who expected hourly to hear that Mr. John- son had declared Congress an illegal body, and himself sole re- presentative of the nation, were of course unable to endure calmly a menace which, to use European phraseology, "en- throned the counter-revolution," and pledged the State to action hostile to the policy sanctioned by the nation. They felt that the time had arrived for asserting once for all the final and absolute supremacy of the Republic over all its sections, and advised the Police Commissioners to decline to be dismissed. They were entitled to be tried, they said, on the plea, we presume, that they were officers under th4 Con- stitution, and not under the Governor ; but the plea, though clever, was held by all lawyers to be barred by the fact that the Governor was by statute empowered to remove them. So also was the plea that they must be "tried," and therefore tried by a Court, the lawyers holding that the Governor was by law the legal and sufficient Court. We believe there is no doubt of the practice, the Gover- nor having exercised his power frequently in similar cases, and the Liberals were at last face to face with the long avoided dilemma. The law, if strictly obeyed, would arrest the revolution, reverse the decision of the sword, and place a State at variance with the decision of the nation. If they yielded, any State could act against the Federation, and after one brief pause, during which all Americans held their breath, they made their final decision. The revolution should march, if need be, over the laws. The retired soldiery in Maryland itself could be trusted, Pennsylvania would march her militia at a word, and three Western States at least could be trusted to act on a telegraphic message. In a week the North would. be marching for the second time on Baltimore, and the issue of the great contest would once again be committed to the decision of the sword.

For, the President, compelled by the inexorable logic of his position, would, it was known, support Mr. Swami's authority with the whole force at his disposal. He could do nothing else. Mr. Swann had done nothing but what Mr. Johnson himself would have done in a similar position, and if the President allowed him to be defeated, he himself was deposed by anticipation. Besides, he is President of the United States, bound to obey a legal requisition, to aid in putting down an insurrection ; and he -would have done it, even, if the North would have been next day in open revolt against his own authority. Whether he could have done it is another question. He has, however, troops in Washington, and they might .-have sufficed if they obeyed, aided by the popular feeling of Mary- land, to garrison Baltimore. They might not have thought the crisis great enough to justify disobedience, and would be guided probably by General Grant, whose sense of discipline is believed to be unaffected by politics. In no case could Baltimore have been held a fortnight, the "American Army," half a million strong, being Northern to the core, and provided. by the State organization with perfect means of assembling ; but if Mr. Johnson had held the city a day, civil war would have been inevitable, and. had the contest gone on, he must have tried to hold it.

We are not sure it is not inevitable now. It appears from a telegram of the 6th November that the immediate difficulty has been removed, probably by the submission of Mr. Swann —for Reuter would have announced that of the Liberals— but the same dilemma may at any moment recur. The nation willi a revolution which individual States do not approve, and the Constitution is based on the idea that nation and States will in serious matters pull very nearly together, Conse- quently, the revolution to succeed must in reality march over the Constitution, and the problem for the legalists, that is for five-sixths of all Americans, is to keep the breach from being perceived, to invent, in fact, some "war-power," or other constitutional fiction, which will cover the revolutionary but righteous reality. Should this ever become impossible, the Union will, they feel, be adrift towards unknown possibi- lities, and the strongest proof the North has yet given of its fidelity to its great cause is its decision, rather than fail, to risk this drifting. Labour must be free throughout the con- tinent, even if the Constitution, which born Americans believe to be divine, is openly set at naught.