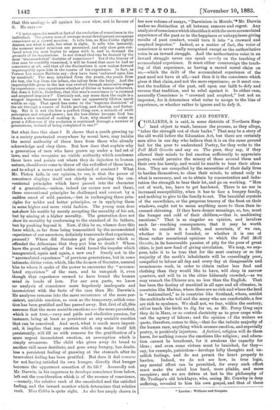 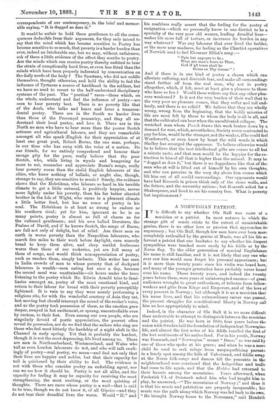 COLLIERS, it is said, in some districts of Northern Eng- land object to wash, because the process, as they allege, " takes the strength out of their backs." That may be a story of the old world before the Education Act, but there are certainly men alive in our day who believe that it is on the same ground bad for the poor to understand Poetry, for they write to the Pall Mall Gazette and say so. The poor, they say, if they allowed their minds to feel emotion sufficiently to appreciate poetry, would perceive the misery of those around them and their own too keenly, and would be unable to bear their situa- tion. They are compelled by the necessities of their daily lives to harden themselves, to close their minds, to attend only to what is necessary, and so to obtain by concentration and indu- ration the strength to bear their lot, and go on working. " Men out of work, too, have to get hardened. There is no use in increased susceptibility, when it has to face a hungry family, and nothing to give to the family to eat. The beautiful crystals of the snowflakes, or the gorgeous tracery of the frost on their windows, ought not to mean anything more to them than in- creased shivering. If they have deeper meanings, so, too, must the hunger and cold of their children,—that is, maddening emotions." That is so singular an opinion, and involves such far - reaching consequences, that it may be worth while to consider it a little, and ascertain, if we can, whether it is well founded, or whether it is one of those rather sensational opinions to which the Pall Mall Gazette, in its honourable passion of pity for the poor of great cities, is just now fond of giving circulation. We may, we sup- pose, take it to be true that for the next century or so the majority of the earth's inhabitants will be exceedingly poor, compelled to labour all day and every day at disagreeable and monotonous work, in order to obtain rather less food and clothing than they would like to have, will sleep in narrow quarters, and will be in the cities hideously crowded,—as we may remark the Chinese are, no less than the English. That has been the destiny of mankind in all ages and all climates, in countries like Madras, where there are no rich and where the land is " nationalised," as in countries like Scotland, where, amidst the multitude who toil and the many who are comfortable, a few are rich to opulence. We shall not, we fear, within the century, either teach the birds to dig for us, as Mr. Percy Greg says they do in Mars, or so control electricity as to grow crops with- out the agency of labour; and the opinion cf the writers we quote, therefore, comes to this,—that for the infinite majority of the human race, anything which arouses emotion, and especially poetry, is positively injurious. A fortiori, religion will do them harm, for nothing rouses the emotions like religion ; and educa- tion cannot be beneficent, for it awakens the capacity for ideas ; and even some virtues must be banished, for they— say, for example, patriotism—develops lofty thoughts and un- selfish feelings, and do not permit the heart properly to harden. Indeed, we do not see how, in true logic, any mental effort can be permitted, for every such effort must make the mind less hard, more pliable, and more receptive ; and we are driven at last to the philosophy of Mr. Trollope's old bricklayer, who, seeing Mr. Crawley in deep suffering, revealed to him his own gospel, and that of these

correspondents of our contemporary, in the brief and memor- able saying, " It is dogged as does it."

It would be unfair to hold these gentlemen to all the conse- quences deducible from their argument, for they only intend to say that the mind which has become sensitive to Poetry has become sensitive to so much, that poverty is a harder burden than ever, indeed an intolerable one, but we may, without unfairness, ask of them a little evidence of the effect they ascribe to poetry. Are the minds which can receive poetry thereby unfitted to bear the strain of exceptionally hard lives, or even less fitted than the minds which have been properly indurated by concentration on the daily needs of the body ? The Spartans, who did not coddle themselves, thought otherwise, and held the ability to feel the influence of Tyrtsens a source of hardihood in the soldiers, but we have no need to revert to the half-understood disciplinary systems of the past. The " poetical " races—those which, on the whole, understand and feel the influence of poetry—are seen to bear poverty best. There is no poverty like that of the Arab, who talks and hears and loves a transcen- dental poetry. There are in the South no harder lives than those of the Provencal peasantry, and they all un- derstand their local poetry, and love it. There are in the North no men who have to bear more than the poorer Scotch artisans and agricultural labours, and they are remarkable amongst all who speak English for their appreciation of at least one great poet, Robert Burns, the one man, perhaps, in our time who has sung with the voice of a nation. Do our friends, for we entirely comprehend and honour their savage pity for the poor, really believe that the poor Scotch, who, while living in wynds and hungering for more to eat, remember and appreciate Burns's songs, really bear poverty worse than the stolid English labourers of the cities, who know nothing of ballads, or aught else, though, strange to say, they are sensitive to music ? Surely, the evidence shows that the Hebridean, who labours so hard in his terrible climate to get a little oatmeal, is positively happier, moves more lightly under his poverty, than his far better situated brother in the Isle of Wight, who earns in a pleasant climate a little better food, but has no sense of poetry in his soul. The Hebridean is at least as strong to endure as his southern rival; yet for him, ignorant as he is on many points, poetry is almost as full of charm as for the cultured gentleman; and his own ballad literature, the Psalms of David, and if he knows Scotch, the songs of Burns, are full not only of delight, but of relief. Are there men on earth in worse poverty than the Neapolitan labourers, who march five miles to their work before daylight, earn scarcely bread to keep them alive, and sleep amidst foulnesses worse than those of our rookeries, yet are full many of them of songs, and would think non-appreciation of poetry, such as reaches them, simply barbaric. This writer has seen in India crowds of men to whose poverty that of dockyard labourers is wealth—men eating but once a day, because the second meal was unattainable—sit hours under the trees listening to the poetry which Mr. Edwin Arnold tries to fami- liarise amongst us, poetry of the most emotional kind, and return to their labour for bread with their poverty perceptibly lightened. It is vain to say they were merely performing a religious rite, for with the wonderful courtesy of Asia they sat, lest moving feet should intercept the sound of the reciter's voice, and as the poetry took possession of them, as the emotion grew deeper, swayed in hot excitement, or sprang, uncontrollable even by custom, to their feet. Even among our own people, who are singularly devoid of poetic appreciation, the poorest often reveal its possession, nor do we find that the sailors who sing are those who feel most bitterly the hardship of a night aloft in the Channel in early spring. Yet that is probably the hardest, though it is not the most depressing, life lived among us. There are men in Northumberland, Westmoreland, and Wales who toil as even London labourers do not, and who will talk exult- ingly of poetry—real poetry, we mean—and find not only that their lives are happier and nobler, but that their capacity for toil is quickened by their ability to feel. The evidence is not with those who consider poetry an enfeebling agent, nor can we see how it should be. Poetry is not all alike, and the capacity for feeling it may be capacity for receiving the most strengthening, the most exciting, or the most quieting of thoughts. There are races whose poetry is a wail—that is said to be true, though we do not know it, of all Gipsies—and they do not bear their dreadful lives the worse. Would " H." and

his confreres really assert that the feeling for the poetry of resignation—which we personally know in one district to be a specialty of the very poor old women, leading dreadful lives— makes life more full of torture, or increases its burden in any way whatever ? Was any labourer that ever lived the feebler, or the more near madness, for feeling as the Chartist operatives of Norwich used to feel Ebenezer Elliot's song :—

" Pain but appears to be;

What are man's fears to Thee, God if rill tears shall bo Gems on Thy throne" ?

And if there is in one kind of poetry a charm which can alleviate suffering, and diminish fear, and make all surroundings stand farther off from the real man, why not in poetry altogether, which, if felt, must at least give a pleasure to those who have so few ? Would these writers say that any other plea- sure weakened Is it not the very burden of their wail that to the very poor no pleasure comes, that they suffer and toil end- lessly, and there is no relief We believe that they are wholly wrong, wrong from the beginning, that the bodily miseries of life are most felt by those to whom the body is all in all, and that the cultivated can bear when the uncultivated collapse. The wretched man whom Punch draws this week beaten down by a demand for rent, which, nevertheless, Society never contracted to pay for him, would be the stronger, not the weaker, if he could feel Wordsworth, or even know by heart the wild words in which Shelley has scourged the oppressor. To believe otherwise would be to believe that the best intellectual gifts are curses to all but a minute caste, and that man would be the happier for the ex- tinction in him of all that is higher than the animal. It may be " dogged as does it," but there is no doggedness like that of the man who at will is lifted out of himself by his own thoughts, and who can perceive in the very sky above him scenes which lift him out of all sordid surroundings. Our opponents would have had Kossuth in prison think only of the stone walls, and the fetters, and the unworthy rations ; but Kossuth asked for a Shakespeare, and lived to see his country free. What is poverty but imprisonment ?