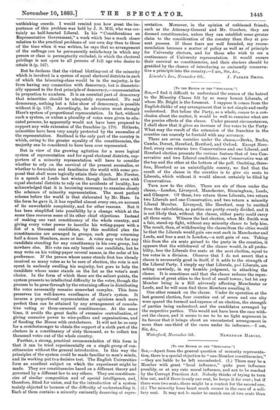 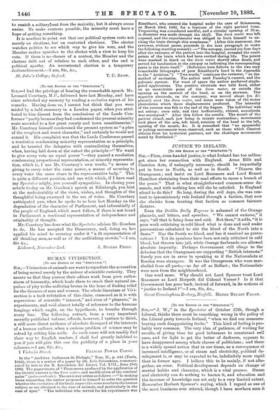 [To THE EDITOR OF THE " SPECTATOR. "] SIR,—Apart from the

general question of minority representa- tion, there is a special objection to "one-Member constituencies," —they are liable to be left uncontested. (1.) There may be a Member with great " local influence," quite pure influence possibly, or at any rate moral influence, and not to be reached by the Corrupt Practices Act. Nobody thinks of trying to turn him out, and if there is only one seat, he keeps it for ever ; but if there were two seats, there might be a contest for the second one. (2.) The minority loses heart much sooner in the case of a soli- tary seat. It may not be easier to snatch one of two seats than to snatch a solitary seat from the majority, but it always seems easier. To make contests possible, the minority must have a • hope of getting something.

It is needless to point out that our political system rests not merely on elections, but on contested elections. The elector watches politics to see which way to give his vote, and the Member makes speeches to the elector with a view to keep his vote. If there is no chance of a contest, the Member and the electors drift out of relation to each other, and the end is political apathy. An uncontested election is a temporary disfranchisement.—I am, Sir, Ac.,