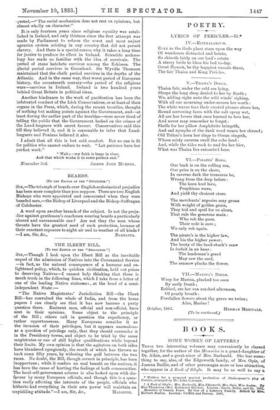 [TO THE EDITOR OF THE "SPECTATOR."] SIB,—Though I look upon the Ilbert Bill as the inevitable -sequel of the admission of Natives into the Covenanted Service —in fact, as the natural consequence of a humane and en- lightened policy, which, to quicken civilisation, held out prizes to deserving Natives—I cannot help thinking that there is much truth in the following lines, which I take from a letter of -one of the leading Native statesmea, at the head of a semi- independent State :—

" The Native Magistrates' Jurisdiction Bill—the Ilbert Bill—has convulsed the whole of India, and from the home papers I can clearly see that it has now become a party -question there. Eminent men, official and non-official, have sent in their opinions. Some object to the principle -of the Bill ; others call in question the expediency, or rather opportuneness. Many Europeans consider it as the invasion of their privileges, but it appears anomalous, as a question of privilege only, that they should surrender it in the Presidency towns, and object to be tried by the same magistrates or one of still higher qualifications while beyond their limits. My own opinion is that the agitators on both sides have blundered egregiously, the result of which has thrown us back some fifty years, by widening the gulf between the two races. No doubt, the Bill, though correct in principle, has been inopportune ; while it confers no real benefit on the natives, it has been the cause of hurting the feelings of both communities. The local-self-government scheme is also looked upon with dis- favour by many European officials, and though this is a ques- tion really affecting the interests of the people, officials who hitherto had everything in their own power will maintain an