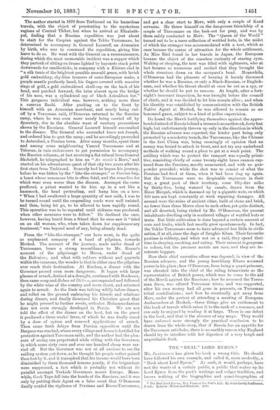 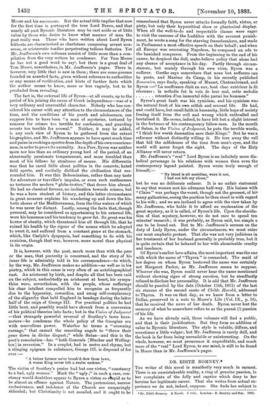 Ma. JEAFFB.ESON has given his book a wrong title. He should have followed his own example, and called it, more modestly, a " Book about Lord Byron." As such, it would, perhaps, have met the wants of a certain public, a public that makes up its Lord Byron from the poet's writings and vulgar tradition, and knows nothing of the biographies and quasi-biographies of • The Real Lord Byron; New Views of the Poet's Life. By John Cordy Jeaffroson. 2 cols. London ; Burst and Blackett. 1F 1.

Moore and his successors. But the actual title implies that now for the first time is portrayed the true Lord Byron, and that nearly all past Byronic literature may be cast aside as of little value by those who desire to know what manner of man the poet really was. Those who have written about Lord Byron hitherto are characterised as charlatans composing arrant non- sense, or aristocratic toadies perpetrating tedious flatteries. Yet Mr. Jeaffreson's own volumes consist of little more than a com- pilation from the very writers he condemns. For Tom Moore he has not a good word to say'; but there is a great deal of Tom Moore, nevertheless, in Mr. Jeaffreson's pages. There is, however, very little that is new in them; there are somegnesses founded on asserted facts, given without reference to authorities or any means of verification, and hints of further facts which the author seems to know, more or less vaguely, but to be precluded from revealing.

The fact is, the external life of Byron—at all events, up to the period of his joining the cause of Greek independence—was of a very ordinary and uneventful character. Nobody who has con- sidered his career with any attention to the circumstances of the time, and the conditions of his youth and adolescence, can suppose him to have been "a man of mysteries, toitured by remorse for crimes too terrible for confession, and guarding secrets too terrible for avowal." Neither, it may be added, is any such view of Byron to be gathered from the extant biographies, and Mr. Jeaffreson appears to have spent much time and pains in evoking a spectre from the depth of his own conscious- ness, in order to prove its unreality. As a Peer, Byron was neither more nor less than an ordinary young lord of the period, of an abnormally passionate temperament, and more troubled than most of his fellows by straitness of means. His differentia was that he cared little about politics in the concrete, hated "field sports, and cordially disliked the civilisation that sur- rounded him. It was this Bohemianism, rather than any taste for adventure or traveller's impulse, or even such restlessness as tortures the modern " globe-trotter," that drove him abroad. He had no classical fervour, no inclination towards science, but he was a keen student of history, and this latter circumstance in great measure explains his wandering up and down the his- toric shores of the Mediterranean, from the blue waters of which he was never far distant. Lastly, among the facts that, though personal, may be considered as appertaining to his external life, were his lameness and his tendency to grow fat. So great was his horror of obesity, which threatened him all through life, that he ruined his health by the rigour of the means which he adopted to avert it, and suffered from a constant gnaw at the stomach, which, like Carlyle's dyspepsia, had something to do with his cynicism, though that was, however, more moral than physical in its origin.

It is, however, with the poet, much more than with the peer or the man, that posterity is concerned, and the story of his inner life is admirably told in his correspondence—to which, by the way, Mr. Jeaffreson makes no addition—as well as in his poetry, which in this sense is very often of an autobiographical East. An aristocrat by birth, and despite all that has been said on the subject, undoubtedly an aristocrat at heart, his sympa-

thies were, nevertheless, with the people, whose sufferings his clear intellect compelled him to recognise as frequently .due to the hypocrisy, cowardice, and smug self-complacency of the oligarchy that held England in bondage during the latter half of the reign of George III. For practical politics he had little bent, and possibly would have shrunk from a conversion .of his political theories into facts ; but in the Vision of Judgment —that strangely powerful reversal of Southey's tame hexa- meters—he condemns the whole policy of the Georgian era with marvellous power. Waterloo he terms a "crowning carnage," that caused the recording angels to "throw their pens down in divine disgust ;" while Satan—and this is the poet's consolation—has "both Generals [Blucher and Welling- ton] in reversion." In a couplet, bad in metre and rhyme, but a stinging epigram in substance, George III. is disposed of for ever :—

The victim of Southey's praise had but one virtue, "constancy to a bad, ugly woman." Mark the " ugly ;" in such4 case, con- stancy would doubtless appear to Byron a virtue so stupid as to be almost an offence against Nature. The pretensions, narrow exclusiveness, and indolence of the Church are unsparingly ridiculed; but Christianity is not assailed, and it ought to be remembered that Byron never attacks formally faith, virtue, or piety, but only their hypocritical show or pharisaical display. When all the well-to-do and respectable classes were eager to visit the excesses of the Luddites with the severest punish- ment, he wrote a song for the starving framebreakers, and made in Parliament a most effective speech on their behalf ; and when all Europe was, execrating Napoleon, he composed an ode to the banished conqueror. From the beginning to the end of his career, he despised the dull, make-believe policy that alone had any chance of acceptance in his day. Partly through circum- stances, but mainly through hie own vices, Byron was a sufferer. Goethe says somewhere that none but sufferers can be poets, and Maxime du Camp, in his recently published Souvenirs, says finely, speaking of Mnsset, Chateaubriand, and Byron :—" La souffrance etait en sus, tout choc exterienr in fit resonner ; la melodie fut la voix de leur mal, cette melodie

Byron's great fault was his cynicism, and his cynicism was the natural fruit of his own selfish and sensual life. He had, and could have, but small faith in humanity, little hope of society freeing itself from the evil and wrong which enthralled and brutalised it. He seems, indeed, to have felt but a slight interest in the fortunes of his contemporary fellow-men. In the mouth of Satan, in the Vision of Judgment, he puts the terrible words, "I think few worth damnation save their Kings." But he was a reformer without distinctly willing it. He tore away the veil that hid the selfishness of the time from men's eyes, and the world will never forget the sight. The days of the Holy Alliance will never return.

Mr. Jeaffreson's " real " Lord Byron is an infinitely more dia- bolical personage in his relations with women than even the contemporary legend painted. Byron wrote truly enough of himself,—

" My blood is all meridian, were it not, I had not left my clime,"

but he was no deliberate seducer. It is no unfair statement to say that women met his advances half-way. His liaison with " Claire " was perhaps the worst, though not the grossest, of his many gallantries, seeing the position he then stood in with regard to his wife ; and we are inclined to agree with the view taken by Mr. Jeaffreson, who holds it to afford an explanation of the great mystery, as it is called, of Byron's life. Upon the elucida- tion of that mystery, however, we do not care to spend ten minutes' research ; it was probably, as Byron said, too simple a one to be found out. But to Mr. Jeaffreson's sermon on the duty of Lady Byron, under the circumstances, we must enter our most emphatic protest. That she was not very judicious in her treatment of her husband generally is probably true, but it is quite certain that he behaved to her with abominable cruelty and insolence.

Of Byron's earlier love-affairs, the most important was the one with which the name of "Thyrza" is connected. The maid of low degree on whom Byron bestowed the name was certainly not Margaret Parker, as Mr. Jeaffreson seems to suppose. Whoever she was, Byron could never hear the name mentioned without showing signs of strong emotion, but he steadfastly refused to disclose her personality. It is odd that Mr. Jeaffreson should be puzzled by the date (October 11th, 1811) of the last six stanzas of the second canto of Childo Harold, addressed to Thyrza. It was on that day, as we know from a letter to Dallas, preserved in a note to Moore's Life (Vol. p. 16), that he received the news of her death. Byron never lost the memory of what he somewhere refers to as the purest (!) passion of his life.

As we have already said, these volumes will find a public, and that is their justification. But they form no addition of value to Byronic literature. The style is voluble, diffuse, and sometimes a little vulgar; but Mr. Jeaffreson is rarely dull, and the book is far from being unreadable or uninteresting. On the whole, however, we must pronounce it unprofitable, and much more of the "real" Lord Byron, to our mind, is still to be found in Moore than in Mr. Jeaffreson's pages.