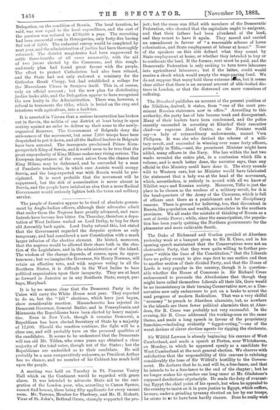 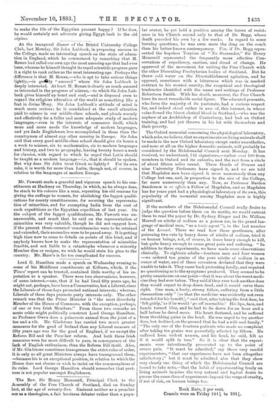 Sir Wilfrid Lawson is already beginning his canvass of West

Cumberland, and made a speech at Parton, near Whitehaven, on Monday, in which he appeared openly as a candidate for West Cumberland at the next general election. We observe with satisfaction that the responsibility of this canvass is subduing considerably the tone of Sir Wilfrid's hostility to the Govern- ment. He declares that he is, and will be, a free-lance, and that he intends to be a free-lance to the end of the chapter ; but he no longer makes his speeches one long sneer at Mr. Gladstone's supposed derelictions of principle. He made the duty of evacuat- ing Egypt the chief point of his speech, but when he appealed to the country to insist on it in pure justice to Egypt, which suffers, he says, under a grinding tyranny rivetted on her by our troops, he seems to is to have been hardly sincere. Does he really wish - to make the life of the Egyptian peasant happy ? If he does, he would certainly not advocate giving Egypt back to the old -regime.