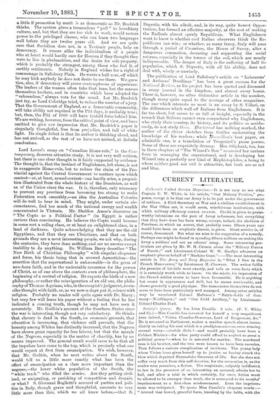 poses, except it be that our Army is to be put under the government

of soldiers. A Civil Secretary at War and a civilian establishment in the War Office are, it would seem, mischievous institutions, with

which military efficiency cannot co-exist. Credit is given to praise- worthy intentions on the part of Army reformers, but everything that they have done has been wrong, except, indeed, the abolition of Purchase, to which an assent, that probably some fifteen years ago

would have been an emphatic dissent, is given. Short service is, of course, denounced. But what we miss is the snggeation of a remedy.

Perhaps one might be found in spending fifteen millions on making tho Army a soldiers' and not an officers' army. Some interesting par- ticulars are given by Mr. IV. II. Cromie about the " Military Forces of Russia ;" and Lieutenant-Colonel W. W. Knollys advances an emphatic plea on behalf of "Machine Gans."—The most interesting

article in The Arms and Navy Magazine is, "What I Saw in the French Manoeuvres," by Lieutenant II. Chawner. Tho writer fulfils the promise of his title most exactly, and tells us some facts which

it is certainly worth while to know. On the whole, his impression of

the French soldier seems to have been favourable. He is anything but smart in appearance and drill, but ho seems serviceable, and shows generally a good physique. The manoeuvres themselves do not seem to have been particularly well managed. Among other articles may be mentioned Colonel Malleson's " Battle-fields of Ger- many—Nordlingen ;" and " Our Field Artillery," by Lieutenant- Colonel Charles Ford.