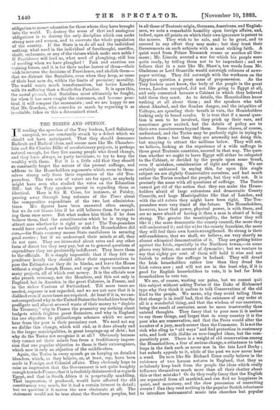 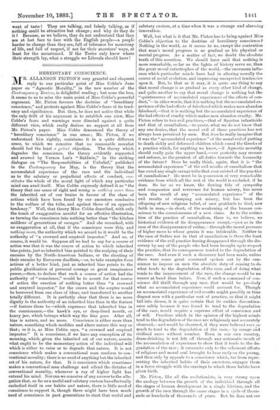 THE TORIES AND OPINION.

IN reading the speeches of the Tory leaders, Lord Salisbury excepted, we are constantly struck by a defect which we

should not have anticipated. That they should denounce Radicals and Radical ideas, and accuse men like Mr. Chamber- lain and Sir Charles Mite of revolutionary projects, is perhaps natural enough, for they live among people who dread change, and they have always, as party tacticians, to try to keep the wealthy with them. But it is a little odd that they should so constantly forget the nature of the present suffrage, and address to the Householders arguments which seem to them- selves strong only from their experience of the old Ten- pounders. The two sets of voters are far apart, as anybody might have seen who studied the votes on the Education Bill ; but the Tory speakers persist in regarding them as

identical. Here is Sir R. Cross, for instance, at Paisley, prosing away through long columns of the Times about the comparative expenditure of the two last administra- tions. His figures have been answered often enough, but we do not blame him if he still believes them for repeat- ing them once more. But what makes him think, if he does believe them, that the constituencies which ho is trying to attract care whether he is right or not ? The Ten-pounders would have cared, and we heartily wish the Householders did care,—for State economy means State carefulness in securing good service ; but if we understand their minds at all, they do not care. They are interested about rates and any other form of direct tax they may pay, but as to general questions of expenditure they are profoundly indifferent. They leave them to the officials. It is simply impossible that if they felt ex- penditure keenly they should allow their representatives to pass the Estimates as they do in blocks, and leave the House without a single Joseph Hume, and urge on their members so many projects, all of which cost money. It is the officials now who preach economy, not the Members, and this not only in England, but in America, in the great Colonies, in France, and in the richer Cantons of Switzerland. Till more taxes are needed, expense is not regarded, and we are not sure that it is disliked even if more taxes are required. At least if it is, we can- not comprehend why in the United States the freeholders bear the profligate and almost avowed waste of their money to " deplete the Treasury," why in France the peasantry say nothing about budgets which frighten great financiers, and why in England the one objection to philanthropic schemes which we never hear from the poor is their pecuniary cost. We need not say we dislike this change, which will end, as it does already end in the larger municipalities, in great heapings-up of debt ; but why do the Tories not recognise it at all ? Obviously because they cannot set their minds free from a traditionary impres- sion that one popular objection to them is their extravagance, which now is only an objection of the middle-class.

Again, the Tories in every speech go on harping on detailed blunders, which, as they believe, or, at least, say, have been made in Foreign and Colonial affairs. They obviously hope to raise an impression that the Government is not quite haughty enough towards France, that it is foolishly disinterested as regards Egypt, and that in South Africa it is perpetually muddling. That impression, if produced, would have affected the old constituency very much, for it had a certain interest in detail; but we question if it moves the new electorate at all. The statement would not be true about the Southern peoples, but

in all those of Teutonic origin, Germans, Americans, and English- men, we note a remarkable humility upon foreign affairs, and, indeed, upon all points on which their own ignorance is patent to the masses. They wish to be safe, and to be great, and to succeed in any effort they may make ; but they trust their Governments on such subjects with a most striking faith. A quiet word from Prince Bismarck rouses or soothes all Ger- mans ; Mr. Lincoln averted a war for which his people were quite ready, by telling them not to be imprudent ; and we believe that in a case like Mr. Shaw's, ten words from Mr. Gladstone or Lord Granville would outweigh columns of news- paper writing. They did outweigh with the workmen on the Egyptian question a great mass of prepossession. As the Tory leaders must know, the body of the people in the great towns, London excepted, did not like going to Egypt at all, and only consented because a Cabinet in which they believed told them they must. As to details, the Householders know nothing at all about them ; and the speakers who talk about Aksabad, and the Soudan danger, and the iniquities of Usibepu, are spending their breath in vain, the Householders looking only to broad results. It is true that if a moral ques- tion is seen to be involved, they prick up their ears, and sometimes grow excited, but the details of policy are to their own consciousness beyond them. Some classes, of course, . understand, and the Tories may be perfectly right in trying to instruct them ; but then they are avowedly not doing this, but essaying to attract the millions below. They will not, we believe, looking at the experience of a wide suffrage in three great Teutonic countries, succeed in that way. The ques- tion whether we ought to leave Egypt will either be relegated to the Cabinet, or decided by the people upon some broad, even if mistaken, consideration of right and wrong. We are certainly unbiassed in saying this, for upon this single subject we are slightly Conservative ourselves, and had much rather the Tories reached the people, but they will not. It is precisely the same with all questions of suffrage. The Tories cannot get rid of the notion that they can make the House- holders afraid of large extensions and democratic County Councils, and huge Municipalities like that of London, and with the old voters they might have been right. The Ten- pounders were very timid of the future. The Householders, however, know that power, physical power, is with them, and are no more afraid of having it than a man is afraid of being strong. The greater the municipality, the better they will like it ; the more democratic the county council, the more they will understand it; and the wider the county franchise, the more they will feel their own hands strengthened. So strong is their self-confidence, that we shall, we believe, see very shortly an almost whimsical demonstration of it. They are getting bitter

We are, of course, wasting our pains, but we cannot quit this subject without asking Tories of the Duke of Richmond type why they think it useless to talk Conservatism of the old kind to the people. We mean, why they avoid telling them that change is in itself bad, that the existence of any order at all is a wonderful thing, and that the wisdom of our ancestors, being the result of centuries, must be more trustworthy than untried thoughts. They fancy that to poor men it is useless to say these things, and forget that in every country it is the poor who are conservative, and that the Peers would alter the number of a jury, much sooner than the Commons. It is not the rich who cling to " old ways " and find protection in customary acts, and look with dislike on new-fangled ideas, but the com- paratively poor. There is a weight of old conservatism among the Householders, a fear of serious change, a reluctance to take leaps in the dark such as never was in the late Lord Derby ; but nobody appeals to it, while of the past we now never hear a word. Do men like Sir Richard Cross really believe in the existence of two human nat area in England, that they so sedulously keep back from the people the ideas which really influence themselves much more than all their chatter about this or that mistake Or do they really fancy that the English are separated from all mankind, and can find no happiness in

quiet, and monotony, and the slow procession of unexciting events ? Can they read nothing in the popular Scotch reluctance to introduce instrumental music into churches but popular

want of taste ? They are talking, and falsely talking, as if nothing could be attractive but change ; and why do they do it ? Because, as we believe, they do not understand that they are at last face to face with the English people—a people harder to change than they are, full of tolerance for monotony of life, and full of respect, if not for their ancestors' ways, at least for the accustomed. If the Tories only knew where their strength lay, what a struggle we Liberals should have !