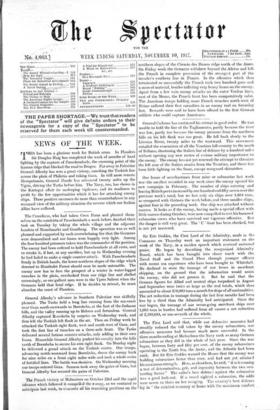 Sir Eric Geddes, the First Lord of the Admiralty, made

in the Commons on Thursday week an important statement on the work of the Navy, in a maiden speech which received universal praise. He began by describing the reorganized Admiralty Board, which has been brought into closer touch with the Naval Staff and the Grand Fleet through younger officers with recent sea experience who have been brought to Whitehall. He declined to state the tonnage of our losses in merchant shipping, on the ground that the information would assist the enemy, who did not possess it. But he said that the German figures for Allied and neutral ships torpedoed in August and September were twice as large as the real totals, which thus amounted to about 350,000 tons a month for ships of all nationalities. The not reduction in tonnage during the last four months had been less by a third than the Admiralty had anticipated. Since the war began, the tonnage of our ocean-going merchant ships over 1,603 tons in burden had suffered from all causes a net reduction of 2,500,000, or one-seventh of the whole.