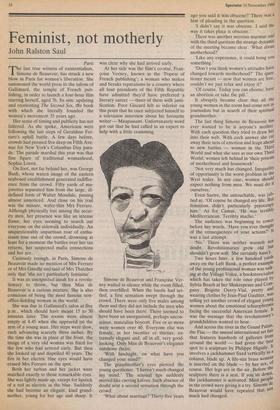 Paris The last true witness of existentialism, Simone de Beauvoir, has struck a new blow in Paris for women's liberation. She summoned the world press to the salons of Gallimard, the temple of French pub- lishing, in order to launch a four-hour film starring herself, aged 76. Its aim: updating and reorienting The Second Sex, the book with which she literally founded the women's movement 35 years ago.

Her sense of timing and publicity has not faltered. As she spoke, Americans were following the last steps of Geraldine Fer- raro's uphill battle. A few days before, crowds had pressed five deep on Fifth Ave- nue for New York's Columbus Day para- de. The parade marshal this year was that fine figure of traditional womanhood, Sophia Loren.

On foot, not far behind her, was George Bush, whose waxen image of the eastern seaboard establishment generated indiffer- ence from the crowd. Fifty yards of ma- jorettes separated him from the large, ill- defined form of Walter Mondale, passing almost unnoticed. And close on his trail was the minute, wafer-thin Mrs Ferraro. Although physically lost among the secur- ity men, her presence was like an intense flame, her eyes seeming to search out everyone on the sidewalk individually. An unquestionably unpartisan roar of enthu- siasm rose out of the crowd, drowning at least for a moment the battles over her tax returns, her suspected mafia connections and her sex.

Curiously enough, in Paris, Simone de Beauvoir made no mention of Mrs Ferraro or of Mrs Gandhi and said of Mrs Thatcher only that 'she isn't particularly feminine'.

It was an unexpected insult for a revolu- tionary to throw, but then Miss de Beauvoir is a curious mixture. She is also conscious of being the most famous non- office-holding woman in the world.

She was due in Gallimard's salon at five p.m., which should have meant 15 to 30 minutes later. The rooms were almost empty at 4.45 when she appeared on the arm of a young man. Her steps were slow, each advancing scarcely three inches. By the time she was in place at the front, the image of a very old woman was fixed for the few who had arrived early. But then she looked up and dispelled 40 years. The fire in her electric blue eyes would have erased Mrs Ferraro on the spot.

Both her turban and her jacket were matched exactly to those remarkable eyes. She was lightly made up, except for lipstick of a red as electric as the blue. Suddenly she had become an elegant, kind grand- mother, young for her age and sharp. It was clear why she had arrived early.

At her side was the film's co-star, Fran- goise Verney, known as the 'Popess of French publishing'; a woman who makes and breaks reputations in a country where all four presidents of the Fifth Republic have admitted they'd have preferred a literary career — three of them with justi- fication. Poor Giscard felt so inferior on this point that he once subjected himself to a television interview about his favourite writer — Maupassant. Unfortunately word got out that he had called in an expert to help with a little cramming.

Simone de Beauvoir and Frangoise Ver- ney waited in silence while the room filled, then overfilled. When the bustle had set- tled, a first sensation swept through the crowd. There were only five males among them and they did not include the men who should have been there. There seemed to have been an unorganised, perhaps uncon- scious, masculine boycott. Five or so more were women over 40. Everyone else was female, in her twenties or thirties, ex- tremely elegant and, all in all, very good- looking. Only Miss de Beauvoir's elegance outshone theirs.

'With hindsight, on what have you changed your mind?'

The grandmother's eyes pierced the young questioner. 'I haven't much changed my mind.' The sensual lips suddenly moved like carving knives. Such absence of doubt sent a second sensation through the crowd.

'What about marriage? Thirty-five years ago you said it was obscene?' There was a hint of pleading in the question. 'I didn't say it was obscene. I said the way it takes place is obscene.' There was another nervous murmur and with the third question the strange dynamic of the meeting became clear. 'What about motherhood?'

'Don't you think women's attitudes have changed towards motherhood?' The ques- tioner meant — now that women are free, couldn't we just relax and enjoy it? 'Of course. Today you can choose; have an abortion or take the pill.' It abruptly became clear that all the young women in the room had come not as journalists but in search of their spiritual grandmother. The last thing Simone de Beauvoir has ever wanted to be is anyone's mother. With each question they tried to draw her into their web. With each answer she cut away their nets of emotion and leapt ahead to new battles — women in the Third World and what she sees as our own Third World; women left behind in 'their prisons of motherhood and housework'.

'Not very much has changed. Inequality of opportunity is the worst problem in the West today. In any case, women should expect nothing from men. We must do it ourselves.'

Even Sartre, the untouchable, was jab' bed at. 'Of course he changed my life. Btit feminism didn't particularly preoceuPY him.' As for Camus, 'He was terriblY Mediterranean. Terribly macho.' The audience was beginning to cower before her words. 'Have you ever thought of the consequences of your actions?' It was a last attempt. 'No.' There was neither warmth rwr doubt. Revolutionaries grow old but shouldn't grow soft. She certainly hasn't. Two hours later, a few hundred yards away on the Left Bank, a perfect example of the young professional woman was talk- ing at the Village Voice, a bookstore/salon which has taken the role once played hY Sylvia Beach at her Shakespeare and Com- pany. Brigitte Ouvry-Vial, pretty and wearing clothes by Jean-Paul Gaultier, was telling yet another crowd of elegant young women about the emotional schizophrenia facing the successful American female. It was the message that the revolutionarY's grandchildren wanted to hear. And across the river in the Grand Patais, the Fiac — the annual international art fair that features hundreds of galleries frodi around the world — had given the best spot to a sculpture by Philippe Higuily. It involves a jackhammer fixed vertically as a column, blade up. A life-size brass woman., is inserted on the blade — by her sex, 01 course. Her legs are in the air. Before the sculpture there is a seat. If you sit down, the jackhammer is activated. Most people in the crowd were giving it a try. Simone de Beauvoir would have repeated that not much had changed.