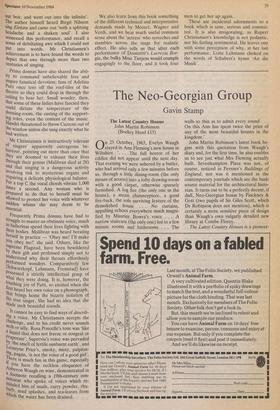 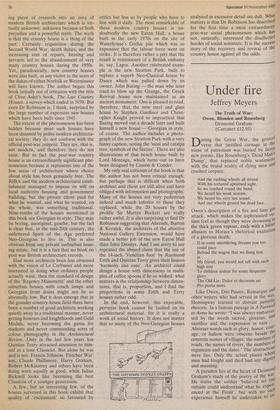 The Latest Country Houses John Martin Robinson (Bodley Head £15) On 25 October, 1963, Evelyn Waugh stayed in Ann Fleming's new house in Wiltshire. . The full horror of her edifice did not appear until the next day. That evening we were ushered by a butler, who had arrived only a few minutes before us, through a little dining-room (the only means of access) into a lofty drawing-room with a good carpet, otherwise sparsely furnished. A log fire (the only one in the house), a mean chimneypiece, a good fire-back, the sole surviving feature of the demolished house . . . No curtains, appalling echoes everywhere much magni- fied by Maurice Bowra's voice . . . A narrow staircase (the only one) led to a few minute rooms and bathrooms . . . The walls so thin as to admit every sound . . . On this Ann has spent twice the price of any of the most beautiful houses in the kingdom.'

John Martin Robinson's latest book be- gins with this quotation from Waugh's diary and, for the first time, he also enables us to see just what Mrs Fleming actually built. Sevenhampton Place was not, of course, noticed in Pevsner's Buildings of England; nor was it mentioned in the contemporary journals which are the basic source material for the architectural histo- rian. It turns out to be a perfectly decent, if dull, Neo-Georgian house by Pinckney & Gott (two pupils of Sir Giles Scott, which Dr Robinson does not mention), which is certainly a more sensitive piece of design than Waugh's own vulgarly detailed new library at Combe Florey.

The Latest Country Houses is a pioneer- ing piece of research into an area of modern British architecture which is vir- tually unknown: unknown because of both prejudice and a powerful myth. The myth is that the country house is a thing of the past. Certainly requisition during the Second World War, death duties, and the increasing cost of repairs, heating and servants led to the abandonment of very many country houses during the 1950s. Yet, paradoxically, new country houses were also built, as any visitor to the seats of the dukes of either Norfolk or Westminster will have known. The author began this book initially out of irritation with the title of Clive Aslet's book, The Last Country Houses, a survey which ended in 1939. But even Dr Robinson is, I think, surprised by the large number of expensive new houses which have been built since 1945.

The extent of the phenomenon has been hidden because most such houses have been shunned by polite modern architectu- ral society: they do not conform with the official post-war zeitgeist. They are, that is, not modern, and therefore they do not exist. But in fact the post-war country house is an extraordinarily significant phe- nomenon because it represents one of the few areas of architecture where choice about style has been genuinely free. The RIBA and the modern architectural estab- lishment managed to impose its will on local authority housing and government building, but the private client paid for what he wanted, and what he wanted, on the whole, was something traditional. Nine-tenths of the houses mentioned in this book are Georgian in style. They may be boring, unoriginal, gauche, but the fact is clear that, in the mid-20th century, the unfettered Spirit of the Age preferred Neo-Georgian to live in. This is also obvious from any private surburban hous- ing estate, but it is a fact that no book on • post-war British architecture records.

Had more architects been less obsessed with the vision of Le Corbusier and more interested in doing what ordinary people actually want, then the standard of design of the 'Regency Maisonette' and the other suburban houses with coach lamps and Georgian front doors might not be so abysmally low. But it does emerge that in the grander country-house field there have been a number of good architects working quietly away in a traditional manner, never getting honours and knighthoods and Gold Medals, never becoming the gurus for students and never commanding acres of colour photography in the Architectural Review. Only in the last few years has Quinlan Terry attracted attention to him- self as a lone Classicist. But alone he was and is not. Francis Johnson, Fletcher Wat- son, Claude Phillimore, Harry Graham, Robert McKinstrey and others have been doing work equally as good, while Julian Bicknell looks like becoming the best Classicist of a younger generation.

A few, but an interesting few, of the houses surveyed in this book exhibit that quality of 'excitement' so favoured by critics but less so by people who have to live with it daily. The most remarkable of these modern country houses is un- doubtedly the new Eaton Hall, a house built in the early 1970s on the site of Waterhouse's Gothic pile which was so expensive that the labour force went on strike. It is therefore rather a pity that the result is reminiscent of a British embassy in, say, Lagos. Another celebrated exam- ple is the new Stratton Park, built to replace a superb Neo-Classical house by Dance which was pulled down by its owner, John Baring — the man who later tried to blow up the Grange, the Greek Revival house now maintained as an ancient monument. One is pleased to read, therefore, that. the new steel and glass house by Stephen Gardiner and Christ- opher Knight proved so impractical that Baring moved out a decade later and built himself a new house — Georgian in style, of course. The author includes a photo- graph of the new Stratton Park with a very funny caption, noting the 'mini and catalpa tree, symbols of the Sixties'. There are also illustrations of that beach house built by Lord Montagu, which turns out to have been designed by Casson & Conder.

My only real criticism of the book is that the author has not been critical enough, but perhaps that is difficult when both architect and client are still alive and have obliged with information and photographs. Many of the houses are very pedestrian indeed and much inferior to those they replaced, while the 20 houses by the prolific Sir Martyn Beckett are really rather awful. It is also surprising to find Dr Robinson suggesting that Ahrends, Burton & Koralek, the architects of the abortive National Gallery Extension, would have made a better job of the new Eaton Hall than John Dennys. And I am sorry to see repeated the absurd claim that the use of the 14-inch 'Venetian foot' by Raymond Erith and Quinlan Terry gives their houses 'harmony and ease'. An architect could design a house with dimensions in multi- ples of coffee spoons if he so wished: what matters is the relationship between dimen- sions, that is, proportion, and I find the proportions in some Erith and Terry houses rather odd.

In the end, however, this enjoyable, perverse book cannot be faulted on its architectural material, for it is really a work of social history. It does not matter that so many of the Neo-Georgian houses analysed in excessive detail are dull. What matters is that Dr Robinson has described for the first time a most extraordinary post-war social phenomenon which has not, naturally, interested the disaffected hordes of social scientists. It is the success story of the recovery and revival of the country house against all the odds.