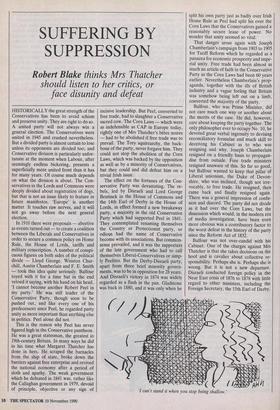 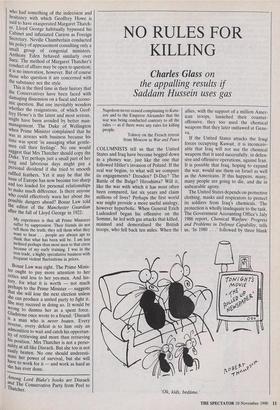 should listen to her critics, or face disunity and defeat

HISTORICALLY the great strength of the Conservatives has been to avoid schism and preserve unity. They are right to do so. A united party will not always win a general election. The Conservatives were united in 1945 and crashed nevertheless. But a divided party is almost certain to lose unless its opponents are divided too; and Conservative division is particularly unfor- tunate at the moment when Labour, after seemingly endless bickering, presents a superficially more united front than it has for many years. Of course much depends on what the division is about. The Con- servatives in the Lords and Commons were deeply divided about registration of dogs, but that is not an issue likely to feature in future manifestos. 'Europe' is another matter. It touches raw nerves, and it will not go away before the next general election.

In 1910 there were proposals — abortive as events turned out — to create a coalition between the Liberals and Conservatives in order to secure a common policy on Home Rule, the House of Lords, tariffs and military conscription. A number of conspi- cuous figures on both sides of the political divide — Lloyd George, Winston Chur- chill, Austin Chamberlain and F. E. Smith — took this idea quite seriously. Balfour toyed with it for a time but in the end vetoed it saying, with his hand on his head, 'I cannot become another Robert Peel in my party.' He was still leader of the Conservative Party, though soon to be pushed out, and like every one of his predecessors since Peel, he regarded party unity as more important than anything else in politics. Peel alone did not.

This is the reason why Peel has never figured high in the Conservative pantheon. He was a great statesman, the greatest in 19th-century Britain. In many ways he did in his time what Margaret Thatcher has done in hers. He scraped the barnacles from the ship of state, broke down the barriers against free enterprise and revived the national economy after a period of sloth and apathy. The weak government which he defeated in 1841 was, rather like the Callaghan government in 1979, devoid of principle, objective or any sign of incisive leadership. But Peel, converted to free trade, had to slaughter a Conservative sacred cow. The Corn Laws — which were as indefensible as CAP in Europe today, rightly one of Mrs Thatcher's bates noires — had to be abolished if free trade was to prevail. The Tory squirearchy, the back- bone of the party, never forgave him. They could not stop the abolition of the Corn Laws, which was backed by the opposition as well as by a minority of Conservatives, but they could and did defeat him on a trivial Irish issue.

The effect on the fortunes of the Con- servative Party was devastating. The re- bels, led by Disraeli and Lord George Bentinck in the House of Commons and the 14th Earl of Derby in the House of Lords, in effect formed a new breakaway party, a majority in the old Conservative Party which had supported Peel in 1841. They contemplated renaming themselves the Country or Protectionist party, so odious had the name of Conservative become with its associations. But common- sense prevailed, and it was the supporters of the late government who had to call themselves Liberal-Conservatives or simp- ly Peelites. But the Derby-Disraeli party, apart from three brief minority govern- ments, was to be in opposition for 28 years. And Disraeli's victory in 1874 was widely regarded as a flash in the pan. Gladstone was back in 1880, and it was only when he split his own party just as badly over Irish Home Rule as Peel had split his over the Corn Laws that the Conservatives gained a reasonably secure lease of power. No wonder that unity seemed so vital.

That danger arose again with Joseph Chamberlain's campaign from 1903 to 1905 for Tariff Reform which he regarded as a panacea for economic prosperity and impe- rial unity. Free trade had been almost as much an article of faith in the Conservative Party as the Corn Laws had been 60 years earlier. Nevertheless Chamberlain's prop- aganda, together with the ills of British industry and a vague feeling that Britain was somehow being left out on a limb, converted the majority of the party.

Balfour, who was Prime Minister, did not care much one way or another about the merits of the case. He did, however, care about keeping the party together. The only philosopher ever to occupy No. 10, he devoted great verbal ingenuity to devising reconciliatory formulae and much skill to deceiving his Cabinet as to who was resigning and why. Joseph Chamberlain resigned on a friendly basis to propagan- dise from outside. Free trade ministers resigned unaware of this. So far so good, but Balfour wanted to keep that pillar of Liberal unionism, the Duke of Devon- shire, who was inclined, though not irre- vocably, to free trade. He resigned, then came back and finally resigned again. There was a general impression of confu- sion and discord. The party did not divide as it had over the Corn Laws, but the dissension which would, in the modern era of media investigation, have been even more obvious was a contributory factor to the worst defeat in the history of the party since the Reform Act of 1832.

Balfour was not over-candid with his Cabinet. One of the charges against Mrs Thatcher is that she takes decisions on the hoof and is cavalier about collective re- sponsibility. Perhaps she is. Perhaps she is wrong. But it is not a new departure. Disraeli conducted foreign policy in the Near East crisis of 1876 to 1878 with little regard to other ministers, including the Foreign Secretary, the 15th Earl of Derby, 'I can't stand it when you stop being shallow.' who had something of the indecision and hesitancy with which Geoffrey Howe is said to have exasperated Margaret Thatch- er. Lloyd George habitually bypassed his Cabinet and infuriated Curzon as Foreign Secretary. Neville Chamberlain conducted his policy of appeasement consulting only a small group of congenial ministers. Anthony Eden behaved similarly over Suez. The method of Margaret Thatcher's conduct of affairs may be open to question; it is no innovation, however. But of course those who question it are concerned with the substance not the style. This is the third time in their history that the Conservatives have been faced with damaging dissension on a fiscal and econo- mic question. But one inevitably wonders whether the resignations, of which Geof- frey Howe's is the latest and most serious, aught have been avoided by better man- management. The Duke of Wellington when Prime Minister complained that he Was in arrears with business because his time was spent 'in assuaging what gentle- men call their feelings'. No one would suggest that Mrs Thatcher should copy the Duke. Yet perhaps just a small part of her long and laborious days might pay a Personal dividend if she tried to smooth ruffled feathers. Yet it may be that the issue of Europe has now become too sharp and too loaded for personal relationships to make much difference. Is there anyone who could effectively warn her about the possible dangers ahead? Bonar Law told the editor of the Manchester Guardian after the fall of Lloyd George in 1922:

My experience is that all Prime Ministers suffer by suppression. Their friends do not tell them the truth; they tell them what they want to hear . . . people are always apt to think that what has been will be. I am less inclined perhaps than most men to that error because of my early training. I was in the iron trade, a highly speculative business with frequent violent fluctuations in prices.

Bonar Law was right. The Prime Minis- terought to pay more attention to her critics and less to her yes-men. And his- tory, for what it is worth — not much perhaps to the Prime Minister — suggests that she will lose the next election unless she can produce a united party to fight it. She may succeed in doing so. It would be wrong to dismiss her as a spent force. Gladstone once wrote to a friend: 'Disraeli is a man who is never beaten. Every reverse, every defeat is to him only an admonition to wait and catch his opportun- ity of retrieving and more than retrieving his position.' Mrs Thatcher is not a perso- nality at all like Disraeli. But she too is not easily beaten. No one should underesti- mate her power of survival, but she will have to work for it — and work as hard as she has ever done.

Among Lord Blake's books are Disraeli and The Conservative Party from Peel to Thatcher.