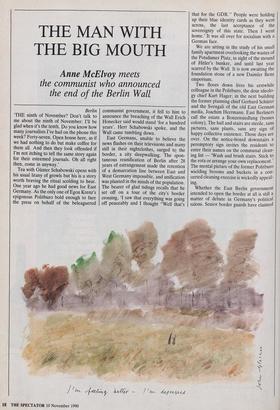 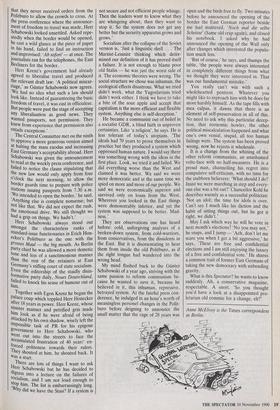 THE MAN WITH THE BIG MOUTH

the communist who announced the end of the Berlin Wall

Berlin `THE ninth of November? Don't talk to me about the ninth of November: I'll be glad when it's the tenth. Do you know how many journalists I've had on the phone this week? Forty-seven. Open house here, as if we had nothing to do but make coffee for them all. And then they look offended if I'm not itching to tell the same story again for their esteemed journals. Oh all right then, come in anyway.'

Tea with Giinter Schabowski opens with his usual litany of growls but his is a story worth braving the ritual scolding to hear. One year ago he had good news for East Germany. As the only one of Egon Krenz's epigonous Politburo bold enough to face the press on behalf of the beleaguered communist government, it fell to him to announce the breaching of the Wall Erich Honecker said would stand 'for a hundred years'. Herr Schabowski spoke, and the Wall came tumbling down.

East Germans, unable to believe the news flashes on their televisions and many still in their nightclothes, surged to the border, a city sleepwalking. The spon- taneous reunification of Berlin after 28 years of estrangement made the retention of a demarcation line between East and West Germany impossible, and unification was planted in the minds of the population. The bearer of glad tidings recalls that he set off on a tour of the city's border crossing, 'I saw that everything was going off peaceably and I thought "Well that's that for the GDR." People were holding up their blue identity cards as they went across, the last acceptance of the sovereignty of this state. Then I went home.' It was all over for socialism with a German face.

We are sitting in the study of his small family apartment overlooking the wastes of the Potsdamer Platz, in sight of the mound of Hitler's bunker, and until last year scarred by the Wall. It is now awaiting the foundation stone of a new Daimler Benz emporium.

Two floors down lives his erstwhile colleague in the Politburo, the dour ideolo- gy chief Kurt Hager; in the next building the former planning chief Gerhard Schtirer and the Svengali of the old East German media, Joachim Herrmann. East Berliners call the estate a Bonzensiedlung (bosses colony), The hall and stairs are sterile, sans pictures, sans plants, sans any sign of happy collective existence. Those days are over. On the notice-board downstairs a peremptory sign invites the residents to enter their names on the communal clean- ing list — 'Wash and brush stairs. Stick to the rota or arrange your own replacement.' The mental picture of the former Politburo wielding brooms and buckets in a con- certed cleaning exercise is wickedly appeal- ing.

Whether the East Berlin government intended to open the border at all is still a matter of debate in Germany's political salons. Senior border guards have claimed

that they never received orders from the Politburo to allow the crowds to cross. At the press conference where the announce- ment of freedom to travel was made, Herr Schabowski looked unsettled. Asked repe- atedly when the border would be opened, he cast a wild glance at the piece of paper in his hand, failed to find an instruction and improvised: 'Ab sofort' — at once. The journalists ran for the telephones, the East Berliners for the border.

Herr Krenz's government had already agreed to liberalise travel and produced the relevant draft law: 'A political miscar- riage,' as Gunter Schabowski now agrees. `We had no idea what such a law should look like. Instead of guaranteeing the basic freedom of travel, it was cast in officialese. But people were past the stage of accepting any liberalisation as good news. They wanted passports, not permission. They knew from experience that permission also entails exceptions.'

The Central Committee met on the ninth to approve a more generous version aimed at halting the mass exodus and increasing East Germany's acceptability abroad. Herr Schabowski was given the announcement to read at the weekly press conference, and failed to notice the clause stipulating that the new law would only apply from four 0 clock the next morning, to allow the border guards time to prepare with police stations issuing passports from 7.30 a.m. :We intended to open the border,' he said, Anything else is complete nonsense; but not like that. We did not expect the rush, the emotional drive. We still thought we had a grip on things. We hadn't.'

Herr Schabowski always stood out amongst the characterless ranks of standard-issue functionaries in Erich Hon- ecker's Politburo as the one with the grosses Maul — the big mouth. As Berlin party chief he was allowed a more demotic tone and less of a sanctimonious manner than the rest of the retainers at East Germany's stifling court of state socialism. Even the editorship of the staidly disin- formative party daily, Neues Deutschland, failed to knock his sense of humour out of him.

Together with Egon Krenz he began the palace coup which toppled Herr Honecker after 18 years in power. Herr Krenz, whose sinister manner and petrified grin made him look as if he were afraid of being attacked by his own shadow, wisely left the Impossible task of PR for his epigone government to Herr Schabowski, who Went out into the streets to face the accumulated frustration of 40 years' en- forced politeness towards their rulers. They shouted at him, he shouted back. It was a start.

There are lots of things I want to ask Herr Schabowski but he has decided to digress into a lecture on the failures of socialism, and I am not loud enough to !top him. The list is embarrassingly long. Why did we have the Stasi? If a system is not secure and not efficient people whinge. Then the leaders want to know what they are whingeing about, then they want to stop it. So the system does not get any better but the security apparatus grows and grows.'

Socialism after the collapse of the Soviet version is, 'Just a linguistic shell . . . The Marxist-Leninist thinking which deter- mined our definition of it has proved itself a failure. It is not enough to blame poor old Stalin — he was just the worst side of it. The economic theories were wrong. The social structure we chose was inhuman, the ecological effects disastrous. What we tried didn't work, what the Yugoslavians tried didn't work either. I think we have to take a bite of the sour apple and accept that capitalism is the more efficient and flexible system. Anything else is self-deception.'

He became a communist out of belief in a socialist GDR, a blind faith in unproven certainties. Like 'a religion', he says. He is less tolerant of today's utopians. 'The ideals had 70 years to prove themselves in practice but they produced a system which oppressed human nature. I would say there was something wrong with the ideas in the first place. Look, we tried it and failed. We did everything worse than the West and claimed it was better. We said we were more democratic and at the same time we spied on more and more of our people. We said we were economically superior and survived only on loans from the West. Wherever you looked in the East things were demonstrably inferior, and yet the system was supposed to be better. Mad- ness.'

They are observations one has heard before: cold, unforgiving analyses of a broken-down system, from cold-warriors, from conservatives, from the dissidents in the East. But it is disorientating to hear them from inside the old Politburo, as if the right tongue had wandered into the wrong head.

My mind flashed back to the Gunter Schabowski of a year ago, striving with the same passion to reform communism be- cause he wanted to save it, because he believed in it, this inhuman, repressive, betrayed system. At the fateful press con- derence, he indulged in an hour's worth of meaningless personel changes in the Polit- buro before deigning to announce the small matter that the cage of 28 years was

`But of course,' he says, and thumps the table, 'the people were always interested in completely different things from what we thought they were interested in. That was our fundamental mistake.'

You really can't win with such a wholehearted penitent. Whatever you might like to reproach him with he does far more harshly himself. As the tape fills with mea culpas, it dawns that there is an element of self-preservation in all of this. No need to ask why this particular decep- tion, that economic howler, the other political miscalculation happened and what one's own venial, stupid, all too human failings were. The system has been proved wrong, now he rejects it wholesale.

It is a change from the whining of the other reform communists, an unashamed volte-face with no half-measures. He is a proud man, channelling his regret into compulsive self-criticism, with no time for the stubborn believers: 'What should I do? Insist we were marching in step and every- one else was a bit out?' Chancellor Kohl he describes warmly as a successful politician: `Not an idol; the time for idols is over. Can't say I much like his diction and the habit of sitting things out, but he got it right, we didn't.'

May I ask which way he will he vote in next month's elections? 'No you may not,' he snaps, and I jump — 'Ach, don't let me scare you when I get a bit aggressive,' he says, 'These are free and confidential elections and I am still enjoying the luxury of a free and confidential vote.' He shares a common trait of former East Germans of taking the new democracy with unbending gravity.

What is this Spectator? he wants to know suddenly. Ah, a conservative magazine, respectable. A snort. `So you thought you'd have a look at a disappointed pro- letarian old commie for a change, eh?'

Anne McElvoy is the Times correspondent in Berlin.