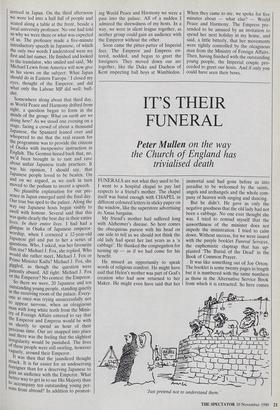 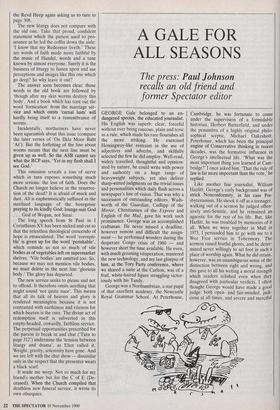 FUNERALS are not what they used to be. I went to a hospital chapel to pay last respects to a friend's mother. The chapel itself was banal enough with CHAPEL in different coloured letters in sticky paper on the window, like the superstore advertising its Xmas bargains.

My friend's mother had suffered long with Alzheimer's disease. So here comes the obsequious parson with his head on one side to tell us we should not think the old lady had spent her last years as a 'a cabbage'. He thanked the congregation for turning up — as if we had come for his benefit.

He missed an opportunity to speak words of religious comfort. He might have said that Helen's mother was part of God's creation who had now returned to her Maker. He might even have said that her immortal soul had gone before us into paradise to be welcomed by the saints, angels and archangels and the whole com- pany of heaven with singing and dancing.

But he didn't. He gave us only the negative goodness that the old lady had not been a cabbage. No one ever thought she was. I tried to remind myself that the unworthiness of the minister does not impede the ministration. I tried to calm down. Without success, for we were issued with the purple booklet Funeral Services, the euphemistic claptrap that has up- planted 'The Burial of the Dead' in the Book of Common Prayer.

It was like something out of Joe Orton. The booklet is some twenty pages in length but it is numbered with the same numbers as those in the Alternative Service Book from which it is extracted. So here comes 'Just pretend not to understand them.' the Revd Heep again asking us to turn to page 308.

The new liturgy does not compare with the old one. Take that proud, confident statement which the parson used to pro- nounce as he led the coffin down the aisle: `I know that my Redeemer liveth.' These are words of faith made more faithful by the music of Handel, words and a tune known by almost everyone. Surely it is the business of liturgy to fasten upon and use perceptions and images like this one which go deep? So why leave it out?

The answer soon becomes clear: those words in the old book are followed by `though after my skin worms destroy this body'. And a book which has torn out the word 'fornication' from the marriage ser- vice and which omits 'carnal lusts' will hardly bring itself to a remembrance of worms.

Incidentally, northerners have never been squeamish about this issue (compare the later verses of 'On Ilkla Moor Baht `At). But the forfeiting of the line about worms means that the next line must be given up as well. So the ASB cannot say what the RCP says, 'Yet in my flesh shall I see God.'

This omission reveals a loss of nerve which in turn exposes something much more serious: the loss of faith. Does the Church no longer believe in the resurrec- tion of the dead? It is afraid of muck and dust. All is euphemistically suffused in the sterilised language of the bourgoisie praying to its kindly God: lounge-suit God . . . God of Wogan, not Sinai.

The long speech from St Paul in I Corinthians XV has been nicked and cut so that the relentless theological crescendo of hope is emasculated. The word 'corrupti- ble' is given up for the word 'perishable', which reminds us not so much of vile bodies as of vegetables left on supermarket shelves, 'Vile bodies' are omitted too. So, because we may not mention vile bodies, we must delete in the next line 'glorious body.' The glory has departed.

The new service seeks to please and not to offend. It therefore omits anything that might sound 'not quate nace'. This means that all its talk of heaven and glory is rendered meaningless because it is not contrasted with earthiness and vileness for which heaven is the cure. The divine act of redemption itself is subverted in this empty-headed, cowardly, faithless service.

The perpetual opportunities prescribed for the parson to break in and chat (`Turn to page 312') undermine the 'tension between liturgy and drama', as Eliot called it. Weight, gravity, solemnity have gone. And we are left with the chat show — dissimilar only in the respect that the presenter wears a black scarf.

It made me weep. Not so much for my friend's mother but for the C of E (De- ceased). When the Church compiled that deathless new funeral service, it wrote its own obsequies.