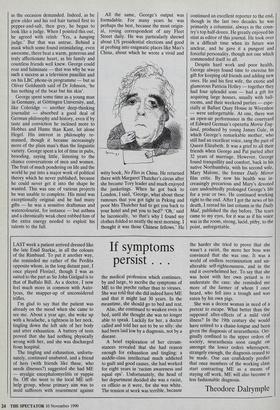 LAST week a patient arrived dressed like the late Enid Starkie, in all the colours of the Rimbaud. To put it another way, she reminded me rather of the Perdita opposite whom, in the long distant past, I once played Florizel, though I was as suited to the part as Sir John Gielgud is to that of Buffalo Bill. As a doctor, I now feel much more in common with Auto- lycus, the snapper-up of unconsidered trifles.

I'm glad to say that the patient was already on the mend when she came to see me. About a year ago, she woke up with a headache, a tightness in her neck, tingling down the left side of her body and utter exhaustion. A battery of tests proved that she had nothing physically wrong with her, and she was discharged from hospital.

The tingling and exhaustion, unfortu- nately, continued unabated, and a friend of hers (with friends like these, who needs illnesses?) suggested she had ME — myalgic encephalomyelitis or yuppie flu. Off she went to the local ME self- help group, whose primary aim was to instil sufferers with resentment against the medical profession which continues, by and large, to ascribe the symptoms of ME to the psyche rather than to viruses. She was told that she did indeed have ME and that it might last 30 years. In the meantime, she should go to bed and rest.

Alas, she continued to weaken even in bed, until she thought she was no longer able to speak. Luckily for her, a doctor called and told her not to be so silly: she had been laid low by a diagnosis, not by a disease.

A brief exploration of her circum- stances revealed that she had reason enough for exhaustion and tingling: a middle-class intellectual much addicted to guilt and good causes, she had worked for eight years in 'racism awareness and equal ops'. Unfortunately, the head of her department decided she was a racist, ex officio as it were, for she was white. The tension at work was terrible, because the harder she tried to prove that she wasn't a racist, the more her boss was convinced that she was one. It was a world of endless recrimination and un- alterable self-righteousness, and in the end it overwhelmed her. To say that she was hoist with her own petard is to understate the case: she reminded me more of the farmer of whom I once heard, who fell into a trough and was eaten by his own pigs.

She was a decent woman in need of a pretext to escape. What better than the supposed after-effects of a mild viral illness? In the 19th century she would have retired to a chaise-longue and been given the diagnosis of neurasthenia. Ori- ginally confined to the upper orders of society, neurasthenia soon caught on amongst the lower orders whereupon, strangely enough, the diagnosis ceased to be made. One can confidently predict that once members of the working class start contracting ME as a means of staying off work, ME will also become a less fashionable diagnosis.