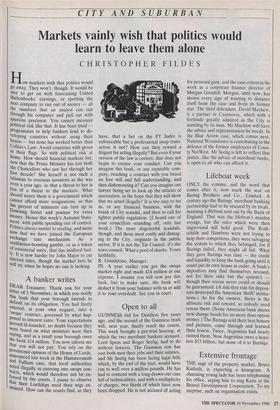 Markets vainly wish that politics would learn to leave them alone

How markets wish that politics would go away. They won't, though. It would be nice to get on with forecasting United Buttonhooks' earnings, or spotting the next company to run out of money — all the numbers that an analyst can run through his computer and pull out with spurious precision. You cannot measure political risk like that. It has been tried programmes to help bankers lend to de- veloping countries without using their brains — but none has worked better than Collins's Law: Avoid countries with green in their flags. So with political risk at home. How should financial markets bet, now that the Prime Minister has lost both the Chancellors who saw her through her first decade? She herself is not such a talisman to overseas investors as she was even a year ago, so that a threat to her is less of a threat to the markets. What should worry them is a government which cannot afford more resignations, so that the greyest of ministers can turn up in Downing Street and posture for extra money. Hence this week's Autumn State- ment, with public spending out of control. Politics always matter to sterling, and more now that we have joined the European exchange rate mechanism. As a confidence-boosting gambit, or as a token of ministerial unity, that has misfired bad- ly. It is now harder for John Major to cut interest rates, though the market bets he will try when he hopes no one is looking.