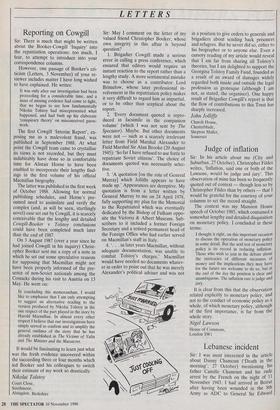 Sir: In his article about me (City and Suburban, 27 October), Christopher Fildes writes, 'Inflation, said one or both of the Lawsons, would be judge and jury'. This observation of mine has been so frequently quoted out of context — though less so by Christopher Fildes than by others — that I would be grateful for the courtesy of your columns to set the record-straight. The context was my Mansion House speech of October 1985, which contained a somewhat lengthy and detailed disquisition on monetary policy. I concluded in these terms:

I thought it right, on this important occasion to discuss the operation of monetary policy in some detail. But the acid test of monetary policy is its record in reducing inflation. Those who wish to join in the debate about the intricacies of different measures of money and the implications they may have for the future are welcome to do so, but at the end of the day the position is clear and unambiguous. The inflation rate is judge and jury.