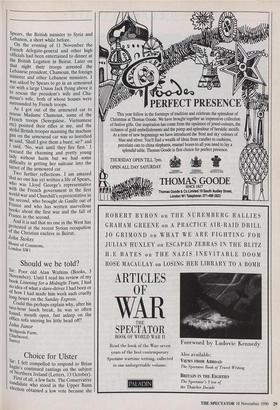 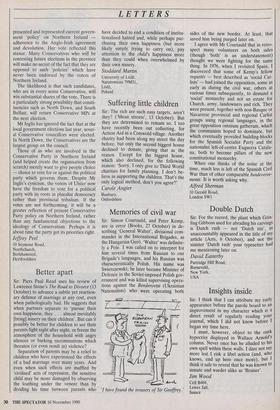 Sir: I felt compelled to respond to Brian Inglis's continued rantings on the subject of Northern Ireland (Letters, 13 October).

First of all, a few facts. The Conservative candidate who stood in the Upper Bann election obtained a low vote because she

presented and represented current govern- ment `policy' on Northern Ireland adherence to the Anglo-Irish agreement and devolution. Her vote reflected this stance. Many Conservatives who will be contesting future elections in the province will make no secret of the fact that they are opposed to such `policies' which have never been endorsed by the voters of Northern Ireland.

The likelihood is that such candidates, who are in every sense Conservative, will win substantial shares of the vote. There is a particularly strong possibility that consti- tuencies such as North Down, and South Belfast, will return Conservative MPs at the next election.

Mr Inglis has ignored the fact that at the local government elections last year, sever- al Conservative councillors were elected. In North Down, the Conservatives are the largest group on the council.

Those of us who are involved in the Conservative Party in Northern Ireland (and helped create the organisation from scratch) merely want to give people choice — choice to vote for or against the political party which governs them. Despite Mr Inglis's cynicism, the voters of Ulster now have the freedom to vote for a political party with its roots in pluralist democracy rather than provincial tribalism. If the votes are not forthcoming, it will be a greater reflection of present Conservative Party policy on Northern Ireland, rather than any fundamental objections to the ideology of Conservatism. Perhaps it is about time the party got its priorities right. Jeffrey Peel