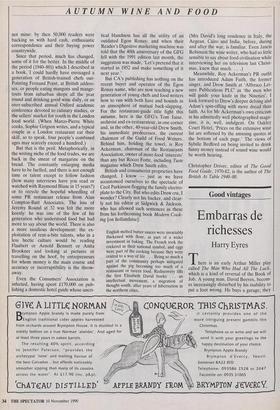 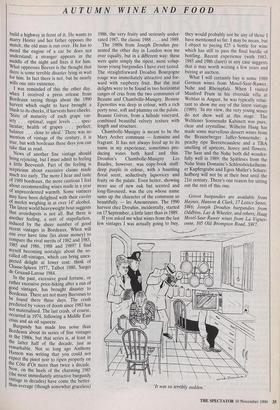 There is an early Arthur Miller play called The Man Who Had All The Luck, which is a kind of reversal of the Book of Job. A young man, David Beeves, becom- es increasingly disturbed by his inability to put a foot wrong. He buys a garage; they

build a highway in front of it. He wants to marry Hester and her father opposes the match; the old man is run over. He has to mend the engine of a car he does not understand; a stranger appears in the middle of the night and fixes it for him. What oppresses Beeves is the thought that there is some terrible disaster lying in wait for him. In fact there is not, but he nearly wills one into existence.

I was reminded of this the other day, when I received a press release from Bordeaux saying things about the 1990 harvest which ought to have brought a blush to its cheeks, if harvests have cheeks. `State of maturity of each grape var- iety . . . optimal; sugar levels . . . spec- tacular; health of grapes . . . perfect; balance . . . close to ideal.' There was no mention of vintage of the century, it is true, but with bordeaux these days you can take that as read.

News of another fine vintage should bring rejoicing, but I must admit to feeling a little Beevesish. Part of the feeling is scepticism about excessive claims made much too early. The more I hear and taste of 1989 bordeaux, the more cautious I feel about recommending wines made in a year of unprecedented warmth. Some vintners may have been delighted with their cuvees of merlot weighing in at over 14° alcohol. The latest world heavyweight bout suggests that avoirdupois is not all. But there is another feeling, a sort of stupefaction, induced by the sheer number of good recent vintages in Bordeaux. When will one ever have time (let alone money) to compare the rival merits of 1982 and 1983, 1985 and 1986, 1988 and 1989? I find myself becoming nostalgic about the so- called off-vintages, which can bring unex- pected delight at lower cost: think of Chasse-Spleen 1977, Talbot 1980, Sarget de Gruaud-Larose 1984.

In the past, excessive good fortune, or rather excessive price-hiking after a run of good vintages, has brought disaster to Bordeaux. There are not many Beeveses to be found there these days. The crash predicted by voices of doom since 1983 has not materialised. The last crash, of course, occurred in 1974, following a Middle East crisis and an oil squeeze. Burgundy has made less noise than Bordeaux about its series of fine vintages in the 1980s, but that series is, at least in the latter half of the decade, just as remarkable. Not so long ago Anthony Hanson was writing that you could not expect the pinot noir to ripen properly on the Cote d'Or more than twice a decade. Now, on the heels of the charming 1985 the most immediately attractive burgundy vintage in decades) have come the better- than-average (though somewhat graceless) 1986, the very fruity and seriously under- rated 1987, the classic 1988 . . . and 1989.

The 1989s from Joseph Drouhin pre- sented the other day in London won me over equally, but in a different way: these were quite simply the ripest, most volup- tuous young burgundies I have ever tasted. The straightforward Drouhin Bourgogne rouge was immediately attractive and for- ward with raspberry fruit. But the real delights were to be found in two horizontal ranges of crus from the two communes of Beaune and Chambolle-Musigny. Beaune Epenottes was deep in colour, with a rich porty nose, soft and plummy on the palate. Beaune Graves, from a hillside vineyard, combined beautiful velvety texture with length and structure.

Chambolle-Musigny is meant to be the Mary Archer commune — feminine and fragrant. It has not always lived up to its name in my experience, sometimes pro- ducing wines both hard and thin. Drouhin's Chambolle-Musigny Les Baudes, however, was copy-book stuff: deep purple in colour, with a haunting floral scent, seductively liquoricey and fruity on the palate. Even better, showing more use of new oak but scented and long-flavoured, was the cru whose name sums up the character of the commune so beautifully — les Amoureuses. The 1990 harvest chez Drouhin, incidentally, started on 17 September, a little later than in 1989.

If you asked me what wines from the last few vintages I was actually going to buy, they would probably not be any of those I have mentioned so far. I may be mean. but I object to paying £25 a bottle for wine which has still to pass the final hurdle of bottling. Recent experience (with 1983, 1985 and 1986 claret) in any case suggests that it may worth waiting a few years and buying at auction.

What I will certainly buy is some 1989 German wines from Mosel-Saar-Ruwer, Nahe and Rheinpfalz. When I visited Manfred Prum in his riverside villa at Wehlan in August, he was typically reluc- tant to show me any of the latest vintage (1989). 'In my view, the very young wines do not show well at this stage.' The Wehlener Sonnenuhr Kabinett was pure, clear and crystalline. Wilhelm Haag has made some marvellous dessert wines from the Brauneberger Juffer-Sonnenuhr: a peachy ripe Beereneauslese and a TBA smelling of apricots, honey and flowers. The Saar and the Nahe both did wonder- fully well in 1989: the Spatleses from the Nahe State Domaine's SchlossbOckelheim- er Kupfergrube and Egon Muller's Scharz- hofberg will not be at their best until the 21st century. There's one reason for sitting out the rest of this one.

'It was so terribly sudden.'