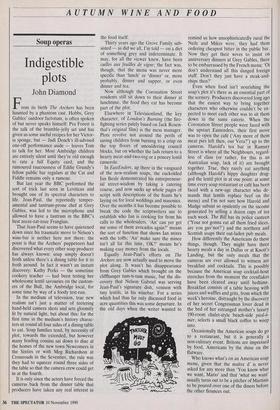 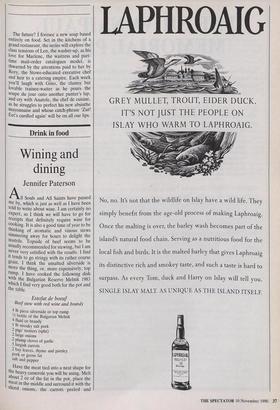 From its birth The Archers has been haunted by a phantom cast. Hobbs, Grey Gables' outdoor factotum, is often spoken of but never speaks himself; Pru Forest is the talk of the bramble-jelly set and has given us some useful recipes for her Victor- ia sponge, but — Judi Dench's ill-advised one-off performance aside — leaves Tom to talk for her. Most Ambridge children are entirely silent until they're old enough to rate a full Equity card, and the rumoured raucousness of Eddie Grundy's fellow public bar regulars at the Cat and Fiddle remains only a rumour.

But last year the BBC performed the sort of trick last seen in Leviticus and brought one of its spectral characters to life. Jean-Paul, the reportedly temper- amental and tantrum-prone chef at Grey Gables, was led to the microphone and allowed to have a tantrum in the BBC's best zeeze-zat-zoze Franglais.

That Jean-Paul seems to have quietened down since his traumatic move to Nelson's wine-bar is neither here nor there: the point is that the Archers' puppeteers had discovered what every other soap producer has always known: soap simply doesn't froth unless there's a dining table for it to froth around. In fact it wasn't an instant discovery: Kathy Perks — the sometime cookery teacher — had been testing her wholesome lentil savouries on the custom- ers of the Bull, the Ambridge local, for some time by way of a foody test-run.

In the medium of television, true new realism isn't just a matter of teetering hand-held camera shots and sets gloomily lit by natural light, but about this: for the first time in the medium's history charac- ters sit round all four sides of a dining table to eat. Soap families tend, by necessity of plot, towards the extended, but however many feuding cousins sat down to dine at the homes of the new town Newcomers in the Sixties or with Meg Richardson at Crossroads in the Seventies, the rule was they had to squeeze round three sides of the table so that the camera crew could get in at the fourth.

It is only since the actors have forced the cameras back from the dinner table that producers have taken any real interest in the food itself.

Thirty years ago the Grove Family sub- sisted — as did we all, I'm told — on a diet of something grey and indeterminate. It may, for all the viewer knew, have been milks aux feuilles de vigne; the fact was, though, that the menu was never more specific than 'lunch' or 'dinner' or, more probably, dinner and supper, or even dinner and tea.

Now although the Coronation Street residents still sit down to their dinner at lunchtime, the food they eat has become part of the plot.

Elsewhere in Televisionland, the key character, of London's Burning (the fire- fighting series palely based on Jack Rosen- thal's original film) is the mess manager. Plots revolve not around the perils of saving children from burning to a crisp on the top floors of smouldering council blocks, but on whether the lads return 40 a hearty meat-and-two-veg or a poncey lentil casserole.

In EastEnders, up there in the vanguard of the new-realism soaps, the cuckolded Ian Beale demonstrated his entrepreneur- ial street-wisdom by taking a catering course, and now sucks up whole pages of script with descriptions of the feasts he's laying on for local weddings and masonics. Over the months it has become possible to break the code the scriptwriters use to establish who Ian is cooking for from his calls to the wholesalers. 'An' can yer get me some of them avocados again?' means the sort of function that shows Ian mixes with the toffs; 'An' make sure the mince isn't all fat this time, OK?' means he's making easy money from the locals.

Equally Jean-Paul's efforts on The Archers are now actually used to move the plot along. It wasn't his disappearance from Grey Gables which brought on the cliffhanger tum-ti-tum music, but the dis- covery that Nelson Gabriel was serving Jean-Paul's signature dish, venison with tiny lentils, in his winebar. For a series which had thus far only discussed food in acre quantities this was some departure. In the old days when the writer wanted to remind us how unsophisticatedly rural the Neils and Mikes were, they had them ordering cheapest bitter in the public bar. Now they get their wives to insist on anniversary dinners at Grey Gables, there to be embarrassed by the French menu: '01 don't understand all this danged foreign stuff. Don't they just have a steak-and- chips then?'

Even when food isn't nourishing the soap's plot it's there as an essential part of the scenery. Producers discovered long ago that the easiest way to bring together characters who otherwise couldn't be ex- pected to meet each other was to sit them down in the same eaterie. When the Coronation Street people were faced with the upstart Eastenders, their first move was to open the café (`Any more of them meat pies left then, our Vera?') up to the cameras. Harold's tea bar in Ramsey Street is where all the Neighbours, regard- less of class (or rather, for this is an Australian soap, lack of it) are brought together. True, they rarely eat anything (although Harold's hippy daughter drag- ged the lentil plot in at one point: at some time every soap restaurant or café has been faced with a new-age character who de- mands that lentils replace beef on the menu) and I'm not sure how Harold and Madge subsist so opulently on the income generated by selling a dozen cups of tea each week. The Bill has its police canteen (`Your not gonna eat all them fried slices, are you guv'nor?') and the northern and Scottish soaps their oat-laden pub meals.

How differently the Americans do these things, though. They might have three hearty meals a day in Dallas or at Knott's Landing, but the only meals that the cameras are ever allowed to witness are breakfast and cocktails. This is possibly because the American soap cocktail-hour stretches from the moment the cornflakes have been cleared away until bedtime. Breakfast consists of a table heaving with juices and waffles and grits, from which the week's heroine, distraught by the discovery of her secret Congressman lover dead in the bed of her estranged mother's luxury 190-room chalet-style beach-side pied-a- mer, selects a small black coffee to weep into.

Occasionally the American soaps do go to a restaurant, but it is generally a non-culinary event. Britons are impressed by food, Americans by the shine on the flatware.

Who knows what's on an American soap menu, given that the maitre d' is never asked for any more than 'You know what we want, Mario' and that 'what we want' usually turns out to be a pitcher of Martinis to be poured over one of the diners before the other flounces out. The future? I foresee a new soap based entirely on food. Set in the kitchens of a grand restaurant, the series will explore the class tensions of Len, the washer-up, as his love for Marlene, the waitress and part- time mail-order catalogues model, is thwarted by the attentions paid to her by Rory, the Stowe-educated executive chef and heir to a catering empire. Each week you'll laugh with Gino, the clumsy but lovable trainee-waiter as he pours the soupe du jour onto another punter's lap, and cry with Anatole, the chef de cuisine, as he struggles to perfect his new absinthe mayonnaise and whose catch-phrase `Zut! Eet's curdled again' will be on all our lips.