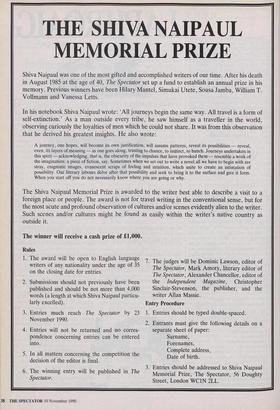 Shiva Naipaul was one of the most gifted and accomplished writers of our time. After his death in August 1985 at the age of 40, The Spectator set up a fund to establish an annual prize in his memory. Previous winners have been Hilary Mantel, Simukai Utete, Sousa Jamba, William T. Vollmann and Vanessa Letts.

In his notebook Shiva Naipaul wrote: 'All journeys begin the same way. All travel is a form of self-extinction.' As a man outside every tribe, he saw himself as a traveller in the world, observing curiously the loyalties of men which he could not share. It was from this observation that he derived his greatest insights. He also wrote:

A journey, one hopes, will become its own justification, will assume patterns, reveal its possibilities — reveal, even, its layers of meaning — as one goes along, trusting to chance, to instinct, to hunch. Journeys undertaken in this spirit — acknowledging, that is, the obscurity of the impulses that have provoked them — resemble a work of the imagination; a piece of fiction, say. Sometimes when we set out to write a novel all we have to begin with are stray, enigmatic images, evanescent scraps of feeling and intuition, which unite to create an intimation of possibility. Our literary labours delve after that possibility and seek to bring it to the surface and give it form. When you start off you do not necessarily know where you arc going or why.

The Shiva Naipaul Memorial Prize is awarded to the writer best able to describe a visit to a foreign place or people. The award is not for travel writing in the conventional sense, but for the most acute and profound observation of cultures and/or scenes evidently alien to the writer. Such scenes and/or cultures might be found as easily within the writer's native country as outside it.

1. The award will be open to English language writers of any nationality under the age of 35 on the closing date for entries.

2. Submissions should not previously have been published and should be not more than 4,000 words (a length at which Shiva Naipaul particu- larly excelled).

4. Entries will not be returned and no corres- pondence concerning entries can be entered into.

5. In all matters concerning the competition the decision of the editor is final.

2. Entrants must give the following details on a separate sheet of paper: Surname, Forenames, Complete address, Date of birth.