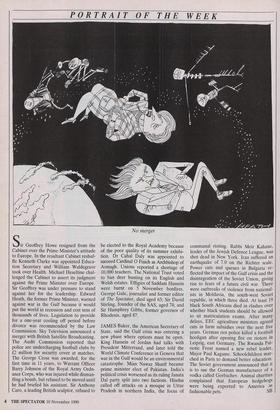 No merger Sit Geoffrey Howe resigned from the Cabinet over the Prime Minister's attitude to Europe. In the resultant Cabinet reshuf- fle Kenneth Clarke was appointed Educa- tion Secretary and William Waldegrave took over Health. Michael Heseltine chal- lenged the Cabinet to assert its judgment against the Prime Minister over Europe. Sir Geoffrey was under pressure to stand against her for the leadership. Edward Heath, the former Prime Minister, warned against war in the Gulf because it would put the world in recession and cost tens of thousands of lives. Legislation to provide for a one-year cooling off period before divorce was recommended by the Law Commission. Sky Television announced a merger with British Satellite Broadcasting. The Audit Commission reported that police are undercharging football clubs by £2 million for security cover at matches. The George Cross was awarded, for the first time in 11 years, to Warrant Officer Barry Johnson of the Royal Army Ordn- ance Corps, who was injured while disman- tling a bomb, but refused to be moved until he had briefed his assistant. Sir Anthony Caro, a leading British sculptor, refused to be elected to the Royal Academy because of the poor quality of its summer exhibi- tion. Dr Cahal Daly was appointed to succeed Cardinal 0 Fiaich as Archbishop of Armagh. Unions reported a shortage of 10,000 teachers. The National Trust voted to ban deer hunting on its English and Welsh estates. Effigies of Saddam Hussein were burnt on 5 November bonfires. George Gale, journalist and former editor of The Spectator, died aged 63; Sir David Stirling, founder of the SAS, aged 74; and Sir Humphrey Gibbs, former governor of Rhodesia, aged 87.

JAMES Baker, the American Secretary of State, said the Gulf crisis was entering a new phase where options must be open. King Hussein of Jordan had talks with President Mitterrand, and later told the World Climate Conference in Geneva that war in the Gulf would be an environmental catastrophe. Mian Nawaz Sharif became prime minister elect of Pakistan. India's political crisis worsened as its ruling Janata Dal party split into two factions. Hindus called off attacks on a mosque in Uttar Pradesh in northern India, the focus of communal rioting. Rabbi Meir Kahane,' leader of the Jewish Defence League, was shot dead in New York. Iran suffered an earthquake of 7.0 on the Richter scale. Power cuts and queues in Bulgaria re- flected the impact of the Gulf crisis and the disintegration of the Soviet Union, giving rise to fears of a future civil war. There were outbreaks of violence from national- ists in Moldavia, the south-west Soviet republic, in which three died. At least 19 black South Africans died in clashes over whether black students should be allowed to sit matriculation exams. After many delays, EEC agriculture ministers agreed cuts in farm subsidies over the next five years. German riot police killed a football hooligan after opening fire on rioters in Leipzig, east Germany. The Rwanda Pat- riotic Front named a new rebel leader, Major Paul Kagame. Schoolchildren mar- ched in Paris to demand better education. The Soviet government announced that it is to sue the German manufacturer of a vodka called Gorbachev. Animal charities complained that European hedgehogs were being exported to America as