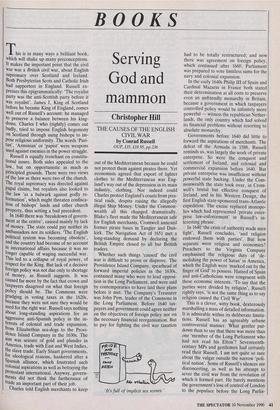 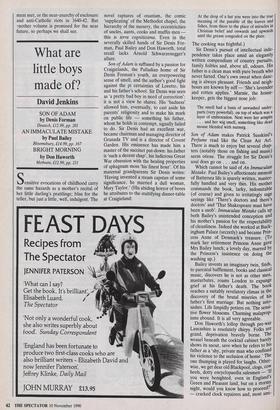 THE CAUSES OF THE ENGLISH CIVIL WAR by Conrad Russell

This is in many ways a brilliant book, which will shake up many preconceptions. It makes the important point that the civil war was a British civil war, about English supremacy over Scotland and Ireland. Both Presbyterian Scots and Catholic Irish had supporters in England. Russell ex- presses this epigrammatically: 'The royalist party was the anti-Scottish party before it was royalist'. James I, King of Scotland before he became King of England, comes well out of Russell's account: he managed to preserve a balance between his king- doms. Charles I who (rightly) comes out badly, tried to impose English hegemony on Scotland through using bishops to im- pose religious uniformity. The words 'Puri- tan', 'Arminian' or 'papist' were weapons used against enemies in the power struggle.

Russell is equally trenchant on constitu- tional issues. Both sides appealed to the law, but on opportunistic as much as principled grounds. There were two views of the law as there were two of the church. The royal supremacy was directed against Papal claims, but royalists also looked to the law 'as a bulwark against godly re- formation', which might threaten confisca- tion of bishops' lands and other church property, thus setting a bad precedent.

In 1640 there was 'breakdown of govern- ment at the centre', caused mainly by lack of money. The state could pay neither its ambassadors nor its soldiers. 'The English political system was becoming obsolete', and the country had become of no account in international affairs because it was no longer capable of waging successful war. This led to a collapse of royal power, of respect for the King. But lack of a decisive foreign policy was not due only to shortage Of money, as Russell suggests. It was Caused far more by the fact that crown and taxpayers disagreed on what that foreign policy should be. The Commons were grudging in voting taxes in the 1620s, because they were not sure they would be used for the right war. Russell says nothing about long-standing aspirations for an aggressive anti-Spanish policy in the in- terests of colonial and trade expansion, from Elizabethan sea-dogs to the Provi- dence Island Company in the 1630s. The aim was seizure of gold and plunder in America, trade with East and West Indies, the slave trade. Early Stuart governments, for ideological reasons, hankered after a Spanish alliance, which frustrated such colonial aspirations as well as betraying the protestant international. Anyway, govern- ments did not think the furtherance of trade an important part of their job. Charles told English merchants to keep out of the Mediterranean because he could not protect them against pirates there. Yet economists agreed that export of lighter clothes to the Mediterranean was Eng- land's way out of the depression in its main industry, clothing. Nor indeed could Charles protect England's coasts from pira- tical raids, despite raising the allegedly illegal Ship Money. Under the Common- wealth all this changed dramatically. Blake's fleet made the Mediterranean safe for English merchants, Cromwell annexed former pirate bases in Tangier and Dun- kirk. The Navigation Act of 1651 met a long-standing demand by declaring the British Empire closed to all but British traders.

Whether such things 'caused' the civil war is difficult to prove or disprove. The Providence Island Company, spearhead of forward imperial policies in the 1630s, contained many who were to lead opposi- tion in the Long Parliament, and were said by contemporaries to have laid their plans before it met. The Company's Treasurer was John Pym, leader of the Commons in the Long Parliament. Before 1640 tax- payers and government could agree neither on the objectives of foreign policy nor on the necessary financial reorganisation. But to pay for fighting the civil war taxation 'It's full of implicit sex scenes.' had to be totally restructured; and now there was agreement on foreign policy, which continued after 1660. Parliament was prepared to vote limitless sums for the navy and colonial expansion.

In the early 1640s Philip III of Spain and Cardinal Mazarin in France both stated their determination at all costs to preserve even an unfriendly monarchy in Britain, because a government in which taxpayers controlled policy would be infinitely more powerful — witness the republican Nether- lands, the only country which had solved its financial problems without resorting to absolute monarchy.

Governments before 1640 did little to forward the aspirations of merchants. The defeat of the Armada in 1588, Russell reminds us, was largely the work of private enterprise. So were the conquest and settlement of Ireland, and colonial and commercial expansion before 1640. But private enterprise was insufficient without powerful state backing. Under the Com- monwealth the state took over, in Crom- well's brutal but effective conquest of Ireland, and in his Western Design, the first English state-sponsored trans-Atlantic expedition. The excise replaced monopo- lies which had represented 'private enter- prise law-enforcement' in Russell's in- teresting phrase.

In 1640 'the crisis of authority made men fight', Russell concludes, 'and religion endowed them with parties'. But how separate were religion and economics? Preachers to the Virginia Company emphasised the religious duty of 'de- molishing the power of Satan' in America, which the English were 'marked out by the finger of God' to possess. Hatred of Spain and anti-Catholicism were congruent with these economic interests. `To say that the parties were divided by religion', Russell rightly says, 'is not the same thing as to say religion caused the Civil War'.

This is a clever, witty book, dexterously marshalling a mass of detailed information.

It is admirable within its deliberate limita- tions. Russell has an agreeably urbane controversial manner. What gentler put- down than to say that there was more than one 'member of the Long Parliament who had not read his Elton'? Seventeenth- century MPs and gentlemen had certainly read their Russell. I am not quite so sure about the vulgar outside the narrow 'poli- tical nation'. Some of Russell's silences are disconcerting, as well as his attempt to sever the civil war from the revolution of which it formed part. He barely mentions the government's loss of control of London to the populace before the Long Parlia- ment met, or the near-anarchy of enclosure and anti-Catholic riots in 1640-42. But ',.nother volume is promised for the near future, so perhaps we shall see.