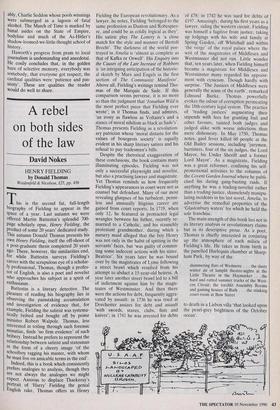 A rebel on both sides of the law

This is the second fat, full-length biography of Fielding to appear in the space of a year. Last autumn we were offered Martin Battestin's splendid 700- page scholarly opus, Henry Fielding, the product of some 20 years' dedicated study. This autumn Donald Thomas presents his own Henry Fielding, itself the off-shoot of a post-graduate thesis completed 20 years ago. There, however, the similarities end, for while Battestin surveys Fielding's career with the scrupulous eye of a scholar- ly professional, Thomas, though a profes- sor of English, is also a poet and novelist who approaches his subject in a spirit of enthusiasm.

Battestin is a literary detective. The pleasure of reading his biography lies in observing the painstaking accumulation and investigation of evidence that, for example, Fielding the satirist was systema- tically bribed and bought off by prime minister Robert Walpole. Thomas, less Interested in toiling through such forensic minutiae, finds 'no firm evidence' of such bribery. Instead he prefers to represent the relationship between satirist and statesman In the form of a cheery image 'of the schoolboy ragging his master, with whom he must live on amicable terms in the end'.

Indeed, this is a book which consistently prefers analogies to analysis, though they are not always the analogies we might expect. Anxious to displace Thackeray's portrait of 'Harry' Fielding the genial English rake, Thomas offers us Henry Fielding the European revolutionary. As a lawyer, he notes, Fielding 'belonged to the same profession as Danton and Robespier- re, and could be as coldly logical as they'. His satiric play The Lottery is 'a close match for the style and manner of Bertolt Brecht'. The darkness of the world por- trayed in Amelia is 'almost as complete as that of Kafka or Orwell'. His Enquiry into the Causes of the Late Increase of Robbers is 'an intriguing anticipation of the historic- al sketch by Marx and Engels in the first section of The Communist Manifesto'. Above all, Fielding's writings remind Tho- mas of the Marquis de Sade. If this comparison seems perverse, it is no more so than the judgment that 'Jonathan Wild is the most perfect piece that Fielding ever wrote'; in it Thomas finds, and admires, 'an irony as flawless as Voltaire's and a stance of moral nihilism as black as Sade's'. Thomas presents Fielding as a revolution- ary patrician whose 'moral distaste for the values of bourgeois society' is equally evident in his sharp literary satires and his refusal to pay tradesmen's bills.

Despite the rhetorical exaggeration of these conclusions, the book contains many illuminating episodes. Fielding was not only a successful playwright and novelist, but also a practising lawyer and magistrate. Yet Thomas reminds us how frequently Fielding's appearances in court were not as counsel but defendant. Many of our most revealing glimpses of his turbulent, penni- less and unusually litigious career are gained from court reports. In 1719, when only 12, he featured in protracted legal wrangles between his father, recently re- married to a Catholic, and his staunchly protestant grandmother, during which a nursery maid alleged that the boy Henry was not only in the habit of spitting in the servants' faces, but 'was guilty of commit- ting some indecent actions with his sister, Beatrice'. Six years later he was bound over by the magistrates of Lyme following a street brawl which resulted from his attempt to abduct a 15-year-old heiress. A year later another street brawl led to a bill of indictment against him by the magis- trates of Westminster. And then there were the actions for debt, frequently aggra- vated by assault:. in 1736 he was tried at Dorchester assizes for debt and assault 'with swords, staves, clubs, fists and knives'; in 1741 he was arrested for debts

of E78; in 1742 he was sued for debts of £197. Amazingly, during his first years as a lawyer, riding the western circuit, Fielding was himself a fugitive from justice, taking up lodgings with his wife and family at Spring' Garden, off Whitehall and within 'the verge' of the royal palace where the writ of the magistrates of Middlesex and Westminster did not run. Little wonder that, ten years later, when Fielding himself became a magistrate for Middlesex and Westminster many regarded his appoint- ment with cynicism. Though hardly with surprise. 'The Justices of Middlesex were generally the scum of the earth', remarked Edmund Burke. Thomas powerfully evokes the odour of corruption permeating the 18th-century legal system. The practice of 'trading justices' augmenting their stipends with fees for granting bail and other favours, tainted both judges and judged alike with worse infections than mere dishonesty. In May 1750, Thomas notes, gaol fever killed 60 people at the Old Bailey sessions, including 'jurymen, barristers, four of the six judges, the Lord Mayor, his Under Sheriff and a former Lord Mayor'. As a magistrate, Fielding was a great reformer, confining his self- promotional activities to the columns of the Covent Garden Journal where he publi- cised his daring gang-busting raids. If anything he was a trading-novelist rather than a trading-justice, shamelessly manipu- lating incidents in his last novel, Amelia, to advertise the remedial properties of the 'Glastonbury waters' for which he held the sole franchise.

The main strength of this book lies not in its literary analysis or revolutionary claims but in its descriptive prose. As a poet, Thomas is chiefly interested in conjuring up the atmosphere of each milieu of Fielding's life. He takes us from birth in the panelled Harlequin chamber at Sharp- ham Park, by way of the

shimmering flats of Wedmore . . . the dusty winter air of lamplit theatre-nights at the Little Theatre in the Haymarket . . . the hard and rutted summer tracks of the West- ern Circuit; the torchlit Assembly Rooms and gaming houses of Bath . . . the stinking court-room at Bow Street

to death in a Lisbon villa 'that looked upon the pearl-grey brightness of the October ocean'.