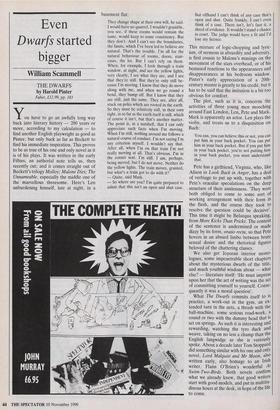 THE DWARFS by Harold Pinter Faber, 112.99, pp. 183 You have to go an awfully long way back into literary history — 200 years or more, according to my calculation — to find another English playwright as good as Pinter; but only back as far as Beckett to find his immediate inspiration. This proves to be as true of his one and only novel as it is of his plays. It was written in the early Fifties, an authorial note tells us, then recently cut; and it comes straight out of Beckett's trilogy Molloy; Malone Dies; The Unnameable, especially the middle one of the marvellous threesome. Here's Len unburdening himself, late at night, in a

They change shape at their own will, he said. I would have no quarrel, I wouldn't grumble, you see, if these rooms would remain the same, would keep to some consistency. But they don't. And I can't see the boundaries, the limits, which I've been led to believe are natural. That's the trouble. I'm all for the natural behaviour of rooms, doors, stair- cases, the lot. But I can't rely on them. When, for example, I look through a train window, at night, and see the yellow lights, very clearly, I see what they arc, and I see that they're still. But they're only still be- cause I'm moving. I know that they do move along with me, and when we go round a bend, they bump off. But I know that they are still, just the same. They are, after all, stuck on poles which are rooted in the earth. So they must be relatively still, in their own right, in so far as the earth itself is still, which of course it isn't, but that's another matter. The point is, in a nutshell, that I can only appreciate such facts when I'm moving. When I'm still, nothing around me follows a natural course of conduct. I'm not saying I'm any criterion myself. I wouldn't say that. After all, when I'm on that train I'm not really moving at all. That's obvious. rm in the corner seat. I'm still. I am, perhaps, being moved, but I do not move. Neither do the yellow lights. The train moves, granted, but what's a train got to do with it?

So where are you? I'm quite prepared to admit that this isn't an open and shut case. But offhand I can't think of any case that's open and shut. Quite frankly, I can't even think of a case. There isn't, let's face it, a shred of evidence. It wouldn't stand a chance in court. The judge would have a fit and I'd lose my licence.

This mixture of logic-chopping and lyric- ism, of sermons in absurdity and adversity, is first cousin to Malone's musings on the movement of the stars overhead, or of his bemused reactions to the appearances and disappearances at his bedroom window. Pinter's early appreciation of a 20th- century master is greatly to his credit, but it has to be said that the imitation is a bit too obvious for comfort.

The plot, such as it is, concerns the activities of three young men mooching around East London, Len, Pete and Mark. Mark is apparently an actor. Len plays the violin, and treats us to a disquisition on Bach:

Pete has a girlfriend, Virginia, who, like Alison in Look Back in Anger, has a deal of verbiage to put up with, together with Pete's oracular speculations on the deep structure of their aimlessness. 'They were both obliged to come to some sort of working arrangement with their form in the flesh, and the course they took to resolve the question could be decisive'. This time it might be Belacqua speaking, from More Kicks Than Pricks. The content of the sentence is undermined or made dizzy by its form, oratio recta, so that Pete hovers in an absurd limbo between brute sexual desire and the rhetorical figures beloved of the chattering classes.

We also get Joycean interior mono- logues, some impenetrable short chapters about the mysterious dwarfs of the title, and much youthful wisdom about — what else? — literature itself: 'He must impress upon her that the act of writing was the act of committing yourself to yourself. Conse- quently it was a moral question'.

What The Dwarfs commits itself to is practice, a work-out in the gym, an ex- tended turn in the nets, a thrash with the ball-machine, some serious road-work, .a round or two with the dummy head that Is set on springs. As such it is interesting and rewarding, watching the tyro duck and weave, taking on no less a champ than the English langwidge as she is variously spoke. About a decade later Tom Stoppard did something similar with his one and only novel, Lord Malquist and Mr Moon, also written early, also homage to an Irish writer, Flann O'Brien's wonderful Al Swim-Two-Birds. Both novels confirm what we already knew, that good writers start with good models, and put in multitu- dinous hours at the desk, in hope of the life to come.