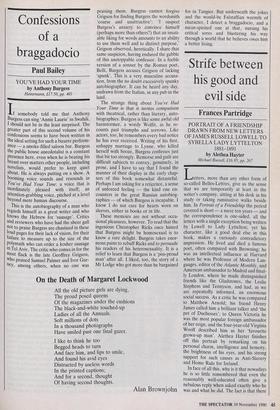 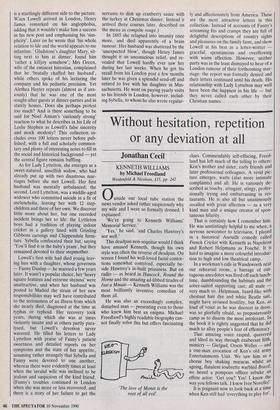 Strife between his good and evil side

Letters, more than any other form of so-called Belles-Lettres, give us the sense that we are temporarily at least in the writer's company, sitting at his desk in his study or taking ruminative walks beside him. In Portrait of a Friendship the period covered is short — a mere ten years — and the correspondence is one-sided, all the letters with a single exception being written by Lowell to Lady Lyttelton; yet his character, like a good deal else in this book, makes a curiously contradictory impression. He lived and died a famous poet, often compared with Browning; he was an intellectual influence at Harvard where he was Professor of Modern Lan- guages, editor of the Atlantic Monthly, and American ambassador to Madrid and final- ly London, where he made distinguished friends like the Gladstones, the Leslie Stephens and Tennyson, and had, as we are repeatedly informed, an enormous social success. As a critic he was compared to Matthew Arnold; his friend Henry James called him a brilliant talker and 'the pet of Duchesses'; to Queen Victoria he was the most popular foreign ambassador of her reign, and the four-year-old Virginia Woolf described him as her 'favourite grown-up man'. Alethea Hayter finishes off this portrait by remarking on his personal charm, intelligence and honesty, the brightness of his eyes, and his strong support for such causes as Anti-Slavery and Home Rule for Ireland.

In face of all this, why is it that nowadays he is so little remembered that even the reasonably well-educated often give a nebulous reply when asked exactly who he was and what he did. The fact is that there is a startlingly different side to the picture. w:ien Lowell arrived in London, Henry James remarked on his anglophobia, adding that it wouldn't make him a success in his new post and emphasising his 'sim- plicity'. Later on he wrote that 'his whole relation to life and the world appears to me infantine.' Gladstone's daughter Mary, sit- ting next to him at dinner, found him `rather a killjoy somehow'; Mrs Green, wife of the eminent historian, complained that he 'brutally chaffed her husband', while others spoke of his lecturing the company and his pedantic precision. Yet Alethea Hayter repeats (almost as if anx- iously) that he was one of the most sought-after guests at dinner-parties and in stately homes. Does she perhaps protest too much? And is there something to be said for Noel Annan's 'curiously strong' reaction to what he describes in his Life of Leslie Stephen as Lowell's false sincerity and mock modesty? This collection in- cludes over 100 letters never before pub- lished, with a full and scholarly commen- tary and plenty of interesting notes to fill in the social and historical background — yet the central figure remains baffling.

As for Lady Lyttelton, she emerges as a sweet-natured, unselfish widow, who had already put up with two disastrous mar- riages before she met Lowell. Her first husband was mentally unbalanced; the second, Lord Lyttelton, was a middle-aged widower who committed suicide in a fit of melancholia, leaving her with 12 step- children and three of her own. We discover little more about her, but one recorded incident brings her to life: the Lyttleton boys had a tradition of playing indoor cricket in a gallery lined with Grinling Gibbons carvings and Chippendale furni- ture. Sybella confiscated their bat, saying `You'll find it in the baby's pram', but they remained devoted to their stepmother.

Lowell's first wife had died young leav- ing him with a daughter, whose governess — Fanny Dunlap — he married a few years later. It wasn't a popular choice, her 'heavy square features and extreme shyness' were unattractive, and when her husband was posted to Madrid the strain of her new responsibilities may well have contributed to the seriousness of an illness from which she nearly died, diagnosed at the time as typhus or typhoid. Her recovery took years, during which she was at times violently insane and at others partly para- lysed, but Lowell's devotion never wavered. He filled his letters to Lady Lyttelton with praise of Fanny's patient sweetness and detailed reports on her symptoms and the state of her appetite, assuming rather strangely that Sybella and Fanny were devoted to one another, whereas there were evidently times at least when the invalid wife was inclined to be jealous and suspicious of the kind friend. (Fanny's troubles continued in London when she was more or less recovered, and there is a story of her failure to get the servants to dish up cranberry sauce with the turkey at Christmas dinner. Instead it arrived three courses later, described on the menu as compote rouge.) In 1885 she relapsed into insanity once more, and died apparently of a brain tumour. Her husband was shattered by the `unexpected blow', though Henry James thought it an unconscious relief, and re- vealed that Lowell hardly ever saw her during her last weeks. When he got his recall from his London post a few months later he was given a splendid send-off and retired to live with his daughter in Mas- sachusetts. He went on paying yearly visits to his friends in London, however, includ- ing Sybella, to whom he also wrote regular- ly and affectionately from America. These are the most attractive letters in this collection. Instead of accounts of Fanny's screaming fits and cramps they are full of delightful descriptions of country sights and pleasures on the family farm, and show Lowell at his best as a letter-writter graceful, spontaneous and overflowing with warm affection. However, neither party was in the least dismayed to hear of a London rumour of their forthcoming mar- riage: the report was formally denied and their letters continued until his death. His relationship with Lady Lyttelton may well have been the happiest in his life — but they never called each other by their Christian names.