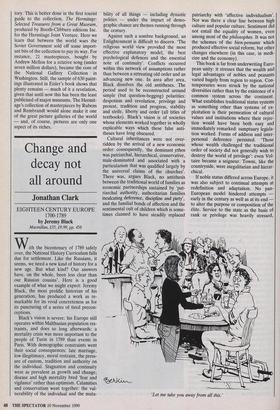 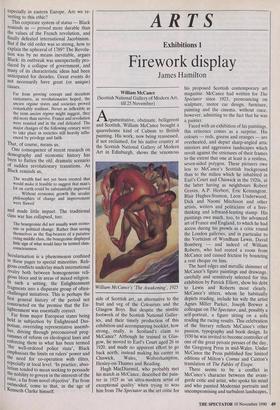 Change and decay not all around

With the bicentenary of 1789 safely over, the National History Curriculum falls due for settlement. Like the Russians, it seems, we need a new kind of history for a new age. But what kind? Our answers have, on the whole, been less clear than our Russian cousins'. Here is a good example of what we might expect: Jeremy Black, the most prolific historian of his generation, has produced a work as re- markable for its vivid concreteness as for its puncturing of a series of tired precon- ceptions.

Black's vision is severe: his Europe still operates within Malthusian population res- traints, and does so long afterwards: a mortality crisis was more important to the people of Turin in 1789 than events in Paris. With demographic constraints went their social consequences: late marriage, low illegitimacy, moral restraint, the press- ure of custom, tradition and authority on the individual. Stagnation and continuity were as prevalent as growth and change; disease and high mortality bred 'fear and vigilance' rather than optimism. Calamities and conservatism went together: the vul- nerability of the individual and the muta- bility of all things — including dynastic politics — under the impact of demo- graphic chance are themes running through the century.

Against such a sombre background, an Enlightenment is difficult to discern. 'The religious world view provided the most effective explanatory model, the best psychological defences and the essential note of continuity'. Conflicts occurred within this network of assumptions rather than between a retreating old order and an advancing new one. In area after area, Black dissolves the old antitheses. The period used to be reconstructed around simple (but question-begging) polarities: despotism and revolution, privilege and protest, tradition and progress, stability and strife, liberty and order (all titles of textbooks). Black's vision is of societies whose elements worked together in wholly explicable ways which these false anti- theses have long obscured.

Cultural inheritances were not over- ridden by the arrival of a new economic order: consequently, 'the dominant ethos was patriarchal, hierarchical, conservative, male-dominated and associated with a particularism that was qualified largely by the universal claims of the churches'. There was, argues Black, no antithesis between the traditional world of families as economic partnerships sustained by 'pat- riarchal authority, authoritarian families inculcating deference, discipline and piety', and the familial bonds of affection and the sentimental cult of children which is some- times claimed to have steadily replaced patriarchy with 'affective individualism'. Nor was there a clear line between high culture and popular culture. Sentiment did not entail the equality of women, even among most of the philosophes. It was not the schemes of the bien-pensants which produced effective social reform, but other changes elsewhere (in this case, in medi- cine and the economy).

This book is far from underwriting Euro- pean unity: it stresses that the wealth and legal advantages of nobles and peasants varied hugely from region to region. Con- temporaries were struck by the national diversities rather than by the existence of a common system across the continent. What establishes traditional status systems as something other than systems of ex- ploitation is their permeation of cultural values and institutions where their rejec- tion would have been both easy and immediately remarked: sumptuary legisla- tion worked. Forms of address and inter- personal deference persisted. 'Those whose wealth challenged the traditional order of society did not generally wish to destroy the world of privilege': even Vol- taire became a seigneur. Towns, like the countryside, were inegalitarian and hierar- chical.

If noble status differed across Europe, it was also subject to continual attempts at redefinition and adaptation. No pan- European model hindered attempts early in the century as well as at its end to alter the purpose or composition of the elite. Service to the state. as the basis of rank or privilege was heavily stressed, 'Let me take you away from all this.'

especially in eastern Europe. Are we re- verting to this ethic?

This corporate system of status — Black reminds us — proved more durable than the values of the French revolution, and finally defeated international Jacobinism. But if the old order was so strong, how to explain the upheaval of 1789? The Revolu- tion was by no means inevitable, argues Black: its outbreak was unexpectedly pro- duced by a collapse of government, and many of its characteristic ideas had been anticipated for decades. Great events do not necessarily have great (or unique) causes.

Far from proving corrupt and decadent caricatures, as revolutionaries hoped, the ancien regime states and societies proved remarkably resilient. Never as inflexible as the term ancien regime might suggest, they did more than survive. France and revolution were resisted and in the end defeated. The major changes of the following century were to take place in societies still heavily influ- enced by privilege and faith.

That, of course, means us.

One consequence of recent research on demography and economic history has been to flatten the old, dramatic scenario of sudden revolutionary transitions. As Black reminds us, The wealth had not yet been created that would make it feasible to suggest that man's lot on earth could be substantially improved Without economic growth the secular philosophies of change and improvement were flawed and made little impact. The traditional class war has collapsed, too: The bourgeoisie did not usually want econo- mic or political change. Rather than seeing themselves as the flag-bearers of a putative rising middle class, the bourgeoisie displayed little sign of what would later be termed class- consciousness.

Secularisation is a phenomenon confined in these pages to special minorities. Reli- gious conflicts underlay much international rivalry both between homogeneous reli- gious blocs and in areas of mixed religion. In such a setting, the Enlightenment fragments into a disparate group of often- challenged initiatives. This is perhaps the first general history of the period not constructed on the premise that the En- lightenment was essentially correct.

Far from major European states being held in subjection by Enlightened Des- potism, overriding representative assemb- lies, driving through preconceived prog- rammes of reform on ideological lines and enforcing them in what has been termed the well-ordered police state', Black emphasises the limits on rulers' power and the need for co-operation with elites, especially at local level. 'In practice, abso- lutism tended to mean seeking to persuade the nobility to govern in the interests of the ruler, a far from novel objective'. Far from Outmoded, come to that, in the age of Kenneth Clarke himself.