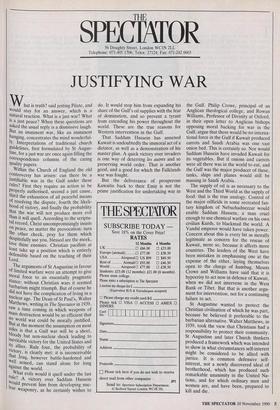 i would stay for an answer, which is a natural reaction. What is a just war? What is a just peace? When these questions are asked the usual reply is a dismissive laugh. But an imminent war, like an imminent hanging, concentrates the mind wonderful- ly. Interpretations of traditional church guidelines, first formulated by St Augus- tine, for a just war are once again filling the correspondence columns of the caring quality papers.

Within the Church of England the old controversy has arisen: can there be a Justifiable war in the Gulf under these rules? First they require an action to be properly authorised, second a just cause, third the exhaustion of all peaceful means of resolving the dispute, fourth the likeli- hood of victory, and finally the probability that the war will not produce more. evil than it will quell. According to the scriptu- ral record, Christ uncompromisingly insists on peace, no matter the provocation: turn the other cheek, pray for them which despitefully use you, blessed are the meek, love thine enemies. Christian pacifists at least take up a position which is entirely defensible based on the teaching of their Lord.

The arguments of St Augustine in favour of limited warfare were an attempt to give moral force to an essentially pragmatic stance: without Christian wars it seemed barbarism might triumph. But of course he did not have the complication of living in a nuclear age. The Dean of St Paul's, Walter Matthews, writing in The Spectator in 1939, saw a time coming in which weapons of mass destruction would be so efficient that no world war could be morally justified. But at the moment the assumption on most sides is that a Gulf war will be a short, 13. loody but non-nuclear shock leading to inevitable victory for the United States and its allies. Rule four, the probability of victory, is clearly met: it is inconceivable that Iraq, however battle-hardened and well armed, can stand alone for long against the world. What evils would it quell under the last rule? A victory over Saddam Hussein 'A' ould prevent him from developing nuc- lear weaponry, as he certainly wishes to

do. It would stop him from expanding his share of the Gulf's oil supplies with the fear of domination, and so prevent a tyrant from extending his power throughout the world. These are the true reasons for Western intervention in the Gulf.

That Saddam Hussein has annexed Kuwait is undoubtedly the immoral act of a dictator, as well as a demonstration of his master plan. A quick victory over invaders is one way of deterring les autres and so preserving world order. That is another good, and a good for which the Falklands war was fought.

But the deliverance of prosperous Kuwaitis back to their Emir is not the prime justification for undertaking war in the Gulf. Philip Crowe, principal of an Anglican theological college, and Rowan Williams, Professor of Divinity at Oxford, in their open letter to Anglican bishops opposing moral backing for war in the Gulf, argue that there would be no interna- tional force in the Gulf if Kuwait produced carrots and Saudi Arabia was one vast onion bed. This is certainly so. Nor would Saddam Hussein have invaded Kuwait for its vegetables. But if onions and carrots were all there was in the world to eat, and the Gulf was the major producer of these, tanks, ships and planes would still be massing in Saudi Arabia.

The supply of oil is as necessary to the West and the Third World as the supply of food: that is the true analogy. Control of the major oilfields in some recreated fan- tasy kingdom of Nebuchadnezzar would enable Saddam Hussein, a man cruel enough to use chemical warfare on his own civilian Kurds, to blackmail the world. A Vandal emperor would have taken power. Concern about this is every bit as morally legitimate as concern for the rescue of Kuwait, more so, because it affects more countries. The leaders of the West have been mistaken in emphasising one at the expense of the other, laying themselves open to the charge of humbug. Messrs Crowe and Williams have said that it is hypocrisy to act now in defence of Kuwait, when we did not intervene in the West Bank or Tibet. But that is another argu- ment for intervention, not for a continuing failure to act.

St Augustine wanted to protect the Christian civilisation of which he was part, because he believed it preferable to the barbarian alternative. Walter Matthews, in 1939, took the view that Christians had a responsibility to protect their community. St Augustine and later Church thinkers produced a framework which was intended to show in what circumstances self-interest might be considered to be allied with justice. It is common defensive self- interest, not a newly discovered ideal of brotherhood, which has produced such remarkable unanimity in the United Na- tions, and for which ordinary men and women are, and have been, prepared to kill and die.