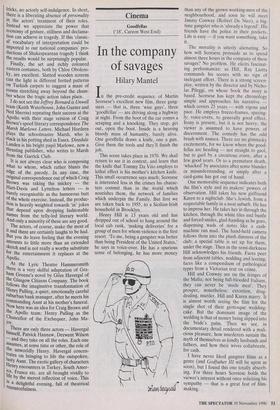 In the company of savages

In the pre-credit sequence of Martin Scorsese's excellent new film, three gang- sters — that is, three 'wise guys', three `goodfellas' — are driving along a highway at night. From the boot of the car comes a scraping and a knocking. They stop, get out, open the boot. Inside is a heaving bloody mass of humanity, barely alive. One goodfella draws a knife, one a gun. Give them the tools and they'll finish the job.

This scene takes place in 1970. We shall return to see it in context, and learn that the knife that Tommy Da Vito employs to lethal effect is his mother's kitchen knife. This small occurrence says much; Scorsese is interested less in the crimes his charac- ters commit than in the world which nourishes them, the network of families which underpin the Family. But first we are taken back to 1955, to a Sicilian-Irish household in Brooklyn.

Henry Hill is 13 years old and has dropped out of school to hang around the local cab rank, 'making deliveries' for a group of men for whom violence is the first resort. 'To me, being a gangster was better than being President of the United States,' he says in voice-over. He has a spurious sense of belonging, he has more money than any of the grown working-men of the neighbourhood, and soon he will meet Jimmy Conway (Robert De Niro), a big- time gangster who is 'already a legend'. His friends have the police in their pockets. Life is easy — if you want something, take it.

The morality is utterly alienating. So how will Scorsese persuade us to spend almost three hours in the company of these savages? No problem. He elicits fascinat- ing performances: as Hill, Ray Liotta commands his scenes with no sign of inelegant effort. There is a strong screen- play, written by the director and by Nicho- las Pileggi, on whose book the story is based. Scorsese has kept the chronology simple and approaches his narrative which covers 25 years — with vigour and pace. He employs freeze-frames, sparing- ly; voice-overs, to generally good effect. Irony is present, but it is not heavy; the viewer is assumed to have powers of discernment. The comedy has the odd brush with nausea. There are no gimmicky excitements, for we know where the good- fellas are heading — not straight to gaol, but to gaol by a circuitous route, after a few good years. Or to a premature death, `whacked' by associates after some blunder or misunderstanding, or simply after a card-game has got out of hand.

' One memorable sequence indicates both the film's style and its makers' powers of observation. Hill takes his new girlfriend Karen to a nightclub. She's Jewish, from a respectable family in a neat suburb. He has to impress her. He takes her in through the kitchen, through the white tiles and bustle and forced smiles, glad-handing as he goes, dispensing wads of notes like a cash- machine run mad. The hand-held camera follows them into the plush dimness of the club; a special table is set up for them, under the stage. Then in the semi-darkness Hill acknowledges his friends. Faces peer from adjacent tables, nodding and leering, faces like a compendium of pathological types from a Victorian text on crime.

Hill and Conway are on the fringes of the Mafia; not being full-blooded Italians, they can never be 'made men'. They prosper, nonetheless: extortion, drug- dealing, murder. Hill and Karen marry. It is almost worth seeing the film for the single shot of their grotesque wedding- cake. But the dominant image of the wedding is that of money being slipped into the bride's palm. Then we see, in documentary detail rendered with a mali- cious pleasure, how murderers sustain the myth of themselves as kindly husbands and fathers, and how their wives collaborate, for cash.

I have never liked gangster films as a genre (and Godfather III will be upon us soon), but I found this one totally absorb- ing. For three hours Scorsese holds the viewer's interest without once soliciting his sympathy — that is a great feat of film- making.