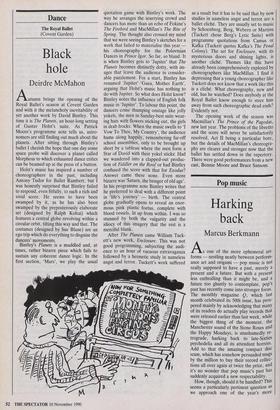 Autumn brings the opening of the Royal Ballet's season at Covent Garden and with it the melancholy inevitability of yet another work by David Bintley. This time it is The Planets, an hour-long setting of Gustav Hoist's suite. As Patrick Moore's programme note tells us, astro- nomers are still finding out much about the planets. After sitting through Bintley's ballet I cherish the hope that one day some space probe will discover a planet called Morpheus to which exhausted dance critics can be beamed up at the press of a button.

Hoist's music has inspired a number of choreographers in the past, including Antony Tudor for Ballet Rambert, but I was honestly surprised that Bintley failed to respond, even fitfully, to such a rich and vivid score. He seems to have been swamped by it, as he has also been swamped by the preposterously elaborate set (designed by Ralph Koltai) which features a central globe revolving within a circular orbit, tilting this way and that. The costumes (designed by Sue Blane) are an ego trip which do everything to disguise the dancers' movements.

Bintley's Planets is a muddled and, at times, rather bizarre piece which fails to sustain any coherent dance logic. In the first section, 'Mars', we play the usual quotation game with Bintley's work. The way he arranges the scurrying crowd and dancers has more than an echo of Fokine's The Firebird and MacMillan's The Rite of Spring. The thought also crossed my mind that we were seeing Bintley's sketches for a work that failed to materialise this year his choreography for the Polovtsian Dances in Prince Igor. So far, so bland. It is when Bintley gets to 'Jupiter' that The Planets becomes distinctly dotty, with im- ages that leave the audience in consider- able puzzlement. For a start, Bintley has renamed `Jupiter"Gaea, Mother Earth', arguing that Hoist's music has nothing to do with Jupiter. So what does Hoist know? Bintley notes the influence of English folk music in 'Jupiter'. To labour this point, the dancers come thumping onstage like jolly yokels, the men in Sunday-best suits wear- ing hats with flowers sticking out, the girls in drab frocks. When the music swells to 'I Vow To Thee, My Country', the audience hums along happily, remembering far-off school assemblies, only to be brought up short by a tableau where the men form a Star of David with their yokel sticks. Had we wandered into a clapped-out produc- tion of Fiddler on the Roof or had Bintley confused the score with that for Exodus? Answer came there none. Even more bizarre was 'Saturn, the bringer of old age'. In his programme note Bintley writes that he preferred to deal with a different point in `life's journey' — birth. The central globe gradually opens to reveal an enor- mous pink plastic foetus, complete with blood vessels, lit up from within. I was so stunned by both the vulgarity and the idiocy of this imagery that the rest is a merciful blank.

After The Planets came William Tuck- ett's new work, Enclosure. This was not good programming, subjecting the audi- ence to an hour of vacuous extravaganza followed by a hermetic study in nameless angst and terror. Tuckett's work suffered as a result but it has to be said that by now studies in nameless angst and terror are a ballet cliché. They are usually set to music by Schoenberg, Berg, Webern or Martinu (Tuckett chose Berg's Lyric Suite) with programme quotations from Camus or Kafka (Tuckett quotes Kafka's The Penal Colony). The set for Enclosure, with its mysterious doors and shining lights, is another cliché. Themes like this have already been comprehensively explored by choreographers like MacMillan. I find it depressing that a young choreographer like Tuckett does not know that a work like this is a cliché. What choreography, new and old, has he watched? Does anybody at the Royal Ballet know enough to steer him away from such choreographic dead ends? Evidently not.

The opening work of the season was Macmillan's The Prince of the Pagodas, new last year. The problems of the libretto and the score will never be satisfactorily resolved, Act II being a particular bore, but the details of MacMillan's choreogra- phy are clearer and stronger now that the ballet has settled down in the repertory. There were good performances from a new cast, Bonnie Moore and Bruce Sansom.