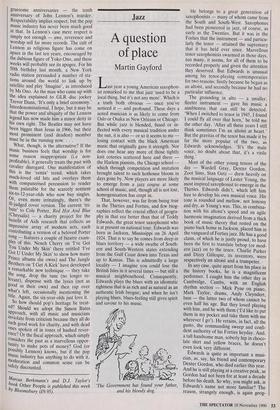 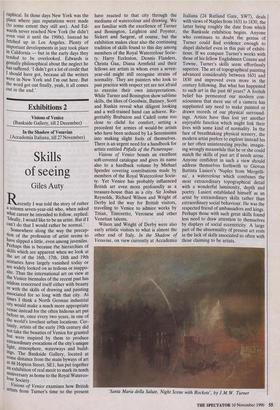 A question of place

Last year a young American saxophon- ist remarked to me that jazz `used to be a local thing, but it's not any more'. Which is a truth both obvious — once you've noticed it — and profound. These days a noted musician is as likely to come from Oslo or Osaka as New Orleans or Chicago. But while jazz is blended, fused or in- flected with every musical tradition under the sun, it is also — or so it seems to me losing contact with the black American music that originally gave it strength. Nor does one hear any more of those tightly knit coteries scattered here and there the Harlem pianists, the Chicago school which through competition and imitation brought talent to such hothouse bloom in days gone by. Now players are more likely to emerge from a jazz course at some school of music, and, though all is not lost, homogenisation has crept in. That, however, was far from being true in the Thirties and Forties, and few biog- raphies reflect the crucial effect of geogra- phy in that era better than that of Teddy Edwards, the great tenor saxophonist who is at present on national tour. Edwards was born in Jackson, Mississippi on 26 April 1924. That is to say he comes from deep in blues territory — a wide swathe of South- ern and South-Western states extending from the Gulf Coast down into Texas and up to Kansas. This is admittedly a large locality — I imagine you could lose the British Isles in it several times — but still a musical neighbourhood. Consequently, Edwards plays the blues with an idiomatic rightness that is as rich and as natural as an authentic Irish brogue; and when he isn't playing blues, blues-feeling still gives spirit and savour to his music.

The Government has found your father, and his bloody dog.' He belongs to a great generation of saxophonists — many of whom came from the South and South-West. Saxophones had been pioneered in jazz, of course, as early as the Twenties. But it was in the Forties that the instrument — and particu- larly the tenor — attained the supremacy that it has held ever since. Marvellous tenor saxophonists swarmed in those days, too many, it seems, for all of them to be recorded properly and given the attention they deserved. But Edwards is unusual among his tenor-playing contemporaries for two reasons: firstly because he began as an altoist, and secondly because he had no particular influence.

The grounding in alto — a smaller, fleeter instrument — gave his music a nimbleness that can still be detected. 'When I switched to tenor in 1945, I found I could fly all over that horn,' he told me the other day. `After all these years I still think sometimes I'm an altoist at heart.' But the gravitas of the tenor has made it by far the more popular of the two, as Edwards acknowledges. It's the male voice, no doubt about that, it's a virile thing.'

Most of the other young tenors of the day — Wardell Gray, Dexter Gordon, Zoot Sims, Stan Getz — drew heavily on the musical language of Lester Young, the most inspired saxophonist to emerge in the Thirties. Edwards didn't, which left him free to develop his own musical voice. His tone is rounded and mellow, not lemony and dry, as Young's was. This, in combina- tion with his altoist's speed and an agile harmonic imagination derived from a thick book of music theory that rested on the piano back home in Jackson, placed him in the vanguard of Forties jazz. He has a good claim, of which he is justly proud, to have been the first to translate bebop (or mod- ern jazz) on to the tenor. Charlie Parker and Dizzy Gillespie, its inventors, were respectively an altoist and a trumpeter.

In any case, quite apart from his place in the history books, he is a magnificent performer. I caught him the other day in Cambridge, Cambs, with an English rhythm section — Mick Pyne on piano, Mark Taylor, drums, Andy Cleyndert, bass — the latter two of whom cannot be even half his age. But they loved playing with him, and he with them (I'd like to put them in my pocket and take them with me wherever I go'). He retains, in fact, all the gusto, the commanding sweep and confi- dent authority of his Forties heyday. And, a tall handsome man, soberly hip in choco- late shirt and yellow braces, he doesn't even look very different.

Edwards is quite as important a musi- cian, as, say, his friend and contemporary Dexter Gordon, who died earlier this year. And he is still playing at a creative peak, as Gordon had not been for at least a decade before his death. So why, you might ask, is Edwards's name not more familiar? The reason, strangely enough, is again geog- raphical. In those days New York was the place where jazz reputations were made (to some extent they still are). And Ed- wards never reached New York (he didn't even visit it until the 1960s). Instead he fetched up in Los Angeles. Plenty of important developments in jazz took place in California — but in the early days they tended to be overlooked. Edwards is genially philosophical about the neglect he has suffered. `I didn't get a lot of credit that I should have got, because all the writers were in New York and I'm out here. But the word got out finally, yeah, it all comes out in the end.'