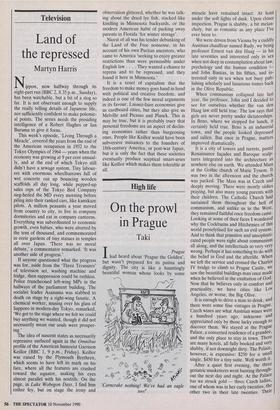 Land of the repressed

Nippon, now halfway through its eight-part run (BBC 2, 8.35 p.m., Sunday), has been watchable, but a bit of a slog so far. It is not observant enough to supply the really telling details of Japanese life, nor sufficiently confident to make polemic- al points. The series needs the presiding intelligence of a Robert Hughes or Ian Buruma to give it focus.

This week's episode, 'Living Through a Miracle', covered the years from the end of the American occupation in 1952 to the Tokyo Olympics of 1964 — years when the economy was growing at 9 per cent annual- ly, and at the end of which Tokyo still didn't have a sewage system. Tiny labour- ers with enormous wheelbarrows full of wet concrete ran up bouncing wooden scaffolds all day long, while pepped-up sales reps of the Tokyo Bed Company sieg-heiled the MD every morning before piling into their ranked cars, like kamikaze pilots. A million peasants a year moved from country to city, to live in company dormitories and eat in company canteens. Everything was subordinated to economic growth, even babies, who were aborted by the tens of thousand, and commemorated in eerie gardens of tiny statues in temples all over Japan. 'There was no moral debate,' a commentator remarked. 'It was another side of progress.'

If anyone questioned what the progress was for, aside from the 'Three Treasures' of television set, washing machine and fridge, then suppression could be ruthless. Police truncheoned left-wing MPs in the hallways of the parliament building. The socialist leader Asanuma was stabbed to death on stage by a right-wing fanatic. A chemical worker, musing over his glass of Sapporo in modern-day Tokyo, remarked, 'We got to the stage where we felt we could buy anything we wanted, though it did not necessarily mean our souls were prosper- ing.'

The idea of nascent states as necessarily repressive surfaced again in the Omnibus profile of the American humorist Garrison Keillor (BBC 1, 9 p.m., Friday). Keillor was raised by the Plymouth Brethren, which seems to have left its mark on his face, where all the features are crushed toward the equator, making his eyes almost parallel with his nostrils. On the page, in Lake Wobegon Days, I find him rather fey, but on stage the irony and observation glittered, whether he was talk- ing about the dried lye fish, stacked like kindling in Minnesota backyards, or the modern American habit of packing away parents in Florida 'for winter storage'.

Nicest of all was his tender debunking of the Land of the Free nonsense, in his account of his own Puritan ancestors, who came to America 'seeking to enjoy greater restrictions than were permissible under English law . . . . They wanted a chance to repress and to be repressed, and they found it here in Minnesota.'

It is a tenet of capitalism that the freedom to make money goes hand in hand with political and creative freedom, and indeed is one of the few moral arguments in its favour. Laissez-faire economies give us cardboard cities, but they also give us Melville and Picasso and Planck. This is may be true, but it is probably truer that personal freedoms are an aspect of declin- ing economies rather than burgeoning ones. People like Keillor would have been subversive nuisances to the founders of 18th-century America, or post-war Japan, but it is only the fact that these societies eventually produce sceptical smart-arses like Keillor which makes them tolerable at all.