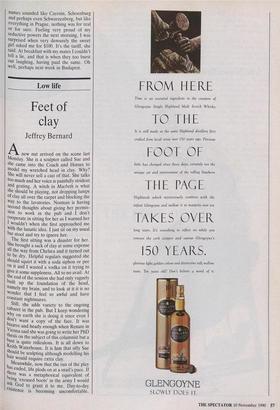 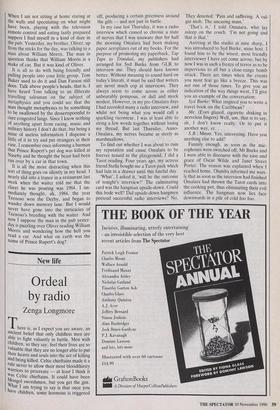 Monday. She is a sculptor called Sue and she came into the Coach and Horses to model my wretched head in clay. Why? She will never sell a cast of that. She talks too much and her voice is painfully strident and grating. A witch in Macbeth is what she should be playing, not dropping lumps of clay all over the carpet and blocking the way to the lavatories. Norman is having second thoughts about giving her permis- sion to work in the pub and I don't cooperate in sitting for her as I warned her I wouldn't when she first approached me with the lunatic idea. I just sit on my usual bar stool and try to ignore her. The first sitting was a disaster for her. She brought a sack of clay at some expense all the way from Chelsea and it turned out to be dry. Helpful regulars suggested she should squirt it with a soda siphon or pee 0.n it and I wasted a vodka on it trying to give it some suppleness. All to no avail. At the end of the session she had only vaguely built up the foundation of the head, namely my brain, and to look at it it is no wonder that I feel so awful and have Constant nightmares.

Still, she adds variety to the ongoing cabaret in the pub. But I keep wondering why on earth she is doing it since even I don't want a copy of the face. It was bizarre and heady enough when Renate in Vienna said she was going to write her PhD thesis on the subject of this columnist but a bust is quite ridiculous. It is all down to Keith Waterhouse. It is him that silly Sue should be sculpting although modelling his hair would require extra clay. Meanwhile, now that the run of the play has ended, life plods on at a snail's pace. If

there was a metaphorical equivalent of be 'excused boots' in the army I would ask God to grant it to me. Day-to-day existence is becoming uncomfortable.

When I am not sitting at home staring at the walls and speculating on what might have been, playing with the television remote control and eating lazily prepared suppers I find myself in a kind of daze in the pub. Yesterday, my brother, Oliver, up from the sticks for the day, was talking to a man about William Morris. The man in question thinks that William Morris is a make of car. But it was kind of Oliver.

It is all to do with being friendly and pulling people into your little group. Tom Baker used to do it and Dan Farson still does. Talk above people's heads, that is. I have heard Tom talking to an illiterate travelling salesman on the subject of metaphysics and you could see that the man thought metaphysics to be something to be swallowed by the dessertspoonful to cure congested lungs. Since I know nothing of anything apart from racing, music and military history I don't do that, but being a mine of useless information I dispense a little of it to try and put strangers at their ease. I remember once informing a barman that Prince Rupert's pet dog was killed at Naseby and he thought the beast had been run over by a car in that town.

It is all the more distracting when this sort of thing goes on silently in my head. I nearly slid into a trance in a restaurant last week when the waiter told me that the claret he was pouring was 1984. I im- mediately thought, ah, 1984, the year Teenoso won the Derby, and began to wander down memory lane. But I would never have gone into the intricacies of Teenoso's breeding with the waiter. And now I suppose the man in the pub yester- day is puzzling over Oliver reading William Morris and wondering how the hell you read a car. And what on earth was the name of Prince Rupert's dog?