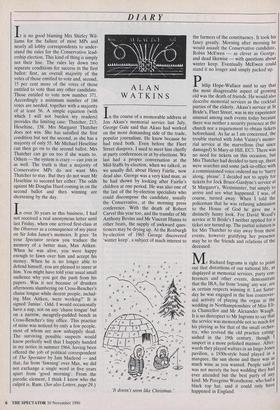 It is no good blaming Mrs Shirley Wil- liams for the failure of most MPs and nearly all lobby correspondents to under- stand the rules for the Conservative lead- ership election. This kind of thing is simply not their line. The rules lay down two separate conditions for success in the first ballot: first, an overall majority of the votes of those entitled to vote and, second, 15 per cent more of the votes of those entitled to vote than any other candidate. Those entitled to vote now number 371. Accordingly a minimum number of 186 votes are needed, together with a majority of at least 56. A simple equation (with which I will not burden my readers) provides the limiting case: Thatcher, 213; Heseltine, 158. Mrs Margaret Thatcher does not win. She has satisfied the first condition but not the second, as she has a majority of only 55. Mr Michael Heseltine can then go on to the second ballot. Mrs Thatcher can go on too if she wants to. Others — the system is crazy — can join in as well. The truth is that a majority of Conservative MPs do not want Mrs Thatcher to stay. But they do not want Mr Heseltine to succeed her either. The odds against Mr Douglas Hurd coming in on the second ballot and then winning are shortening by the day.

In over 30 years in this business, I had not received a real anonymous letter until last Friday, when one arrived first-class at the Observer as a consequence of my piece on Sir John Junor's memoirs. It goes: In your Spectator review you traduce the memory of a better man, Max Aitken. When he was alive, you were happy enough to fawn over him and accept his money. When he is no longer able to defend himself, you are pleased to sneer at him. You might have told your usual small audience why you got the push from his papers. Was it not because of drunken afternoons slumbering on Cross-Bencher's chaise longue while decent people, includ- ing Max Aitken, were working?' It is signed `Junius'. Odd. I would occasionally have a nap, not on any 'chaise longue' but on a narrow, meagrely-padded bench in Cross-Bencher's tiny office. This practice of mine was noticed by only a few people, most of whom are now unhappily dead. The surviving possible suspects would know perfectly well that I happily handed in my notice in summer 1964, having been offered the job of political correspondent of The Spectator by lain Macleod — and that, far from 'fawning' over Max, we did not exchange a single word in five years apart from 'good morning'. From the parodic element, I think I know who the culprit is. Rum. (See also Letters, page 29.) In the course of a memorable address at Jon Akass's memorial service last July, George Gale said that Akass had worked on the more demanding side of the trade, popular journalism. He knew because he had tried both. Even before the Fleet Street diaspora, I used to meet him chiefly at party conferences or at by-elections. We last had a proper conversation at the Mid-Staffs by-election, when we talked, as we usually did, about Henry Fairlie, now dead also. George was a very kind man, as he had shown by looking after Fairlie's children at one period. He was also one of the last of the by-election specialists who could discompose the candidate, usually the Conservative, at the morning press conference. With the death of Robert Carvel this year too, and the transfer of Mr Anthony Bevins and Mr Vincent Hanna to other beats, the supply of awkward ques- tioners may be drying up. At the Roxburgh by-election of 1965 George discovered `winter keep', a subject of much interest to 'It doesn't seem like Christmas.' the farmers of the constituency. It took his fancy greatly. Morning after morning he would assault the Conservative candidate, Robin McEwen — as clever as George, and dead likewise — with questions about winter keep. Eventually McEwen could stand it no longer and simply packed up.

Philip Hope-Wallace used to say that the most disagreeable aspect of growing old was the death of friends. He would also describe memorial services as the cocktail parties of the elderly. Akass's service at St Bride's, Fleet Street, was in my experience unusual among such events today because there was neither a security presence at the church nor a requriement to obtain tickets beforehand. As far as I am concerned, the trouble started with John Vaizey's memo- rial service at the marvellous (but since damaged) St Mary-at-Hill, EC3. There was no need for tickets on this occasion, but Mrs Thatcher had decided to turn up, there were searches and some jack-in-office with a commissioned voice ordered me to 'hurry along, please'. I decided not to apply for tickets for Jock Bruce-Gardyne's service at St Margaret's, Westminster, but simply to arrive and see what happened. I was, of course, turned away. When I told the policeman that he was refusing admission to the House of God he gave me a distinctly funny look. For David Wood's service at St Bride's I neither applied for a ticket nor turned up. The partial solution is for Mrs Thatcher to stay away from these events, however gratifying her presence may be to the friends and relations of the deceased.

Mr Richard Ingrams is right to point out that distortions of our national life, as displayed at memorial services, party con- ferences and other events, demonstrate that the IRA, far from `losing' any war, are in certain respects winning it. Last Satur- day he was engaged in the less controver- sial activity of playing the organ at the wedding in Northamptonshire of Miss Eli- za Chancellor and Mr Alexander Waugh. It is no disrespect to Mr Ingrams to say that the service was memorable not so much for his playing as for that of the small orches- tra, who revived the old practice exting- uished in the 19th century, though I suspect in a more polished manner. After- wards they played waltzes in an Inigo Jones pavilion, a 1930s-style band played in a marquee, the sun shone and there was as i much wine as you wanted. People said it was not merely the best wedding they had ever attended but the best party of any kind. Mr Peregrine Worsthorne, who had a black top hat, said it could only have happened in England.