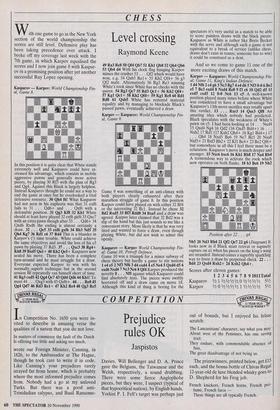 With one game to go in the New York section of the world championship the scores are still level. Defensive play has been taking precedence over attack. I broke off my coverage last week with the 7th game, in which Karpov equalised the scores and I now join game 8 with Kaspar- ov in a promising position after yet another successful Ruy Lopez opening.

Game 9 was something of an anti-climax with both players clearly exhausted after their marathon struggle of game 8. In this position Karpov could have played on with either 32 Bf4 or the interesting 32 Bel. Instead he chose 32 Bd2 RxdS 33 Bf3 RddS 34 BxaS and a draw was agreed. Karpov later claimed that 32 Bd2 was a slip of the hand but this just sounds to me like a convenient story. More likely is that he was very tired and wanted to force a draw, even though playing White, but did not wish to admit this openly.

Kasparov — Karpov World Championship Fin- al: Game 10, Petroff Defence. Game 10 was a triumph for a minor subway of chess theory but hardly a game to stir nations 1 e4 e5 2 Nf3 Nf6 3 d4 exd4 4 e5 Ne4 5 Qxd4 d5 6 exd6 Nxd6 7 Nc3 Nc6 8 Qf4 Karpov produced the novelty 8 S. . . Nf5 against which Kasparov could find absolutely zero. The pieces were swiftly hoovered off and a draw came on move 18. Although this kind of thing is boring for the

spectators it's very useful in a match to be able to score painless draws with the black pieces. Kasparov as White is rather like Boris Becker with the serve and although such a game is not equivalent to a break of service (unlike chess, draws don't exist in tennis; someone has to win) it could be construed as a dent.

And so we come to game 11 one of the more exciting draws of this match.