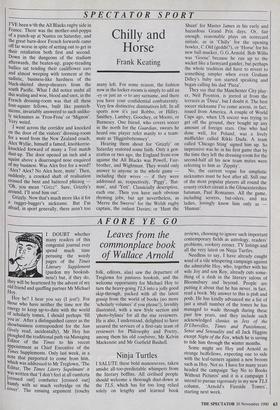 I'VE been IA ith the All Blacks rugby side in France. There was the mother-and-poppa of a punch-up at Nantes on Saturday, and the great barn-door French forwards came off far worse in spite of setting out to get in their retaliation both first and second. Down in the dungeons of the stadium afterwards, the beaten-up, grape-treading bullies sat tending their cauliflower ears and almost weeping with torment at the sadistic, business-like hardness of the black-shirted sheep-shearers from the south Pacific. What I did notice midst all this wailing and woe, blood and snot, in the French dressing-room was that all these four-square fellows, built like pantech- nicons, invariably answered to such unlike- ly nicknames as 'Frou-Frou' or 'Mignon'. Very weird.

I went across the corridor and knocked on the door of the visitors' dressing-room for a word from the New Zealand coach, Alex Wyllie, himself a famed, knobkerrie- knuckled forward of many a Test match dust-up. The door opened an inch and a squint above a disarranged nose enquired of my business. Was Alex free for a word? `Alex? Alex? No Alex here, mate'. Then, suddenly, a crooked shaft of realisation crossed the bent and battered phizzog Oh, you mean "Grizz". Sure, Grizzly's around, I'll send him out'.

Grizzly. Now that's much more like it for a rugger-bugger's nickname. But I'm afraid, in sport generally, there aren't too many left. For some reason, the fashion now in the locker-rooms is simply to add an -ey or just an -o to any surname, and there you have your confidential confraternity. Very few distinctive diminutives left. In all sports now it's just Robbo, or Hilley, Smithey, Lambey, Goochey, or Mooro, or Barnesey. One friend, who covers soccer in the north for the Guardian, swears he heard one player refer matily to a team- mate as 'Higginbottomsey'. Hearing them shout for 'Grizzly' on Saturday restored some faith. Only a gen- eration or two ago, the England front-row against the All Blacks was Powell, Fair- brother, and Wightman. They would only answer to anyone in the whole game including their wives — if they were addressed as, respectively, 'Piggy', 'Bat- man', and 'Yeti'. Classicially descriptive, each one. Then you have such obvious rhyming jobs, but apt nevertheless, as `Merve the Swerve' for the Welsh rugby captain, the onliest Davies; or 'Hunt the Shunt' for Master James in his early and hazardous Grand Prix days. Or, fair enough, reasonable plays on scorecard initials, as in 'Chilly' for the opening bowler, C.Old (geddit?), or 'Horse' for his new ball mucker, G.G.Arnold. Bob Willis was 'Goose' because he ran up to the wicket like a farmyard gander, but perhaps the whole tradition did have to revert to something simpler when even Graham Dilley's baby son started speaking and began calling his dad 'Picca'.

They say that the Manchester City play- er, Neil Poynton, is jeered at from the terraces as Dissa', but I doubt it. The best soccer nickname I've come across, in fact, issued from America. A couple of World Cups ago, when US soccer was trying to get off the ground, they bought up any amount of foreign stars. One who had done well, for Poland, was a lively midfielder called Rikki Duda. A team called 'Chicago Sting' signed him up. So impressive was he in his first game that by the time they left the dressing-room for the second-half all his new team mates were referring to him as 'Zippity'.

No, the current vogue for simplistic nicknames must be best after all. Still one of the most popular players all round the county cricket circuit is the Gloucestershire batsman, Paul Romaines. All the game, including scorers, bat-oilers, and tea ladies, lovingly know him only as 'Human'.