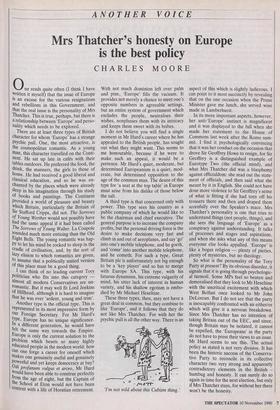 Mrs Thatcher's honesty on Europe is the best policy

0 ne reads quite often (I think I have Written it myself) that the issue of Europe is an excuse for the various resignations and rebellions in this Government, and that the real issue is the personality of Mrs Thatcher. This is true, perhaps, but there is a relationship between 'Europe' and perso- nality which needs to be explored. There are at least three types of British character for whom 'Europe' has a strange psychic pull. One, the most attractive, is the cosmopolitan romantic. As a young man, this character travelled on the Conti- nent. He sat up late in cafés with their tables outdoors. He preferred the food, the drink, the manners, the girls to those of home. He had received a good liberal and classical education, and so he was en- chanted by the places which were already deep in his imagination through his study of books and paintings. The Continent Provided a world of pleasure and beauty which Britain, particularly the Britain of Sir Stafford Cripps, did not. The Sorrows of Young Werther would not possibly have had the same appeal if it had been called The Sorrows of Young Walter. La Coupole sounded much more enticing than the Old Eight Bells. The young romantic was hap- py to let his mind be rocked to sleep in the cradle of civilisation, and, by the sort of lazy elision to which romantics are given, to assume that a politically united version of this place must be a good thing. I can think of no leading current Tory politician who fits into this category — almost all modern Conservatives are un- romantic. But it may well fit Lord Jenkins of Hillhead, although it is hard to imagine that he was ever 'ardent, young and trim'. Another type is the official type. This is represented in its most impressive form by our Foreign Secretary. For Mr Hurd's tYPe, Europe has no unique significance. In a different generation, he would have felt the same way towards the Empire. Europe is only the current solution to the problem which besets so many highly educated people in the modern world: how can one forge a career for oneself which makes one genuinely useful and genuinely Powerful and yet keeps democracy at bay? Odi profanum vulgus et arceo, Mr Hurd Would have been able to construe perfectly from the age of eight, but the Captain of the School at Eton would not have been content with a life of Horatian retirement. With not much dominion left over palm and pine, 'Europe' fills the vacuum. It provides not merely a chance to meet one's opposite numbers in agreeable settings, but an entire system of government which excludes the people, neutralises their wishes, nonplusses them with its intricacy and keeps them sweet with its bribes. I do not believe you will find a single moment in Mr Hurd's career where he has appealed to the British people, has sought out what they might want. This seems to me honourable, because if he were to make such an appeal, it would be a pretence. Mr Hurd's quiet, moderate, but determined Europeanism is a quiet, mod- erate, but determined opposition to the age of the common man. The desire of this type for 'a seat at the top table' in Europe must arise from his dislike of those below the salt.

A third type is that concerned only with power. This type sees his country as a public company of which he would like to be the chairman and chief executive. The general purpose is to increase the company profits, but the personal driving force is the desire to make decisions very fast and climb in and out of aeroplanes, and say `go' into one's mobile telephone, and he goeth, and 'come' into another mobile telephone, and he cometh. For such a type, Great Britain plc is unfortunately not big enough . to be a 'key player' and so has to merge with Europe SA. This type, with his fatuous dynamism, his extreme vulgarity of mind, his utter lack of interest in human variety, and his shallow egotism is embo- died by Mr Michael Heseltine.

These three types, then, may not have a great deal in common, but they combine to like 'Europe', and it follows that they do not like Mrs Thatcher. For with her the psychic pull is all the other way. There is an

aspect of this which is slightly ludicrous. I can point to it most succinctly by revealing that on the one occasion when the Prime Minister gave me lunch, she served wine made in Lamberhurst.

In its more important aspects, however, her anti-'Europe' instinct is magnificent and it was displayed to the full when she made her statement to the House of Commons last week after the Rome sum- mit. I find it psychologically convincing that it was her conduct on the occasion that drove Sir Geoffrey Howe to resign, for Sir Geoffrey is a distinguished example of Eurotype Two (the official mind), and what Mrs Thatcher did was a blasphemy against officialdom: she read out the state- ment of officials, and then said what she meant by it in English. She could not have done more violence to Sir Geoffrey's sense of what is fitting if she had torn off his trousers there and then and draped them scornfully over the Speaker's mace. Mrs Thatcher's personality is one that tries to understand things (not people, things), and she sees the language of 'Europe' as a conspiracy against understanding. It talks of processes and stages and aspirations, and when she asks what any of this means everyone else looks appalled. 'Europe' is like a bogus religion — plenty of pieties, plenty of mysteries, but no theology.

So what is the personality of the Tory Party at present? By its obvious disorder, it signals that it is going through psychologic- al turmoil. Some MPs feel so beaten and demoralised that they look to Mr Heseltine with the uncritical excitement with which West Belfast once looked to Mr John DeLorean. But I do not see that the party is inescapably confronted with an either/or which will give it a nervous breakdown. Since Mrs Thatcher has no intention of taking Britain out of the EEC, and since, though Britain may be isolated, it cannot be expelled, the 'Europeans' in the party do not have to press their views to an issue.

Mr Hurd seems to see this. The actual policy as stated is not very divisive. It has been the historic success of the Conserva- tive Party to reconcile in its collective character two very strong and apparently contradictory elements in the British - humbug and honesty. It can surely do so again in time for the next election, but only if Mrs Thatcher stays, for without her there won't be the honesty.