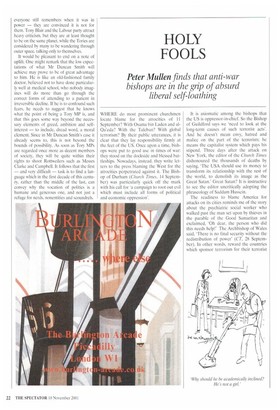 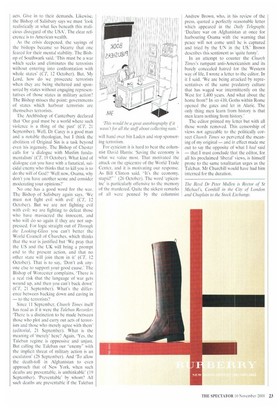 bishops are in the grip of absurd liberal self-loathing

WHERE do most prominent churchmen locate blame for the atrocities of 11 September? With Osama bin Laden and alQa'eda? With the Taleban? With global terrorism? By their public utterances, it is clear that they lay responsibility firmly at the feet of the US. Once upon a time, bishops were put to good use in times of war: they stood on the dockside and blessed battleships. Nowadays, instead, they write letters to the press blaming the West for the atrocities perpetrated against it. The Bishop of Durham (Church Times, 14 September) was particularly quick off the mark with his call for 'a campaign to root out evil which must include all forms of political and economic oppression'.

It is axiomatic among the bishops that the US is oppressor-in-chief. So the Bishop of Guildford says we 'need to look at the long-term causes of such terrorist acts'. And he doesn't mean envy, hatred and malice on the part of the terrorists; he means the capitalist system which pays his stipend. Three days after the attack on New York, the editor of the Church Times dishonoured the thousands of deaths by saying, The USA should use its money to transform its relationship with the rest of the world, to demolish its image as the Great Satan.' Great Satan? It is instructive to see the editor uncritically adopting the phraseology of Saddam Hussein.

The readiness to blame America for attacks on its cities reminds me of the story about the psychiatric social worker who walked past the man set upon by thieves in the parable of the Good Samaritan and exclaimed, 'Oh dear, the person who did this needs help!' The Archbishop of Wales said. 'There is no final security without the redistribution of power' (CT, 28 September). In other words, reward the countries which sponsor terrorism for their terrorist acts. Give in to their demands. Likewise, the Bishop of Salisbury says we must 'look realistically at what lies beneath this malicious disregard of the USA'. The clear reference is to American wealth.

As the crisis deepened, the sayings of the bishops became so bizarre that one feared for their mental stability. The Bishop of Southwark said. This must be a war which seeks and eliminates the terrorists without entering into confrontation with whole states' (CT, 12 October). But, My Lord, how do we prosecute terrorists when they are being sheltered and sponsored by states without engaging representatives of those states in military action? The Bishop misses the point: governments of states which harbour terrorists are themselves terrorists.

The Archbishop of Canterbury declared that 'Our goal must be a world where such violence is a thing of the past' (CT, 21 September). Well, Dr Carey is a good man and a notable theologian, but I think the abolition of Original Sin is a task beyond even his ingenuity. The Bishop of Chester calls for 'a dialogue with Muslim fundamentalism' (CT, 19 October). What kind of dialogue can you have with a fanatical, suicidal enemy who thinks that to kill you is to do the will of God? Well now, Osama, why don't you have another scone and consider moderating your opinions?'

No one has a good word for the war. The Bishop of Salisbury again says, 'We must not fight evil with evil' (CT, 12 October). But we are not fighting evil with evil: we are fighting to defeat those who have massacred the innocent, and who will do so again if they are not suppressed. For logic straight out of Through the Looking-Glass you can't better the World Council of Churches, which thinks that the war is justified but We pray that the US and the UK will bring a prompt end to the present action, and that no other state will join them in it' (CT. 12 October). That is to say, 'Don't ask anyone else to support your good cause.' The Bishop of Worcester complains, 'There is a real risk that the language of war gets wound up. and then you can't back down' (CT, 21 September). What's the difference between backing down and caving in — to the terrorists?

Since 11 September, Church Times itself has read as if it were the Taleban Recorder: 'There is a distinction to be made between those who plot and carry out acts of terrorism and those who merely agree with them' (editorial, 21 September). What is the meaning of 'merely' here? Again, 'Yes, the Taleban regime is oppressive and unjust. But calling the Taleban our "enemy" with the implicit threat of military action is an escalation' (28 September). And 'To allow the death-toll in Afghanistan to even approach that of New York, when such deaths are preventable, is unthinkable' (19 September). 'Preventable' by whom? All such deaths are preventable if the Taleban will hand over bin Laden and stop sponsoring terrorism.

For cynicism it is hard to beat the columnist David Harris: 'Saving the economy is what we value most. That motivated the attack on the epicentre of the World Trade Center, and it is motivating our response. As Bill Clinton said, "It's the economy, stupid!"' (26 October). The word 'epicentre' is particularly offensive to the memory of the murdered. Quite the sickest remarks of all were penned by the columnist

Andrew Brown, who, in his review of the press, quoted a perfectly reasonable letter which appeared in the Daily Telegraph: 'Declare war on Afghanistan at once for harbouring Osama with the warning that peace will not come until he is captured and tried by the UN in the US.' Brown describes this sentiment as 'quite funny'.

In an attempt to counter the Church Times's rampant anti-Americanism and its barely concealed hatred for the Western way of life, I wrote a letter to the editor. In it I said. 'We are being attacked by representatives of the same predatory culture that has waged war intermittently on the West for 1,400 years. And what about the home front? In AD 410, Goths within Rome opened the gates and let in Alaric. The only thing men learn from history is that men learn nothing from history.'

The editor printed my letter but with all those words removed. This censorship of views not agreeable to the politically correct Church Times so perverted the meaning of my original — and in effect made me out to say the opposite of what I had said — that I must conclude that the editor, for all his proclaimed 'liberal' views, is himself prone to the same totalitarian urges as the Taleban. Mr Churchill would have had him interned for the duration.

The Revel Dr Peter Mullen is Rector of St Michael, Comhill in the City of London and Chaplain to the Stock Exchange.