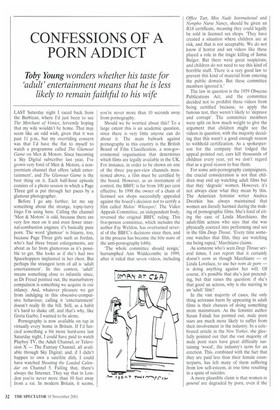 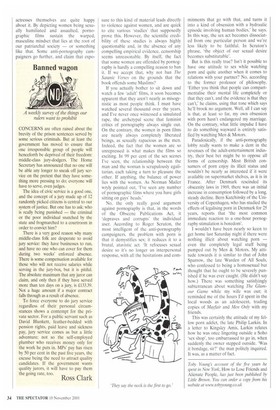 Toby Young wonders whether his taste for

LAST Saturday night I raced back from the Barbican, where I'd just been to see The Merchant of Venice, fervently hoping that my wife wouldn't be home. That may seem like an odd wish, given that it was past 11 p.m., but my overriding concern was that I'd have the flat to myself to watch a programme called The Glamour Game on Men & Motors. Since becoming a Sky Digital subscriber last year, I've grown very fond of Men & Motors, a nonpremium channel that offers 'adult entertainment', and The Glamour Game is the best thing on it. Each half-hour episode consists of a photo session in which a Page Three girl is put through her paces by a glamour photographer.

Before I go any further, let me say something about the strange, topsy-turvy lingo I'm using here. Calling the channel 'Men & Motors' is odd, because there are very few men on it and even fewer internal-combustion engines; it's basically pure porn. The word 'glamour' is bizarre, too, because Page Three girls such as Jordan, who's had three breast enlargements, are about as far from glamorous as it's possible to get. She looks as if she's had two Spacehoppers implanted in her chest. But perhaps the strangest term of all is 'adult entertainment'. In this context, 'adult' means something close to infantile since, as Dr Freud pointed out, the masturbatory compulsion is something we acquire in our infancy. And, whatever pleasure we get from indulging in this obsessive-compulsive behaviour, calling it 'entertainment' doesn't really fit the bill. Still, as a habit it's hard to shake off, and that's why, like Greta Garbo, I wanted to be alone.

Pornography is now available on tap in virtually every home in Britain. If I'd fancied something a bit more hard-core last Saturday night, I could have paid to watch Playboy TV, the Adult Channel, or Television X — The Fantasy Channel, all available through Sky Digital; and, if I didn't happen to own a satellite dish, I could have watched Shooting the Loaded Calendar on Channel 5. Failing that, there's always the Internet. They say that in London you're never more than 10 feet away from a rat. In modern Britain, it seems,

you're never more than 10 seconds away from pornography.

Should we be worried about this? To a large extent this is an academic question, since there is very little anyone can do about it. The main bulwark against pornography in this country is the British Board of Film Classification, a non-governmental organisation that determines which films are legally available in the UK. For instance, in order to be shown on one of the three pay-per-view channels mentioned above, a film must be certified by the board. However, as an instrument of control, the BBFC is far from 100 per cent effective. In 1998 the owner of a chain of licensed sex shops successfully appealed against the board's decision not to certify a film called Makin' Whoopee!. The Video Appeals Committee, an independent body, reversed the original BBFC ruling. This five-person committee, which includes the author Fay Weldon, has overturned several of the BBFC's decisions since then, and in the process has become the bete noire of the anti-pornography lobby.

'The whole committee should resign,' harrumphed Ann Widdecombe in 1999, after it ruled that seven videos, including

Office Tart, Miss Nude International and Nympho Nurse Nancy, should be given an R18 certificate, meaning they could legally be sold in licensed sex shops. 'They have created a situation where children are at risk, and that is not acceptable. We do not know if horror and sex videos like these played a role in the tragic killing of Jamie Bulger. But there were great suspicions, and children do not need to see this kind of horrible stuff. There is a very good law to prevent this kind of material from entering the public domain. But these committee members ignored it.'

The law in question is the 1959 Obscene Publications Act, and the committee decided not to prohibit these videos from being certified because, to apply the famous test, they weren't likely to 'deprave and corrupt'. The committee members were split on how much weight to give the argument that children might see the videos in question, with the majority deciding that this wasn't a good enough reason to withhold certification. As a spokesperson for the company that lodged the appeal pointed out, cars kill thousands of children every year, yet we don't regard that as a good reason to ban them.

For some anti-pornography campaigners, the crucial consideration is not that children may end up watching adult films but that they 'degrade' women, However, it's not always clear what they mean by this. The American feminist writer Andrea Dworkin has always maintained that women are literally harmed during the making of pornographic films. She's fond of citing the case of Linda Marchiano, the adult-film actress who says that she was physically coerced into performing oral sex in the film Deep Throat. 'Every time someone watches that film, they are watching me being raped,' Marchiano claims.

actresses themselves are quite happy about it. By depicting women being sexually humiliated and assaulted, pornographic films sustain the warped, masculine mindset that lies at the root of our patriarchal society — or something like that. Some anti-pornography campaigners go further, and claim that expo sure to this kind of material leads directly to violence against women, and are quick to cite various 'studies' that supposedly prove this. However, the scientific credibility of these studies is always highly questionable and, in the absence of any compelling empirical evidence, censorship seems unreasonable. By itself, the fact that some women are offended by pornography is hardly a compelling reason to ban it. If we accept that, why not ban The Satanic Verses on the grounds that the book offends some Muslims?

If you actually bother to sit down and watch a few 'adult' films, it soon becomes apparent that they aren't nearly as misogynistic as most people think. I must have watched several thousand over the years, and I've never once witnessed a simulated rape, the archetypal scene that feminist critics of pornography always single out. On the contrary, the women in porn films are nearly always completely liberated beings, as sexually rapacious as the men. Indeed, the fact that the women are so unrepressed is what makes the films so exciting. In 99 per cent of the sex scenes I've seen, the relationship between the man and the woman is scrupulously egalitarian, each taking a turn to pleasure the other. If anything, the balance of power lies with the women. As Norman Mailer wryly pointed out, 'I've seen any number of pornographic films where you have girls sitting on guys' heads.'

No, the only really good argument against pornography is that, in the words of the Obscene Publications Act, it 'depraves and corrupts' the individual user. According to Roger Scruton, the most intelligent of the anti-pornography campaigners, the problem with porn is that it demystifies sex; it reduces it to a brutal, atavistic act. 'It refocuses sexual desire so it's no longer an interpersonal response, with all the hesitations and com mitments that go with that, and turns it into a kind of obsession with a hydraulic episode involving human bodies,' he says. In this way, the sex act becomes dissociated from one particular person and we're less likely to be faithful, In Sermon's phrase, 'the object of our sexual desire becomes substitutable'.

I wouldn't have been nearly so keen to get home last Saturday night if there were nothing illicit about watching porn — even the completely legal stuff being pumped out by Men & Motors. My attitude towards it is similar to that of John Sparrow, the late Warden of All Souls, who confessed to being a homosexual but thought that he ought to be severely punished if he was ever caught. (He didn't say how.) There was something satisfyingly subterranean about watching The Glamour Game while my wife was out; it reminded me of the hours I'd spent in the local woods as an adolescent, trading copies of Mayfair and Men Only with my friends.

Toby Young's account of the five years he spent in New York, How to Lose Friends and Alienate People, has just been published by Little Brown. You can order a copy from his webs ite at www.tobyyoung.co.uk