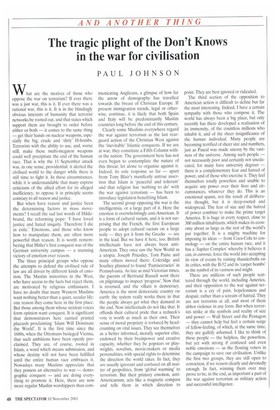 Page 50, 10 November 2001 — The tragic plight of the Don't Knows in the war for civilisation
Close

PAUL JOHNSON What are the motives of those who oppose the war on terrorism? If ever there was a just war, this is it. If ever there was a rational war, this is it. It is in the blindingly obvious interests of humanity that terrorist networks be rooted out, and that states which support them are brought to order before either or both — it comes to the same thing — get their hands on nuclear weapons, especially the big, crude and 'dirty' H-bombs. Terrorists with the ability to use, and, worse still, make these multi-megaton weapons could well precipitate the end of the human race. That is why the 11 September attack was, in one sense, providential: it alerted the civilised world to the danger while there is still time to fight it. In these circumstances, while it is understandable that many express criticisms of the allied effort for its alleged inefficiency, to oppose it in principle seems contrary to all reason and justice.

But when have reason and justice been the determining factors in mass movements? I recall the sad last words of Hildebrand, the reforming pope: 'I have loved justice and hated iniquity. Therefore I die in exile.' Emotions, and those who know how to manipulate them, are often more powerful than reason. It is worth remembering that Hitler's first conquest was of the German university campus — a stunning victory of emotion over reason.

The three principal groups who oppose the attempts to defend the civilised rule of law are all driven by different kinds of emotion. The Muslim minorities in the West, who have access to the facts but reject them, are motivated by religious enthusiasm. I have no doubt that many Western Muslims want nothing better than a quiet, secular life: one reason they come here in the first place. But those among them whose strident voices form opinion want conquest. It is significant that demonstrators here carried printed placards proclaiming 'Islam Will Dominate the World'. It is the first time since the 1680s, when the Ottomans besieged Vienna, that such ambitions have been openly proclaimed. They are, of course, rooted in Islam, a word which means submission, and whose destiny will not have been fulfilled until the entire human race embraces it. Nowadays many Muslims appreciate that they possess an alternative to war — demographic conquest — and are doing everything to promote it. Here, there are now more regular Muslim worshippers than corn

municating Anglicans, a glimpse of how far the arrow of demography has travelled towards the breast of Christian Europe. If present immigration trends, legal or otherwise, continue, it is likely that both Spain and Italy will be predominantly Muslim countries long before the end of this century.

Clearly some Muslims everywhere regard the war against terrorism as the last rearguard action of the Christian West against the 'inevitable' Islamic conquests. If we are at war, they constitute a Fifth Column within the nation. The government here has not even begun to contemplate the nature of this threat, let alone to organise against it. Indeed, its sole response so far — apart from Tony Blair's manifestly untrue assertion that Islam is 'peaceful and tolerant' and that religion has `nothing to do' with the war against terrorism — has been to introduce legislation benefiting Islam.

The second group opposing the war is the intelligentsia, or a large part of it. Here the emotion is overwhelmingly anti-American. It is a form of cultural racism, and it is not surprising that the French, the first European people to adopt cultural racism on a large scale — they got it from the Greeks — are in the lead. But we have it here, too. British intellectuals have not always been antiAmerican. They once saw the New World as a utopia. Joseph Priestley, Tom Paine and many others moved there; Coleridge and Southey planned to found 'Pantisocracies' in Pennsylvania. As late as mid-Victorian times, the parents of Bertrand Russell went there on pilgrimage to inspect 'progress'. Now that is reversed, and the villain is democracy. America is the most democratic country on earth: the system really works there in that the people always get what they demand in the end. Now intellectuals do not like that. It offends their cultural pride that a redneck's vote is worth as much as their own. Their sense of moral propriety is tortured by headcounting on vital issues. They see themselves as a better informed, morally superior elite, endowed by their brainpower and creative capacity, whether they be popstars or playwrights, novelists, movie-makers or media personalities, with special rights to determine the direction the world takes. In fact, they are usually ignorant and confused on all matter of geopolitics, from 'global warming' to terrorism. But their primary emotion, antiAmericanism, acts like a magnetic compass and tells them in which direction to point. They are best ignored or ridiculed.

The third section of the opposition to American action is difficult to define but far the most interesting. Indeed, I have a certain sympathy with those who compose it. The world has always been a big place, but only recently has there developed a realisation of its immensity, of the countless millions who inhabit it, and of the sheer insignificance of the human individual. Many people are becoming terrified of sheer size and numbers, just as Pascal was made uneasy by the vastness of the universe. Among such people — not necessarily poor and certainly not uneducated, for many have university degrees — there is a complementary fear and hatred of power, and of those who exercise it. They feel themselves totally powerless and unable to acquire any power over their lives and circumstances, whatever they do. This is an emotional spasm, not the result of deliberative thought, but it is deep-rooted and widespread. The fear of size and the hatred of power combine to make the prime target America. It is huge in every respect, close to 300 million inhabitants, which makes its economy about as large as the rest of the world's put together. It is a mighty machine for imposing its ideas — from Coca-Cola to cosmology — on the entire human race, and it has a 'Jupiter Complex' whereby it believes it can, in extremis, force the world into accepting its view of events by raining thunderbolts on its critics, with the B-52 and its 'carpet bombs' as the symbol of its vastness and might.

There are millions of such people scattered through the world, including America, and their opposition to the war against terrorism is a cry of pain, hopelessness and despair, rather than a scream of hatred. They are not terrorists at all, and most of them abhor violence in any form. But when terrorists strike at the symbols and reality of size and power — Wall Street and the Pentagon — they cannot help but feel a certain surge of fellow-feeling, of which, at the same time, they are guiltily ashamed. I like to think of these people — the helpless, the powerless, but yet with strong if confused and even noble emotions — as the floating voters in the campaign to save our civilisation. Unlike the first two groups, they are still open to conviction, if we reason clearly and devotedly enough. In fact, winning them over may prove to be, in the end, as important a part of the war against terrorism as military action and successful intelligence.