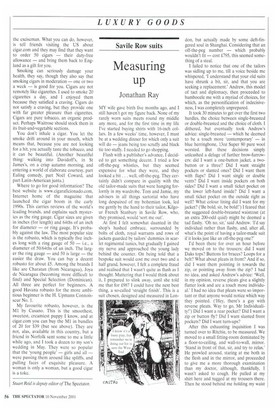 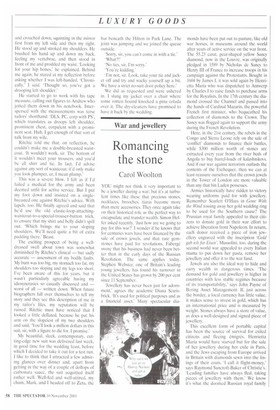 MY wife gave birth five months ago, and I still haven't got my figure back. None of my rarely worn suits meets round my middle any more, and for the first time in my life I've started buying shirts with 16-inch collars. In a few weeks' time, however, I must be at a wedding dinner for which only a suit will do — jeans being too scruffy and black tie too stuffy. I needed to go shopping.

Flush with a publisher's advance, I decided to get something decent. I tried a few off-the-peg whistles, but they seemed expensive for what they were, and they looked a bit . . . well, off-the-peg. They certainly didn't compare in quality with the old tailor-made suits that were hanging forlornly in my wardrobe, Tom and Jamie, my advisers in all things sartorial who have long despaired of my bohemian look, led me gently by the hand to their tailor, Kilgour French Stanbury in Savile Row, who, they promised, would 'sort me out'.

At first I felt somewhat daunted in the shop's hushed embrace, surrounded by bolts of cloth, royal warrants and rows of jackets guarded by tailors' dummies in scarlet regimental tunics, but gradually I gained my nerve and approached the young lady behind the counter. On being told that a bespoke suit would cost me over two and a half grand, however, I felt a complete fraud and realised that I wasn't quite as flush as I thought. Muttering that I would think about it, I prepared to slink away, until she told me that for £987 I could have the next best thing, a so-called 'straight finish'. This is a suit chosen, designed and measured in Lon don, but actually made by some deft-fingered soul in Shanghai. Considering that an off-the-peg number — which probably wouldn't fit — cost £795, this seemed something of a steal.

I failed to notice that one of the tailors was sidling up to me, till a voice beside me whispered, 'I understand that your old suits have shrunk a bit, sir, and that you are seeking a replacement.' Andrew, this model of tact and diplomacy, then proceeded to bamboozle me with a myriad of choices, for which, as the personification of indecisiveness, I was completely unprepared.

It took 30 minutes to get over the first two hurdles, the choice between single-breasted or double-breasted and the choice of cloth. I dithered, but eventually took Andrew's advice: single-breasted — which he deemed to be a touch more 'contemporary' — in blue herringbone, 13oz Super 80 pure wool worsted. But these decisions simply unleashed a deluge of further brow-furrowers: did I want a one-button jacket, a twobutton or a three? Did I want straight pockets or slanted ones? Did I want them with flaps? Did I want single or double vents? Did I want inside pockets on both sides? Did I want a small ticket pocket on the lower left-hand inside? Did I want a small ticket pocket on the outside right as well? What colour lining did I want for my jacket? ('Be bold, sir, be bole) I feared that the suggested double-breasted waistcoat (at an extra 200-odd quid) might be deemed a tad flashy. 'Oh no, sir,' said Andrew. -I'd say individual rather than flashy, and, after all, what's the point of having a tailor-made suit if it looks just like an off-the-peg one?'

I'd been there for over an hour before we moved on to the trousers: did I want Daks tops? Buttons for braces? Loops for a belt? What about pleats in front? And if so, did I want them pointing in towards the zip, or pointing away from the zip? I had no idea, and asked Andrew's advice: 'Well, in my opinion, reverse pleats give a slightly flatter look and are a touch more individual.' I had no idea that pleats were so important or that anyone would notice which way they pointed. ('Hey, there's a guy with reverse pleats. Way to go, Mr Individuality!') Did I want a rear pocket? Did I want a zip or button fly? Did I want slanted front pockets? Did I want turn-ups?

After this exhausting inquisition I was turned over to Ritchie, to be measured. We moved to a small fitting-room dominated by a floor-to-ceiling, and wall-to-wall, mirror. 'Stand in front of that, sir, and try to relax.' He prowled around, staring at me both in the flesh and in the mirror, and proceeded to give me a more thorough examination than my doctor, although, thankfully, I wasn't asked to cough. He pulled at my shirt here and tugged at my trousers there. Then be stood behind me holding my waist and crouched down, squinting in the mirror first from my left side and then my right. He stood up and stroked my shoulders. He brushed his hand up and down my back. feeling my vertebrae, and then stood in front of me and prodded my waist. 'Looking for your hip bones.' he explained. Bchind me again, he stared at my reflection before asking whether 1 was left-handed. 'Chronically,' I said. 'Thought so, you've got a drooping left shoulder.'

He started to go to work with his tape measure, calling out figures to Andrew who jotted them down in his notebook. Interspersed with the measurements was terse tailors' shorthand: DLS, PC, corp with PS', which translates as droopy left shoulder, prominent chest, corpulent with a prominent seat. Huh, I get enough of that sort of talk from my wife.

Ritchie told me that, on reflection, he couldn't make me a double-breasted waistcoat. 'It wouldn't work, sir. The bottom of it wouldn't meet your trousers, and you'd he all shirt and tie. In fact, I'd advise against any sort of waistcoat; it'd only make you look plumper, er, I mean plump.'

This was a severe blow. [felt as if I'd failed a medical for the army and been deemed unfit for active service. But I put my foot down and insisted on a singlebreasted one against Ritchie's advice. With lapels, too. He finally agreed and said that he'd use the old elastic-loop-attachingwaistcoat-to-a-special-trouser-button trick, to ensure that my shirt and belly didn't spill out. 'Which brings me to your sloping shoulders. We'll need quite a bit of extra padding there.' Beast.

The exciting prospect of being a welldressed swell about town was somewhat diminished by Ritchie's clinical — but sadly accurate — assessment of my bodily faults. My bum was too big, my stomach too fat, my shoulders too sloping and my legs too short. I've been aware of this for years, but it wasn't particularly agreeable having my idiosyncrasies so casually discussed and — worst of all — written down. When future biographers fall over themselves to tell my story and they see this description of me in my tailor's files, my reputation will be ruined. Ritchie must have noticed that I looked a little deflated, because he put his arm on the slopeiest of my two shoulders and said, 'You'll look a million dollars in this suit, sir, with a figure to die for. I promise.'

My beautiful, sleek, contemporary, cutting-edge new suit was delivered last week, in good time for the wedding feast, before which I decided to take it out for a test run, I like to think that I attracted a few admiring glances over dinner and, apart from getting in the way of a couple of dollops of carbonara sauce, the suit acquitted itself rather well. Well-fed and well-attired, my chum, Mark. and I headed off to Zeta. the bar beneath the Hilton in Park Lane. The joint was jumping and we joined the queue outside.

'I'm not, sir. Look, take your tie and jacket off and try and wacky yourself up a bit. We have a strict no-suit door policy here.'

We did as requested and were ushered in. I slung my jacket over a chair where some rotten hound knocked a pina colada over it. The dry-cleaners have promised to have it back by the wedding.