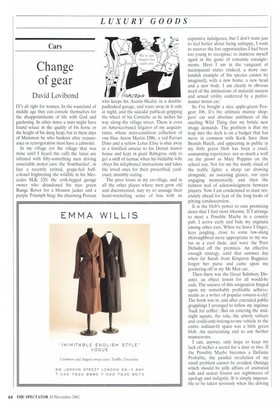 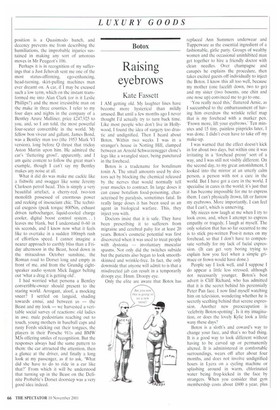 IT's all right for women. In the wasteland of middle age they can console themselves for the disappointments of life with God and gardening. In other times a man might have found solace in the quality of his horse or the height of his dung heap, but in these days of Mammon he who hankers after reassurance or reinvigoration must have a cabriolet.

In my village (or the village that was mine until I heard the call) the lanes are infested with fifty-something men driving unsuitable motor cars: the 'bombardier', in fact a recently retired, grape-fed halfcolonel frightening the wildlife in his Mercedes SLK 320; the cork-legged garage owner who abandoned his nice green Range Rover for a blouson jacket and a purple Triumph Stag; the charming Persian who keeps his Austin Healey in a doublepadlocked garage, and roars away in it only at night; and the suicidal publican gripping the wheel of his Corn iche as he inches his way along the village street. There is even an America-based litigator of my acquaintance, whose mint-condition collection of one blue Aston Martin DB6, a red Ferrari Dino and a yellow Lotus Elise is shut away in a fortified annexe to his Dorset manor house and kept in giant Babygros, only to get a sniff of tarmac when his biddable wife obeys his telephoned instructions and takes the loved ones for their prescribed, yardexact, monthly outing.

The poor loons in my ex-village, and in all the other places where men grow old and discontented, may try to assuage their heart-wrenching sense of loss with an expensive indulgence, but I don't want just to feel better about being unhappy, I want to recover the lost opportunities I had been too young to recognise: to immerse myself again in the game of romantic entanglements. Here I am in the vanguard of menopausal males (indeed, a more outlandish example of the species cannot be imagined), with a new home, a new head and a new body. I am clearly in obvious need of the intimations of material success and sexual virility conferred by a performance motor car.

So I've bought a nice apple-green Peugeot 106. It's the ultimate mumsy shoppers' car and absolute antithesis of the snarling Wild Thing that my brittle new image demands. The problem is that my leap into the dark is on a budget that has more in common with Kwik Save than Brands Hatch, and appearing in public in my little green blob has been a cruel, unmanning experience: not so much a wolf on the prowl as Mary Poppins on the school run. Not for me the manly ritual of the traffic lights: a sharp car drawing alongside, an assessing glance, our eyes engaging momentarily, and then the faintest nod of acknowledgment between players. Now I am condemned to stare resolutely ahead for fear of the long looks of pitying condescension.

It is the blob's power to ruin promising dates that I find most irksome. If I arrange to meet a Possible Maybe in a country pub. I arrive early and hide my stigmata among other cars. When we leave I linger, keys jangling, close to some low-slung thoroughbred more appropriate to my status as a cool dude, and wave the Poor Deluded off the premises. An effective enough strategy, until that summer day when fat Sarah from Kingston Bagpuize forgot her purse and came upon me pootering off in my Mr Men car.

Then there was the Great Salisbury Disaster, an object lesson for all would-be cads. The success of this assignation hinged upon my remarkably profitable achievements as a writer of popular romans-à-clef. The hook was in, and after extended public grapplings I arranged to follow my ingenue 'back for coffee'. But on entering the midnight square, the sole, the utterly solitary and could-only-belong-to-me vehicle in the entire sodium-lit space was a little green blob. An excruciating end to any further manoeuvres.

I can, anyway, only hope to keep my lack of inches a secret for a date or two. If the Possible Maybe becomes a Definite Probable, the painful revelation of my small problem cannot be avoided. Outings which should be jolly affairs of animated talk and sexual frisson are nightmares of apology and indignity. It is simply impossible to be taken seriously when the driving position is a Quasimodo hunch, and decency prevents me from describing the humiliations, the improbable injuries sustained in making any sort of amorous moves in Mr Peugeot's 106.

Perhaps it is in recognition of my sufferings that a Just Jehovah sent me one of the most status-affirming, ego-enhancing, head-turning, skirt-pulling machines man ever dreamt on. A car, if I may be excused such a low term, which on the instant transformed me into Alan Clark (or is it Leslie Phillips?) and the most irresistible man on the make in three counties. I refer to my four days and nights in the company of a Bentley Azure Mu[liner. price £247,925 to you, and, so 1 am told, the most powerful four-seater convertible in the world. My fellow bon viveur and gallant, James Bond, was a Bentley man too (the 1953 Mark VI version), long before Q thrust that tricksy Aston Martin upon him. He admired the car's 'fluttering growl', apparently, and I am quite content to follow the great man's example, though I can't say my Bentley makes any noise at all.

What it did do was make me cackle like a fishwife and swagger like some Jeremy Clarkson petrol head. This is simply a very beautiful artefact, a cherry-red, two-ton monolith possessed of enormous power and reeking of insouciant chic. The technical exegesis (peak torque 800Nm, exhaust driven turbocharger, liquid-cooled charge cooler, digital boost control system... ) leaves me blank, but I understand 0-60 in six seconds, and I know now what it feels like to overtake in a sudden 100mph rush of effortless speed. I cannot imagine a nearer approach to earthly bliss than a Friday afternoon in the Beast, hood down in the miraculous October sunshine, the Roman road to Dorset long and empty in front of me, and from the Grundig eightspeaker audio system Mick Jagger belting out 'what a drag it is getting old'.

I had worried what persona a Bentley convertible-owner should present to the staring world, Arrogant, aloof, a mocking sneer? I settled on languid, shading towards ennui, and between us — the Beast and my look — we harvested a veritable social survey of reactions: old ladies in awe, male pedestrians reaching out to touch, young mothers in baseball caps and rusty Fords sticking out their tongues, the players in their Porsche 911s and BMW M3s offering smiles of recognition. But the responses always had the same pattern to them: the car attracted the attention, then a glance at the driver, and finally a long look at my passenger, as if to ask, 'What did she have to do to ride in a car like that?' From which it will be understood that turning up in the Beast on the Definite Probable's Dorset doorstep was a very good idea indeed.