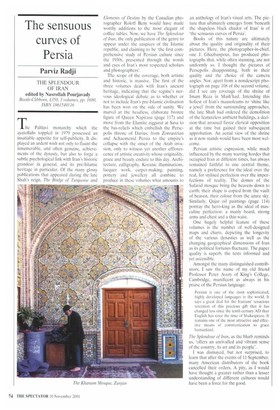 The sensuous curves of Persia

THE SPLENDOUR OF IRAN edited by Nasrollah Pourjavady Booth-Clihhoni, £350, 3 volumes, pp. 1680, ISBN 1861540116 he Pahlavi monarchy which the ayatollahs toppled in 1979 possessed an insatiable appetite for self-publicity. It displayed an ardent wish not only to flaunt the innumerable, and often genuine, achievements of the dynasty, but also to forge a subtle psychological link with Trans historic grandeur in general, and its pre-Islamic heritage in particular. Of the many glossy publications that appeared during the late Shah's reign, The Bridge of Turquoise and

Elements of Destiny by the Canadian photographer Roloff Beny would have made worthy additions to the most elegant of coffee tables. Now, we have The Splendour of Iran, the only publication of the genre to appear under the auspices of the Islamic republic, and claiming to be 'the first comprehensive study of Persian culture since the 1930s, presented through the words and eyes of Iran's most respected scholars and photographers'.

The scope of the coverage, both artistic and historic, is massive. The first of the three volumes deals with Iran's ancient heritage, indicating that the regime's nervous ideological debate as to whether or not to include Iran's pre-Islamic civilisation has been won on the side of sanity. We marvel at the headless, elaborate bronze figure of Queen Napirasu (page 117) and move from the Elamite ziggurat at Susa to the bas-reliefs which embellish the Persepolis throne of Darius; from Zoroastrian and Achaemenid Persia to the empire's collapse with the onset of the Arab invasion, only to witness yet another efflorescence of artistic creativity whose originality, grace and beauty endure to this day. Architecture, calligraphy, Koranic illuminations, lacquer work, carpet-making, painting, pottery and jewellery all combine to produce in these volumes what amounts to

an anthology of Iran's visual arts. The picture that ultimately emerges from 'beneath the shapeless black chador of Iran' is of 'the sensuous curves of Persia'.

Books of this nature are ultimately about the quality and originality of their pictures. Here, the photographer-in-chief, one J. Ghazbanpour, has produced photographs that, while often stunning, are not uniformly so. I thought the pictures of Persepolis disappointing, both in their quality and the choice of the camera angles. Nor, apart from a nondescript photograph on page 108 of the second volume, did I see any coverage of the shrine of Imam Reza in Mash'had. Intending this holiest of Iran's mausoleums to 'shine like a jewel' from the surrounding approaches, the late Shah had ordered the demolition of the featureless ambient buildings, a decision that aroused fierce clerical opposition at the time but gained their subsequent approbation. An aerial view of the shrine as it now stands would have been most welcome.

Persian artistic expression, while much influenced by the many warring hordes that occupied Iran at different times, has always remained faithful to one central theme, namely a preference for the ideal over the real, for stylised perfection over the imperfections of reality. The domes of the Safavid mosque bring the heavens down to earth; their shape is copied from the vault of heaven, their colour from the azure sky. Similarly, Qajar oil paintings (page 114) portray the hero-king as the ideal of masculine perfection: a manly beard, strong arms and chest and a thin waist.

One hugely helpful feature of these volumes is the number of well-designed maps and charts, depicting the longevity of the various dynasties as well as the changing geographical dimensions of Iran as its political fortunes fluctuate. The paper quality is superb, the texts informed and yet accessible.

Amongst the many distinguished contributors, I saw the name of my old friend Professor Peter Avery of King's College, Cambridge, munificent as always in his praise of the Persian language: Persian is one of the most sophisticated, highly developed languages in the world. It says a great deal for the Iranians' tenacious retention of this precious gift that it has changed less since the tenth century AD than English has since the time of Shakespeare. It remains one of the most attractive and effective means of communication to grace humankind.

The Splendour of Iran, as the blurb reminds us, 'offers an unrivalled and vibrant sense of the country, its art and its people'.

I was dismayed, but not surprised, to learn that after the events of 11 September, many American distributors of the book cancelled their orders. A pity, as I would have thought a greater rather than a lesser understanding of different cultures would have been a force for the good.