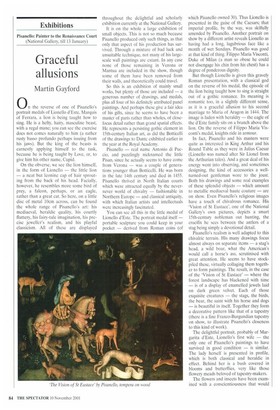 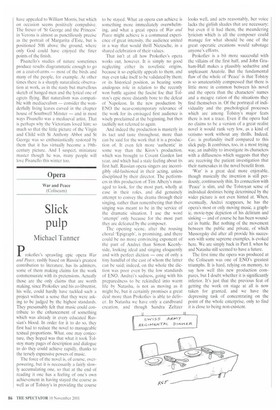 Pisanello: Painter to the Renaissance Court (National Gallery, till 13 January)

0 n the reverse of one of Pisanello's portrait medals of Lionello d'Este, Marquis of Ferrara, a lion is being taught how to sing. He is a hefty, hairy, masculine beast, with a regal mane; you can see the exercise does not comes naturally to him (a rather rusty basso profundo perhaps issuing from his jaws). But the king of the beasts is earnestly applying himself to the task, because he is being taught by Love, or, to give him his other name, Cupid.

On the obverse, we see the lion himself, in the form of Lionello the little lion — a neat but leonine cap of hair sprouting from the back of his head. Facially, however, he resembles more some bird of prey, a falcon, perhaps, or an eagle, rather than a great cat. So here, on a little disc of metal 10cm across, can be found the whole range of Pisanello's art: his mediaeval, heraldic quality, his courtly flattery, his fairy-tale imagination, his precise jeweller's realism, and his playful classicism. All of these are displayed throughout the delightful and scholarly exhibition currently at the National Gallery.

It is on the whole a large exhibition of small objects. This is not so much because Pisanello produced only such things, as that only that aspect of his production has survived. Through a mixture of bad luck and unsuitable technique, not many of his largescale wall paintings are extant. In any case none of those remaining in Verona or Mantua are included in the show, though some of them have been removed from their walls, and theoretically could travel.

So this is an exhibition of mainly small works, but plenty of those are included — a generous number of drawings, and medals, plus all four of his definitely attributed panel paintings. And perhaps these give a fair idea of his gifts, since he seems to have been a master of parts rather than wholes, of closefocus detail rather than grand spatial effects. He represents a persisting gothic element in 15th-century Italian art, as did the Botticelli of the drawings to Dante exhibited earlier in the year at the Royal Academy.

Pisanello — real name Antonio di Pucci°, and puzzlingly nicknamed the little Pisan, since he actually seems to have come from Verona — was a couple of generations younger than Botticelli. He was born in the late 14th century and died in 1455. Pisanello thrived in North Italian courts which were attracted equally by the nevernever world of chivalry — fashionable in Northern Europe — and classical antiquity, with which Italian artists and intellectuals were increasingly fascinated.

You can see all this in the little medal of Lionello d'Este. The portrait medal itself — portable sculpture you could keep in your pocket — derived from Roman coins (of which Pisanello owned 30). Thus Lionello is presented in the guise of the Caesars; that imperial profile, by the way, was skilfully amended by Pisanello. Another portrait on show by a different artist reveals Lionello as having had a long, lugubrious face like a month of wet Sundays. Pisanello was good at that kind of thing. Filippo Maria Visconti, Duke of Milan (a man so obese he could not disengage his chin from his chest) has a degree of ponderous dignity.

But though Lionello is given this gravely Roman presentation, with a classical god on the reverse of his medal, the episode of the lion being taught how to sing is straight out of a gothic romance. Its meaning is romantic too, in a slightly different sense, as it is a graceful allusion to his second marriage to Maria of Aragon in 1444. The image is laden with heraldry — the eagle of the d'Este family sits on a branch above the lion. On the reverse of Filippo Maria Visconti's medal, knights ride in armour.

In fact, Pisanello and his masters were quite as interested in King Arthur and his Round Table as they were in Julius Caesar (Lionello was named after Sir Lionel from the Arthurian tales). And a great deal of his energy went into observing, and sometimes designing, the kind of accessories a wellturned-out gentleman wore to the joust. Both his drawings and some real examples of these splendid objects — which amount to metallic mediaeval haute couture — are on show. Even Pisanello's religious images have a touch of chivalrous romance. His 'Vision of St Eustace'. one of the National Gallery's own pictures, depicts a smart 15th-century nobleman out hunting, the crucifix he sees between the antlers of a stag being simply a devotional detail.

Pisanello's realism is well adapted to this chivalric terrain. His many drawings focus almost always on separate items — a stag's head, a wild boar, what the American's would call a horse's ass, scrutinised with great attention. He seems to have stockpiled these, virtually collaging them together to form paintings. The result, in the case of the 'Vision of St Eustace' — where the forest landscape has blackened with time — is of a display of enamelled jewels laid on dark green velvet. Each of those exquisite creatures — the stags, the birds, the bear, the saint with his horse and dogs — is beautiful in itself. Together they form a decorative pattern like that of a tapestry (there is a fine Franco-Burgundian tapestry on show, to illustrate Pisanello's closeness to this kind of work).

The delightful portrait, probably of Margarita d'Este, Lionello's first wife — the only one of Pisanello's paintings to have survived in good condition — is similar. The lady herself is presented in profile, which is both classical and heraldic in effect. Behind her is a bush covered in blooms and butterflies, very like those flowery meads beloved of tapestry-makers.

The flowers and insects have been examined with a conscientiousness that would have appealed to William Morris, but which on occasion seems positively compulsive. The fresco of 'St George and the Princess' in Verona is almost as punctiliously precise as the portrait of Margarita d'Este, but is positioned 50ft above the ground, where only God could have enjoyed the finer points of the finish.

Pisanello's studies of nature sometimes produce results diagrammatic enough to go on a coat-of-arms — most of the birds and many of the people, for example. At other times there is a sharply naturalistic observation at work, as in the nasty but marvellous sketch of hanged men and the lyrical one of egrets flying. But naturalism was compatible with mediaevalism — consider the wonderfully living leaves carved in the chapter house of Southwell Minster — and in most ways Pisanello was a mediaeval artist. That is perhaps why the Victorians loved him; so much so that the little picture of the Virgin and Child with St Anthony Abbot and St George was so enthusiastically restored by them that it has virtually become a 19thcentury picture. And I suspect, miniature master though he was, many people will love Pisancllo this winter too.