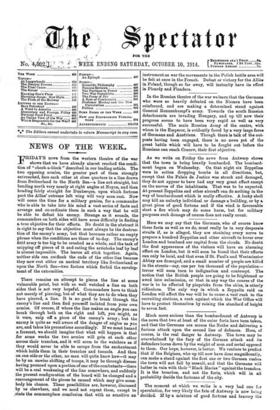 FRIDAY'S news from the western theatre of the war shows that we have already almost reached the condi- tion of "chock-a-block" described in our leading article. The two opposing armies, the greater part of them strongly entrenched, face each other at close quarters in a line drawn from Switzerland to the North Sea—a line not straight, but bending north very nearly at right angles at Noyon, and then heading fairly straight for Dunkerque, upon which fortress port the Allies' extreme left wing will very soon rest. Now will come the time for a military genius, for a commander who is able to take into his mind a vast series of facts and arrange and co-ordinate them in such a way that he will be able to defeat his enemy. Strange as it sounds, the commanders on both sides will have some difficulty in finding a true objective for their efforts. No doubt in the abstract it is right to say that the objective must always be the destruc- tion of the enemy's army, but that becomes rather an empty phrase when the conditions are those of to-day. The enemy's field army is too big to be crashed as a whole, and the task of snipping off pieces of it and eating the artichoke leaf by leaf is almost impossible. The leaves all stick together. Again, neither side can outflank the ends of the other line because they now rest either on neutral territory like Switzerland or upon the North Sea—two factors which forbid the envelop- ment of the extremities.