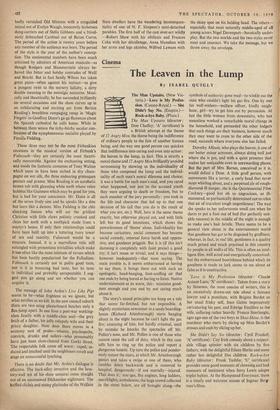 The Leaven in the Lump

By ISABEL QUIGLY The Man Upstairs. (New Vic- toria.)—Love is My Profes- sion. (Cameo-Royal.) — She Didn't Say No. (Empire.)— Rock-a-bye Baby. (Plaza.) The Man Upstairs (director : of ordinary people to the fate Of another human being, and the way one good person can quicken that indifference into caring and even into action : the leaven in the lump, in fact. This is strictly a moral theme and 12 Angry Men brilliantly avoided sermonising by showing us the individuality of those who composed the lump and the individ- uality of each man's moral dilemma and choice; it was a battle for each man's soul, and you cared what happened, not just 'to the accused youth they were arguing to death or freedom, but to each member of the jury personally : you took in the life and character that led up to that one decision of his (all that you do is the result of what you are, etc.). Well, here is the same theme exactly, but otherwise played out, and with little left but its good intentions, which shows the powerlessness of 'theme' alone. Individuality has become caricature, social comment has become social comedy, external force harsh and oppres- sive, and goodness priggish. But it is (if this isn't damning it completely with faint praise) a good try; it isn't mean or trivial, and it says things— however inadequately—that want saying. The main trouble is, it seems embarrassed at having to say them, it brings them out with such an apologetic, head-hanging, foot-scuffing air that one ends by being bored at having to listen. Native understatement at its worst, this : minimise good- ness enough and you end by not caring much about it.

The story's sound principles are hung on a tale that seems far-fetched, but not impossible. A slightly mysterious newcomer in a seedy boarding- house (Richard Attenborough) starts banging about in the night because he can't light the gas fire; annoying of him, but hardly criminal, until by mistake he knocks the spectacles off Mr. Pollen's nose, and Mr. Pollen is one of those who cannot resist the call of duty, which in this case tells him to ring up the police and report a siangerous lunatic. Up turn the police and ponder- ously mount the stairs, at which Mr. Attenborough panics and takes a swipe at one of them, who tumbles down backwards and is removed to hospital, dangerously—if not mortally—injured. That does it : tear-gas, fire engines, long ladders, searchlights, ambulances, the huge crowd collected in the street below, are all brought along—the symbols of authority gone mad—to winkle out the man who couldn't light his gas fire. One by one his well-wishers—welfare officer, kindly neigh- bour, girl—try to get him out by persuasion. At last the little woman from downstairs, who has meantime worked a remarkable moral change in the household, and persuaded the other lodgers that such things are their business, however much they may want to cross to the other side of the road, succeeds where everyone else has failed.

Dorothy Allison, who plays the leaven, is one of our better minor actresses, always doing well just where she is put, and with a quiet presence that makes her noticeable even in unrewarding places. But the part of Mrs. Barnes, conceived as it is, would defeat a Duse.' A little gruff person, with movements like a terrier, a curly head that never stops whirling about, and a perpetual air of rough- diamond ill-temper, she is the Quintessential Film Cockney—good but oh so ungracious, so ill- mannered, so puritanically determined not to relax that air of truculent tough ungentleness! The way she speaks to her unfortunate small son when he dares to put a foot out of bed (for perfectly suit- able reasons) in the middle of the night is enough to make one's hair bristle. There seems to be a general view about in the entertainment world that goodness has got to be disguised by gruffness; whereas, in fact, in real life, gentleness is a quality much prized and much practised in this country by people in all walks of life. This is often an intel- ligent film, well acted and energetically conceived; but the embarrassed boorishness behind which its goodness is made to lurk seems to me about as false as it is unattractive.

Love is My Profession (director : Claude Autant-Lara; 'X' certificate): Taken from a story by Simenon, the most concise of writers, this is an excessively drawn-out tale about a famous lawyer and a prostitute, with Brigitte Bardot as her usual frisky self, Jean Gabin impressively caricaturing his past, and Edwige Feuill&e as the wife, suffering rather heavily. Franco Interlenghi, ages ago one of the two boys, in Shoe-Shine, is the murderer who starts by slicing up Miss Bardot's dresses and ends by slicing up her.

She Didn't Say No (director : Cyril Frankel; `A' certificate): Coy Irish comedy about a respect- able village spinster with six children by five fathers; with the delightful Eileen Herlie and some rather less delightful film children. Rock-a-bye Baby (director : Frank Tashlin; 'U' certificate) provides some good moments of clowning and bad moments of sentiment when Jerry Lewis adopts triplet babies. At the Hampstead Everyman, there is a timely and welcome season of Ingmar Berg- man's films.