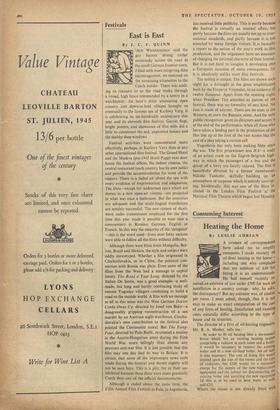 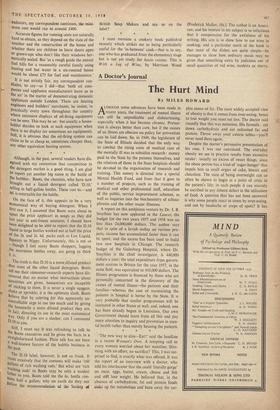 A NUMBER of correspondents have asked me to amplify comments I made recently on oil-fired heating in the home-- including one who complains that my estimate of £40 for fitting it is an underestimate. He had himself recently re- ceived an estimate of just under £500 for such an installation in a country cottage : why, he asks, the discrepancy? But my estimate was, of course, per room. I must admit, though, that it is not easy to make an exact computation of the cost of any form of heating. Installation and running costs naturally differ according to the type of house and its situation.

The director of a firm of oil-heating engineeI Mr. R. A. Mosley, tells me : In order to fit oil heating into a six-roomed house which has an existing heating systelll comprising a radiator in each room and a boiler, it would be necessary to remove the existing boiler and fit a new oil-fired boiler. An oil tang, is also necessary. The cost of doing this would depend upon the size of the rooms and the type of radiators, but £200 would be a minimum charge for the supply of the new replacement equipment and the labour for disconnecting the existing boiler and installing the new equipment (if this is to be used to heat water as well, add £25). Where the house is not already fitted with radiators, my correspondent continues, the mini- mum cost would rise to around £400.

Accurate figures for running costs are naturally hard to obtain, as they depend on the state of the weather and the construction of the house and whether there are children to leave doors open or grown-ups who don't like their windows her- metically sealed. But 'as a rough guide the annual fuel bills for a reasonably careful family using heating and hot water in a six-roomed house would be about £75 for fuel and maintenance,' It is not strictly fair, my correspondent con- cludes, to say—as I did—that 'both oil com- panies and appliance manufacturers leave us in the air' in the matter of demonstrating domestic appliances outside London. There are heating engineers and builders' merchants, he insists, in practically every town throughout the country Where extensive displays of oil-firing equipment can be seen. This may be so: but usually a house- holder decides to look at such equipment when there is no display (or sometimes no equipment). Still, it is obvious that the oil-firing system can claim to be as cheap as, sometimes cheaper than, any other equivalent heating system.

Although, in the past, several readers have dis- agreed with my contention that competition in the detergent market is a good thing, I am glad to report yet another big name in the battle of the bubbles : Boots, the chemists, who have now brought out a liquid detergent called 'D.10,' selling in half-gallon bottles. These cost 6s.—and 6d. is returnable for the bottle.

On the face of it, this appears to be a very economical way of buying detergent. When I first saw it, I assumed that Boots were about to upset the price applecart in soaps as they did last year in anti-freeze mixtures. I should have been delighted to be able to report that the D.10 liquid in large bottles worked out at half the price of the 2s. and 2s. 6d. packs such as Lux Liquid, Squeezy or Nippy. Unfortunately, this is not so —though I feel many Boots shoppers, lugging the enormous bottles away, are going to think it is.

The truth is that D.10 is a more diluted product that most of the other liquid detergents. Boots tell me their consumer-research experts have dis- covered that no matter what instructions about quantities are given, housewives are incapable of sticking to them. It is never a single squeeze, shake or sprinkle; it is the optimum slosh. Boots believe that by catering for this apparently un- controllable urge to use too much and by giving the housewife a more diluted product they are, In fatt, directing its use in the most economical WaY. Only if you are a slosher, can I commend 13.10 to you .

Still, I must say it was refreshing to talk to the Boots executives and be given the facts in a straightforward fashion. Plain talk has not been a well-known feature of the bubble business in the Past.

The D.10 label, however, is not so frank. It states evasively that the contents will make '160 gallons of rich washing suds.' But what are 'rich washing suds' to. Boots may be only a modest lather to you. Boots told me the 6s. bottle con- tains half a gallon; why on earth do they not follow the recommendation of the Society of British Soap Makers and say so on the label?

I must mention a cookery book published recently which strikes me as being particularly useful for the 'in-between' cook—that is to say, one who has graduated from the elementary stage but is not yet ready for haute cuisine. This is With a Jug of Wine, by Morrison Wood (Frederick Muller, 18s.). The author is an Ameri- can, and his interest in his subject is so infectious that it compensates for the awfulness of his writing. His aim is to show how to use wine in cooking; and a particular merit of the book is that most of the dishes are quite simple—he manages to show how ordinary meals may oe given that something extra by judicious use of small quantities of red wine, madeira or sherry.